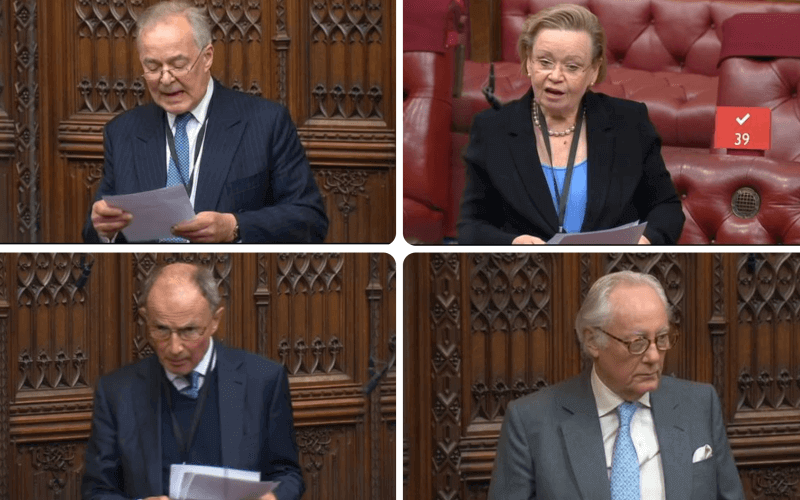 The Conservative party has refused to act after four of its peers delivered an “extremely alarming” and disablist “barrage of attack” on disabled members of the House of Lords.

The four Tory peers were all arguing that the Lords should quickly return to “normal” and end the adjustments that have allowed disabled members and those shielding from coronavirus to vote and take part in debates from their homes during the pandemic.

One of the Conservative peers argued that “personal infirmity should not provide grounds for exemption from normality” and that continuing the adjustments post-pandemic would be “extending the logic of equality beyond reason”.

Another suggested that those members who “cannot or will not” attend the House of Lords should retire as peers, while a third said that it was “inconceivable that those who aspire to take part in the governing of this nation should not make the effort to attend parliament, whatever the difficulties”.

Their comments came as the government prepares to publish its cross-government national disability strategy, which disability minister Justin Tomlinson has claimed will “remove barriers and make this country more inclusive for disabled people”.

The adjustments introduced by the authorities in the House of Lords have allowed disabled peers such as Baroness [Jane] Campbell and Baroness [Sal] Brinton – who have both had to shield from the virus – to continue to play an important part in parliamentary proceedings during the pandemic.

Many peers told the debate on the use of remote participation and so-called hybrid sittings in the Lords that some of the measures introduced during the pandemic – which include online voting and allowing some peers to take part in debates virtually – should continue when the crisis ended.

Baroness Campbell, a crossbench peer, said that the “capacity to join in remotely has swept away many of the barriers that some of us encounter daily” and she called for the “best aspects” of the hybrid model to be retained post-pandemic.

She said it had been “a relief to watch debates at home on my night-time ventilator and to vote. It improved my focus, decision-making and health.

“As a result, I worked harder, longer and more effectively than ever I had done before the pandemic. Yes, I did my duty better.

“Surely remote working should at least be seen as a ‘reasonable adjustment’ under the Equality Act.”

The Liberal Democrat leader in the Lords, Lord Newby, said there was “a strong case for allowing those who have a disability that makes attending the House difficult to retain the option to participate virtually on a permanent basis”.

The crossbencher Baroness Finlay said the Lords “needs diversity and has shown inclusiveness this year” and “must work in a way that enables everyone to contribute their expertise”, which “means changing our approach, not putting the old barriers and hurdles back in place”.

But the four Tory peers each suggested that if their colleagues were not able to attend the House of Lords in person once the worst of the crisis was over, they should not be allowed to contribute at all.

Lord Farmer, a former treasurer of the Conservative party, said that extending hybrid arrangements post-pandemic would be “another example of extending the logic of equality beyond reason”.

After the debate, Baroness Brinton, the Liberal Democrat health and social care spokesperson in the Lords, who has been working from home for the last 14 months to allow her to shield, described the comments of the Tory peers as “an extraordinary barrage of attack on disabled peers and those with underlying conditions that puts them on the clinically extremely vulnerable list”.

She told Disability News Service (DNS): “A number of Conservative peers were telling us to retire because they believed that our ‘infirmity’ or ‘unsound body or mind’ meant that we couldn’t attend the House of Lords, so we weren’t worthy of our place in it.

“Those same peers felt it was more important to put the clerks to the Lords back in their wigs, than make any reasonable adjustments for their disabled colleagues.”

She added: “Frankly, it is hard enough to work or visit parliament with a disability out of pandemic.

“But for many of us – not just peers – those barriers became much worse last week, when a number of noble Conservative Lords told us that there was no place at all for some disabled people in parliament.”

Baroness Campbell said the comments of the Tory peers had been “hard to hear”.

But she said she had been “heartened by others’ support for creating a more progressive and inclusive way of working, so I am trying to reflect on that, rather than narrow-minded comments which clearly demonstrate a dated understanding of what a modern parliamentarian can contribute brilliantly, via different means”.

She told DNS: “I believe their truth is haunted by their own fears of losing identity and influence.

“But there really is room for everyone to participate fully in different ways, making parliament stronger, more relevant and, most importantly, democratic.

“If we do not modernise in a fully inclusive way, the House of Lords will wither and die on the vine.”

She said: “These comments are extremely alarming, especially given that disability hate crime is on the rise.

“If the Conservative party do not take action against these peers, it will only serve to reinforce the message that they think disabled people are an inconvenience.

“With so few disabled politicians in parliament, it is obvious that the way we do business needs to change, reform and become more inclusive.

“A more representative parliament would ensure disabled people’s voices were at the heart of decision-making, instead of them constantly feeling like an afterthought.

“MPs and peers should be raising the issues that disabled people face and seeking to build a more inclusive society.”

Neither the Conservative party nor Justin Tomlinson’s Disability Unit had answered questions about the comments made by the four Tory peers by noon today (Thursday).