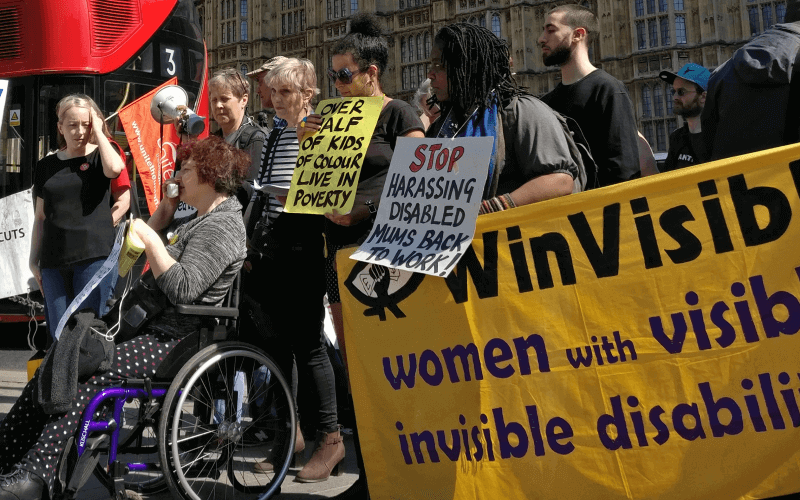 A disabled woman’s tribunal victory has given hope to claimants who cannot take part in face-to-face benefit assessments for impairment, health, or trauma-related reasons, but then have their claims ended by the government for “failure to attend” their appointments.

Jane* spent two years fighting for her benefits to be reinstated, with support from the grassroots group WinVisible** and the charity Child Poverty Action Group, before the Department for Work and Pensions (DWP) conceded defeat at the upper tribunal.

WinVisible said disabled people who cannot attend face-to-face assessments for health reasons or after surviving trauma or even abuse or sexual violence had become “easy targets” for DWP.

Among those claimants WinVisible has helped is a cancer patient who missed four assessment dates while struggling to cope with her diagnosis and clashing NHS appointments.

It has also highlighted Jane’s case.

She is an older woman, from the East Midlands, who has been disabled for 40 years and was previously claiming the highest rates of disability living allowance.

She had been receiving DLA since its introduction in 1992 until she had it suddenly removed by DWP in March 2018 for “failure to attend” a face-to-face assessment, after she was reassessed as part of the introduction of the new personal independence payment (PIP).

Her request for a home visit in the afternoon so she could prepare for the assessment was refused by the outsourcing company Capita.

Then her request for the assessment to be carried out on paper – because of the anxiety the process was causing her – was refused.

She had her benefits cut off after a failure to agree a suitable appointment time.

When she appealed but was unable to attend the tribunal for impairment-related reasons, she was branded “un-cooperative” by the tribunal panel, which rubber-stamped the DWP decision.

She was left with no disability benefits and unable to leave the house without someone to push her manual wheelchair. She also passed the age of 65, and so had to apply for attendance allowance, which has no mobility component.

She would have given up the fight if she had not come across WinVisible when searching online for help.

Months of legal discussions, overseen by a tribunal judge, eventually saw DWP concede defeat, and agree that a fresh PIP claim could be decided only on paperwork, with the help of further medical evidence gathered by WinVisible.

The judge has now approved a “consent order”, which has seen DWP agree to award Jane the enhanced rate of PIP indefinitely – both for daily living and mobility – as well as more than £10,500 in backdated payments.

Claire Glasman (pictured, front left, speaking), from WinVisible, said: “‘Failure to attend’ is a big issue for sick, severely disabled and traumatised claimants, such as survivors of abuse and sexual violence being assessed by strangers.

“And those of us who are immigrant and refugee women face racism, where psychiatric reports about trauma are dismissed.”

She added: “A man who had an epileptic seizure on the day of his interview and was hospitalised, recently also won at upper tribunal.

“We are easy targets for the DWP to dismiss our claims in this way. As disabled claimants, we are expected to accept needless and stressful reassessments, and appointments at any time, even 9am on a Sunday morning.”

She pointed out that Jodey Whiting, who took her own life in February 2017 after being wrongly found “fit for work” following a missed work capability assessment, also lost her benefits because of a “failure to attend” decision by DWP officials.

Glasman said changes to the system were promised to Whiting’s mother, Joy Dove, but instead the system was “getting worse”.

She said: “Most services tell people to comply with the current system and are judgemental against women.

She said WinVisible was instead providing information and support for disabled women to fight their cases, highlighting the discrimination in the system, and pointing out that exemptions from “stressful” face-to-face interviews are provided for in regulations and DWP guidance.

She said: “We also try to overcome the indifference, bureaucracy and delay which exhausts sick and disabled people into giving up, by asking MPs and senior officials to intervene.”

Glasman added: “Disabled people, and disabled women especially who are dealing with added issues such as domestic violence and caring responsibilities, feel very strongly that the benefits system should not treat us like malingerers and scroungers, and should respect our rights.”

**WinVisible is based in London but is often contacted by disabled women across England, Scotland and Wales, and welcomes volunteers, with its casework and advocacy financially supported by the Oak Foundation and the National Lottery Community Fund