You are here: Home / Activism and Campaigning / Trio of disabled campaigners back Changing Places petition 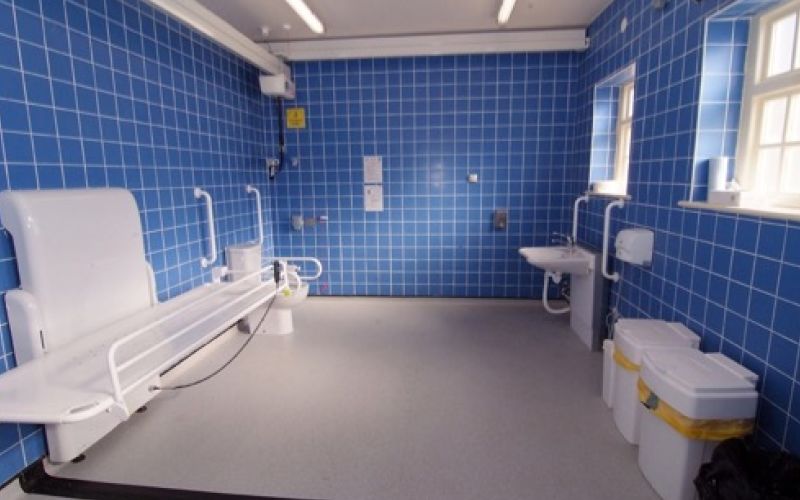 Three leading disabled campaigners have backed a petition that calls on the government to force all new large buildings to include a Changing Places toilet.

The petition, launched by Lorna Fillingham, who has a disabled child, has now been signed by more than 50,000 people, and will soon be delivered to the prime minister.

The campaign has been boosted by support from the crossbench peer Baroness [Jane] Campbell – herself a regular user of Changing Places toilets – Paralympian Anne Wafula Strike, and journalist and presenter Mik Scarlet.

There are currently only about 1,060 Changing Places toilets (pictured) – facilities with extra space and equipment for disabled people who cannot use standard accessible toilets – across the whole of the UK, even though there are believed to be more than 250,000 disabled people who need them.

Guidance provided under British Standard 8300 recommends that such facilities should be included in larger buildings and complexes such as motorway services, sports stadiums, shopping centres, airports, town halls, schools and hospitals.

But Fillingham, who is working closely with Wafula Strike on the campaign, wants the government to make changes to building regulations to ensure that planning permission cannot be granted for such developments unless they include a Changing Places toilet.

The call in Fillingham’s petition mirrors a recommendation in last year’s report on disability and the built environment by the Commons women and equalities committee, which called for all large building developments to include a Changing Places toilet.

“I heavily rely on Changing Places facilities and their absence does hamper my ability to accept certain engagements far from home or work.

“Parliament has an excellent Changing Places facility which means I can carry on with my work to the early hours.”

Wafula Strike said: “Every human being has a right to access a toilet and it’s very sad that a section of the disabled community are not able to use suitable facilities to change in.

“It breaks my heart that in the 21st century disabled people, their parents and carers are denied this basic right.”

He said Changing Places facilities were “essential for a forward-looking business that wants to future-proof any major project.

“Imagine if every train and bus station in every town had a Changing Places toilet, how that would change lives.”

But he said that for too long the building industry had provided only those facilities that had to be included under building regulations.

He said: “Changing Places toilet provision has to be put into building regulations or we’ll see no real change.

“But it would be nice if architects and developers put them in before this happens, to future proof and do the right thing.”

Fillingham says in her petition that her seven-year-old daughter is now “too large for a baby changing unit and our only other option is the toilet floor, which is unsanitary, unhygienic and in my mind inhumane as well as undignified.

“I don’t know what body fluids may have spilled there, or what might have been brought in on someone’s shoes or wheels.

“This is a completely unacceptable and unreasonable situation for anybody to be exposed to.”

She told DNS this week: “It really is time for change.

“I’ve heard too many harrowing stories now, of disabled children being changed on toilet floors and of disabled adults having surgery to have suprapubic catheters fitted in order to avoid having to use the loo when they are out and about as there is such a lack of Changing Places facilities.”

A spokesman for the Ministry of Housing, Communities and Local Government said: “We know that providing these accessible toilets is very important for some people with disabilities so we have worked with Mencap and the Changing Places campaign to improve facilities.

“There are now 1,060 of these toilets across the UK, up from just 140 in 2007, and we have helped fund the development of a new website so people know where to find them.”

He said the department was committed to promoting accessibility and had commissioned research to assess whether guidance in the building regulations “adequately meets the needs of disabled people when new building work is carried out.

“We will consider the findings of that research as they relate to Changing Places toilets and how to promote their provision further.”

Asked if the department would consider making the inclusion of a Changing Places toilet compulsory for new larger buildings and complexes, he declined to comment further.