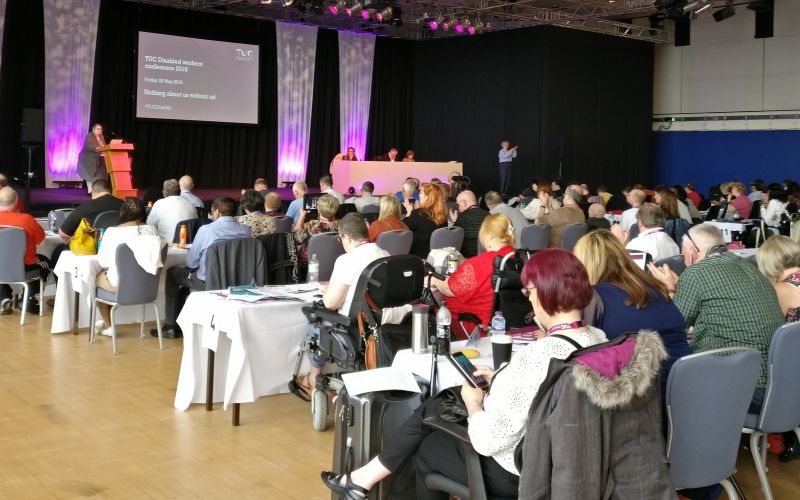 Disabled trade unionists have called on the TUC and unions across the country to campaign for the UN disability convention to be incorporated into UK law.

Disabled members of 22 unions, who were at the annual TUC Disabled Workers’ Conference in Bournemouth (pictured), voted unanimously for a motion calling for a national campaign on the issue.

The conference was held just a few months after the UN’s committee on the rights of persons with disabilities (CRPD) told a UK government delegation that its cuts to social security and other support for disabled people had caused “a human catastrophe”.

The UN committee called on the UK last autumn to make more than 80 improvements to the ways its laws and policies affect disabled people’s human rights.

But delegates in Bournemouth heard that the UN Convention on the Rights of Persons with Disabilities (UNCRPD) was not legally binding in the UK, and so the government was free to continue breaching any of its articles.

David Chrimes, of the FDA union, which represents senior public servants and professionals, who proposed the motion, told the conference about his brother, Richard, whose case was featured by the BBC earlier this year.

Richard Chrimes has to crawl up and down his stairs several times a day – and crawl from his front door to his car – because there is not enough space to adapt his two-storey house to make it accessible for him or even to fit his wheelchair through the front door.

He can’t afford to move to an accessible house, and after several years his council has failed to find him somewhere suitable to live.

Chrimes, a lawyer himself, told the conference that if UNCRPD was incorporated into UK law, his brother would have been able to take legal action under article 19 – on independent living – against the local council and housing association and force them to rehouse him.

He said he had “tried everything” to find his brother appropriate accommodation, including seeking advice from a human rights lawyer, but had reached the conclusion that the solution was to incorporate UNCRPD into UK law.

David Bell, from the union Unite, who supported the motion, said that incorporating the convention into UK law would help disabled people find and keep employment.

He called for a campaign “for the convention to be given its rightful place in UK law”.

Brian Aylward, from the Musicians’ Union, who was involved in negotiating the UN convention in the 2000s, when it was being drawn up, compared the UNCRPD call with the incorporation of the European Convention on Human Rights (ECHR) into UK law through the Human Rights Act.

He said: “I remember the arguments that the floodgates would open and all hell would break lose.

“I remember [instead] how transformative it was and how real and meaningful it was for the rights of disabled people.”

Earlier, Richard Rieser, from the National Education Union, told the conference that the UN’s report last autumn had been useful because it “nails the British government to the ground”.

Rieser, who proposed a motion calling for TUC to push for the CRPD findings to be implemented fully by the government – which was also passed unanimously – said: “They haven’t really answered all the charges made by the UN and nor will they.”

But he said he did believe that the UN report had “softened” the government, and he pointed to work and pensions secretary Esther McVey’s decision not to appeal against a court ruling that found that new personal independence payment rules were unlawful, “blatantly discriminatory” and breached the convention.

He added: “If you have meetings with Conservative MPs, call them out on [the CRPD report].

“We need to use these things to our advantage.”

Natasha Hirst, from NUJ, the journalists’ union, paid tribute to the “incredibly hard work and meticulous evidence-gathering” of the delegation of disabled people’s organisations that had visited the UN last March and August as part of the process that led to CRPD’s damning verdict on the UK government.

She said: “That made a massive difference in terms of the outcome from the UN committee.

“For them to call this a human catastrophe is very strong wording from the UN.”

Despite the committee’s conclusion, she said, there had not been “any real change in the lives of disabled people in the UK”.

She said: “We need solidarity from non-disabled people, unions, workplaces, friends and families and to say our rights are equal to yours, they are just as important, we are not some unworthy group of people.

“Please help people to understand why the UN convention is so important and get some solidarity for us all.”