You are here: Home / Benefits and Poverty / TUC piles pressure on Labour with vote to scrap universal credit 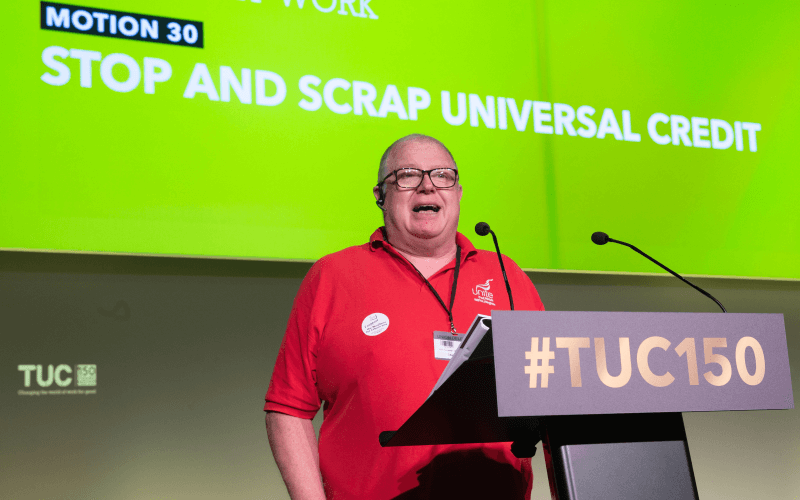 Trade unions have voted at their annual congress to call on the Labour party to shift its stance on universal credit and promise to scrap the controversial benefit system.

The motion called on TUC’s general council to tell the next Labour government to “stop and scrap” universal credit and carry out “far-reaching social security reform that truly makes work pay” and protects those unable to work.

Labour’s policy is currently to simply “pause and fix” universal credit rather than scrapping it.

The motion said universal credit – which combines six benefits into one – was a “draconian” system that had left many people in “debt, eviction and hunger”.

It pointed out that workers could – for the first time – face “savage sanctions for not demonstrating that they are seeking to improve their paid income”, while “part-time workers could be forced to leave work that suits their disability or family life for a worse paid, full-time job”.

Dave Allan, chair of the national disabled members’ committee of Unite the Union, proposed the motion on behalf of the TUC disabled workers’ committee, and it was seconded by Mandy Hudson, of the National Education Union.

Allan (pictured, proposing the motion) told delegates that the disabled workers’ committee had worked tirelessly to warn of the impact of universal credit and its roll-out, which he said would “fall like a hammer blow upon seven million households – including one million low-paid workers”.

He said there had been an “utter lack of support” for disabled claimants, while the “cruel programme of sanctions” was “landing on claimants like a series of bureaucratic punishment beatings”.

Allan said the “misery” and “destruction” caused by universal credit was no accident.

He said: “This is the cold, calculated and systematic impoverishment of disabled people. This is malice by design.”

He added: “A pause of the roll-out will not do. We are not just calling on the government to simply ‘think again’.

“We are calling for the immediate, unconditional and total ban on universal credit.”

Allan told Disability News Service this week that the TUC vote had been unanimous and that the next step was to persuade the Labour party to commit to scrapping universal credit and include that pledge in its manifesto for the next general election.

TUC general secretary Frances O’Grady added: “All politicians need to look at the disastrous effects universal credit is having around the UK, at how hard disabled people have been hit and how it is pushing people into rent arrears and poverty, leaving them turning to food banks.

“The roll out of universal credit should be stopped, before it continues to inflict more damage.

“And a fundamental rethink is required of the social security system, and how it can deliver a fair and dignified system for everyone.”

A TUC spokesman stressed afterwards that O’Grady was calling for universal credit to be scrapped and not just to “stop and fix” the system.

He said: “The TUC policy is not stop and fix. Our congress endorsed a policy of stop and scrap.

“The immediate priority has to be to stop the rollout, as that is the immediate danger to disabled people.

“But the current universal credit is not fit for purpose and TUC staff will now pursue the direction set by congress by developing policy for a system to succeed it that better meets the needs of disabled people and others who rely on social security.”