The UN expert who told the government that its cuts to disabled people’s support had caused a “human catastrophe” is to visit the UK this autumn to deliver a high-profile lecture on disability rights.

Theresia Degener, the professor of law and disability studies who chairs the UN committee on the rights of persons with disabilities, will deliver the first Caroline Gooding Memorial Lecture at the University of Leeds in October.

Last August, Degener (pictured) told the UK government’s delegation – during a public examination of its progress on implementing the UN Convention on the Rights of Persons with Disabilities (CRPD) – that its cuts to social security and other support for disabled people had caused “a human catastrophe” which was “totally neglecting the vulnerable situation people with disabilities find themselves in”.

She later gave an interview with the BBC – which was not broadcast – in which she warned that the portrayal of disabled people by the UK government and media as “parasites” who live on benefits could put them at risk of violence, and even “killings and euthanasia”.

The annual lecture was set up as a memorial to the equality consultant and author Caroline Gooding, who played a leading role in securing improvements to disability rights legislation as a member of the Disability Rights Taskforce.

Gooding was later director of legislative change at the Disability Rights Commission throughout its eight years. She died in July 2014.

The lecture will be hosted by the university’s renowned Centre for Disability Studies (CDS) and its Centre for Law and Social Justice, and will take place on 3 October.

Professor Anna Lawson, director of CDS and co-ordinator of the university’s Disability Law Hub, said she and fellow organisers were “delighted” that Degener was able to accept the invitation to deliver the lecture.

She said: “She is a disabled woman who, like Caroline, has made it her life’s work to push for disability equality and inclusion using the law.

“As chair of the CRPD committee, she occupies what is one of the most influential positions in disability rights globally.

“The fact that her committee has recently reviewed and made recommendations to the UK on its implementation of the CRPD makes the timing particularly good.

“Theresia also knew and admired Caroline and her work.”

She said the lecture would not be focused specifically on the UK but would be “relevant to all countries that have ratified the CRPD, including the UK”.

Lawson said there would be questions and discussion after the lecture, while there are hopes that the event will be live-streamed.

Degener will lecture on “inclusive equality”, a concept introduced by the UN committee through a “general comment” in March and which it hopes can be used to help implement CRPD.

Inclusive equality, the general comment says, argues for redistribution to address socioeconomic disadvantage, and attempts to combat “stigma, stereotyping, prejudice and violence” and recognize the “dignity of human beings and their intersectionality”.

It also recognises the importance of including different social groups in society, but also the need to “make space for difference as a matter of human dignity”.

In the general comment on article five of the convention – on equality and non-discrimination – the committee warns that countries are still approaching disability through charity and medical models, which fail to fully acknowledge disabled people’s rights.

It also warns that the laws and policies of many countries “perpetuate the exclusion and isolation of and discrimination and violence” against disabled people, and that they are often “imperfect and incomplete or ineffective” or “reflect an inadequate understanding of the human rights model of disability”.

In the BBC interview, Degener explained that, compared to other countries with “less economic power” and less advanced equality and discrimination legislation, the UK’s austerity policy was “less human rights oriented”, so that “UK appears to be a strong country when it comes to equal rights but a very, very weak country with relation to economic, social and culture rights”.

She also said the UK’s record on disability rights was “going backwards in a pace and to an amount that it worries us a lot” and that the evidence in front of the committee was “overwhelming”.

The general comment also says that disabled people’s organisations (DPOs) must “play a central role in the development of legal and policy reforms”, including the response to the prejudice faced by disabled people seen as being “a burden on society”.

The committee’s concluding observations, which followed its public examination of the UK’s progress in implementing the convention last August, called on the government to do more to include DPOs in planning and implementing polices affecting disabled people.

Degener was not available this week to comment on her plans for the lecture. 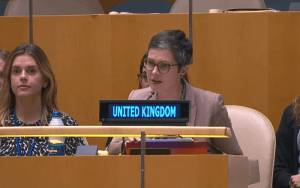