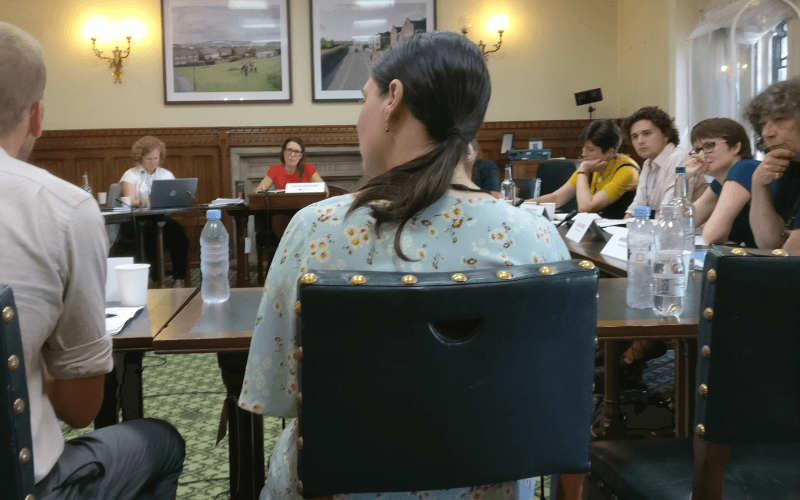 A key piece of government legislation that slashed social security payments to disabled people and families with children has led to infant deaths, poor health and severe food poverty, activists, policy experts and academics have told a parliamentary inquiry.

The inquiry, being held by the all party parliamentary group for health in all policies, chaired by Labour’s Debbie Abrahams, is examining the impact of the Welfare Reform and Work Act 2016 on children and disabled adults.

A string of experts lined up to warn the inquiry of the severe impacts of the act, including measures such as the lowering of the benefit cap, the working-age benefits freeze, the cuts of nearly £30 a week to payments to those in the work-related activity group of employment and support allowance, and the two-child limit to the child element of child tax credit and universal credit.

Among the most striking pieces of evidence, the inquiry heard there have been 600 more infant deaths than would otherwise have been expected between 2014 and 2017 in England, with about 200 of them likely to have been caused by rising levels of child poverty.

Professor David Taylor Robinson, a professor of public health and policy at the University of Liverpool’s Institute of Population Health Sciences, said these “very, very unusual rises in child mortality” had been seen in the most deprived areas of the country.

He said there was also likely to be a significant health impact on other children in deprived areas as they aged, and that families were “living in a state of profound anxiety about how to get by from one day to the next”.

He said: “Poverty is absolutely toxic for children’s life chances. The things we are seeing now in terms of mortality are a very concerning initial indicator that things are going wrong.”

He stressed the importance of “considering what is going on with mortality. This is a profoundly unusual demographic change we are seeing at the moment.

“We are used to seeing life expectancy in countries that are doing well increase year on year.”

But he said life expectancy had plateaued since 2010 and was now falling in deprived areas, which was “an unprecedented shift”.

He added: “People are not talking about life expectancy and I don’t think the public are aware of the profound nature of these changes.”

Dr Aaron Reeves, an associate professor in social policy and intervention at the University of Oxford, said there was “preliminary evidence” that the benefits freeze was “contributing to food poverty”.

And he said that cuts to social security had had negative implications for mental health and had pushed people further from the jobs market.

He said that “food insecure” families were “much more likely to experience mental health problems” as “food insecurity is a source of stress and anxiety”.

He said that the proportion of people who were “food insecure” had been “rising dramatically but is concentrated among those who are disabled”, while many of those who were experiencing food insecurity did not have local food banks available to them.

He said the government’s benefit sanctions regime was partly to blame (see separate story), adding: “It is disabled people and lone parents who are disproportionately affected by sanctions, partly because their lives are more difficult organisationally.

“They are people who find it difficult and therefore fall foul of the claimant commitment.”

The all party group also heard from charities, thinktanks and the grassroots group Disabled People Against Cuts (DPAC) (pictured).

Jasmine Basran, a senior policy officer at Crisis, told the evidence session that her charity was hearing from disabled people who were being forced to use their disability benefits to make up the difference between the housing benefit they received and the rent they needed to pay.

She said this was leading to fears of homelessness, particularly among those who have lost their entitlement to personal independence payment, and that it was causing severe anxiety and exacerbating health conditions.

Another to give evidence was Tom Pollard, now an associate at the Demos thinktank and a trainee mental health social worker, but previously part of the policy and campaigns team at the charity Mind.

Pollard spent 18 months on secondment from Mind, advising the Department for Work and Pensions on mental health policy issues.

He called in his evidence for DWP to be stripped of its responsibility for supporting disabled people into work.

He said a key problem was that if DWP policies have a negative impact on people’s mental health this does not “come back to bite them” because the department does not collect those figures.

Pollard said that jobcentres were “totally unconducive to supporting people with mental health conditions”, although their staff “do their best”.

He said: “The chips are so stacked against them because it is a system that is totally not right.”

He said DWP had a history of being “reasonably effective” in moving people who had lost their jobs back into employment “reasonably quickly”, but he added: “That is the one lever they have to pull, so they keep pulling it”.

He said: “I wouldn’t have DWP responsible for anyone with more complex circumstances.

“They have a very fixed view of seeing the world and this stuff doesn’t really fit that picture.”

Pollard also dismissed DWP’s repeated claims that removing the WRAG payment of nearly £30 a week – a policy brought in in 2017 – would act as an incentive to help disabled people into work.

He said the evidence he had seen among people with mental health problems was that cutting the WRAG payment had had “exactly the opposite effect” and instead encouraged a “siege mentality”, with people desperate to get into the support group (and its equivalent in the universal credit system), for those who do not need to take part in any work-related activity.

He said: “People’s mindset is one of trying to hunker down and maintain some form of stability.”

Ellen Clifford, a member of DPAC’s national steering group, said the lack of evidence for the government’s regime of sanctions and strict conditions that need to be met by out-of-work benefit claimants was “absolutely shocking”.

She said: “There is now overwhelming evidence that it is actually counter-productive.

“There are policies being implemented that are having a detrimental impact on people’s health and yet they are not being rigorously tested before implementation. In fact, quite the opposite.”

And she highlighted the flawed legal system that made it hard to challenge the discriminatory impact of the government’s social security reforms.

Clifford also pointed to new research published this month by the mayor of London, which showed the dramatic impact of the government’s welfare reforms on disabled Londoners (see separate story).

DPAC researcher Anita Bellows told the evidence session that many disabled people were “becoming invisible” on universal credit because the way DWP was publishing its statistics was often making it impossible to see what was happening to them.

She said some disabled people who would eventually be found “not fit for work” were being sanctioned under universal credit while awaiting their work capability assessment, while that sanction was staying with them even though they were then placed in a group whose members should never be sanctioned because of their high support needs.

She said the way the universal credit figures are published means that it is impossible to know how many disabled people are in this situation.