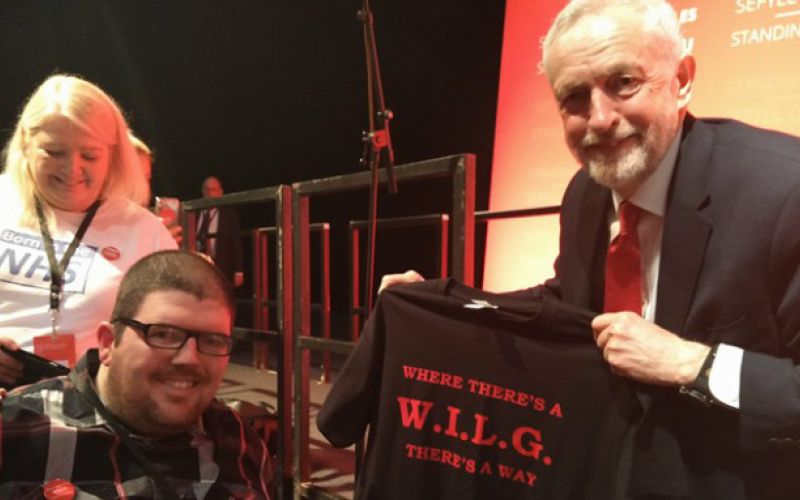 A disabled activist who has campaigned to save the Welsh Independent Living Grant (WILG) is celebrating after the Welsh Labour annual conference voted to back his campaign.

Nathan Lee Davies has led a campaign to force the Labour-run Welsh government to reverse its decision to scrap the grant, which was introduced to support disabled people with high support needs in Wales to live independently after the UK government closed the Independent Living Fund in 2015.

An estimated 1,300 people in Wales receive support through the WILG scheme.

And this week, at their annual conference, members of Welsh Labour voted in favour of a motion that called on their government to maintain WILG, at least until the next Welsh assembly elections in 2021.

Before the vote, Davies had also secured support from Labour’s UK leader, Jeremy Corbyn, who posed for a picture holding one of the campaign’s “WHERE THERE’S A W.I.L.G. THERE’S A WAY” tee-shirts (pictured).

After the vote, Davies posted a blog in which he described his “emotional day” following a victory he said was “key for disabled rights across Wales and throughout the UK”.

He added: “We should all rejoice while remembering the fight is far from over as we need to ensure Welsh Labour listen to the will of their members.”

Davies has previously described his terror at the prospect of his cash-strapped local authority taking over full responsibility for providing his care package, having been told that without WILG his own care package would be reduced from 86.5 hours to just 31 hours a week.

He has described the campaign as a “life or death” fight.

He told Disability News Service yesterday (Wednesday) that the passing of the motion was “obviously the high point of our ever-growing campaign” but that it “does not mean that we have succeeded in securing WILG”.

He said: “We must continue with our campaign and ensure the Welsh government listen and act upon the wishes of their members.

“One thing is for sure, we won’t rest until we preserve and improve the Welsh Independent Living Grant.”

He thanked the cross-party and union support for his campaign – including the “wonderfully supportive” Clwyd constituency Labour party, which proposed the motion – and the other recipients of WILG.

He particularly praised members of Welsh Labour Grassroots – which represents the Momentum movement in Wales – who he said had “worked tirelessly to ensure independent living remains an option for those with high care and support needs”.

Davies is hoping that the Welsh government – which will have a new first minister in the autumn after Carwyn Jones announced that he would be standing down – will now reverse its decision to scrap WILG.

A spokeswoman for Welsh Labour said: “As with all motions passed at conference, this will now be considered by Welsh Labour’s policy process ahead of the next assembly elections.”

The Welsh government announced in 2016 that, after a two-year transition period, it would transfer all the £27 million-a-year provided by the UK government to support former ILF-users in Wales directly to councils.

It decided there would be no continuation of the interim WILG scheme it had been running as a stopgap since the Department for Work and Pensions closed ILF in June 2015, and would not set up a new Welsh ILF, even though such a scheme had been set up in Scotland.

All the £27 million-a-year funding is set to be transferred to Welsh local authorities this year, and they will be solely responsible for meeting the support needs of all former ILF-recipients by 31 March 2019.

The Welsh government’s new Social Services and Wellbeing Act is supposed to provide new rights for people to access a re-assessment of their support at any time, with local authorities under new legal duties to support independent living.

It believes that this is a more progressive system than the one operating in England.

But Davies has said previously that the decision to transfer the £27 million to councils and close WILG meant the Welsh government had “sold disabled people down the river” and was “washing their hands of all responsibility for social care to former ILF recipients and transferring the pressure onto local authorities”.