Grassroots activists have challenged the government and mental health professionals over their failure to address widespread attacks on their rights.

Members of the Mental Health Resistance Network (MHRN) were outside a conference in central London on Tuesday to protest at the “deeply harmful” impact of mental health services on the wellbeing of people living with mental distress.

MHRN said that “profiteers” and “cost cutters” at the event – which was examining “next steps for mental health services” – would be discussing services “designed to benefit employers and neoliberal ideology over the wellbeing of people who live with mental distress”.

They want instead to see a “change in culture” in mental health services and an immediate end to the “conscious cruelty” of the work capability assessment.

Several MHRN activists also attended part of the event, organised by Westminster Health Forum, which is believed to have been attended mostly by mental health professionals and civil servants.

Denise McKenna, co-founder of MHRN, told delegates the conference was “a disgrace” and that they had “no right to make money out of people in mental distress”.

She reminded them that people were taking their own lives because they were having their benefits removed.

She said: “This is about people making money. You’re helping no-one but yourselves.”

She told Disability News Service later that the focus of the part of the event she had attended had been on the government’s agenda of pushing people with mental health conditions into work.

She said: “This abusive ideology is now being embedded into the type of treatment we are receiving.

“You go in to a mental health professional and they actually start bullying you to get a job.

“There was this most toxic piece of Tory ideology being spouted out [at the conference]. I am really not happy with psychiatrists talking about a work cure. That’s quackery.”

Members of MHRN handed over copies of their new document, We Demand… , to delegates, and have sent a copy to Claire Murdoch, NHS England’s national mental health director.

We Demand… makes 50 demands for reform, both of mental health services, and the social security system that service-users rely on.

The document includes calls for a public inquiry into the harm caused by psychiatric drugs and ECT; for the research and manufacture of drugs to be nationalised; for user-led mental health services; and for an inquiry into violence and abuse of patients in psychiatric wards and the community.

Among its demands on social security, it calls for universal credit to be “stopped and scrapped”; for an end to “degrading and stressful” benefit assessments; for the removal of all DWP work coaches from NHS settings; and for an end to “the lie that work can cure mental distress”.

They also want to see a public inquiry into deaths linked to the benefits system, with legal action taken against any MP or peer implicated in these deaths.

And they want to see legal action taken against any health professionals and disability benefits assessors who “cause harm by colluding with the removal of social security”.

An MHRN spokesperson said: “Action to hold the government to account is now long overdue as its reckless and contemptuous treatment of mental health service users and disabled people, removing vital support services and holding the threat of cutting our benefits constantly over our heads, is causing great harm and driving some to suicide.”

MHRN has demanded a full response to its demands from NHS England within two months, and wants an invitation to speak at all such future events.

In an open letter to Murdoch, MHRN demanded “a change in the culture of mental health provision, with the focus on long-term user led support and a stop to the ‘work-outcome or be sanctioned’ approach which is set to drive benefits provision for mental health service users” and amounts to a “dangerous level of pressure and coercion”.

The letter added: “We will also be demanding an end to the lie that mental distress can be cured by the simple act of trying hard enough.

“This is another way of saying, ‘pull yourself together’. It is ill informed, lazy, accusatory, cruel and counter-productive.” 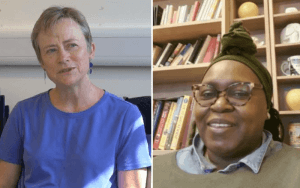