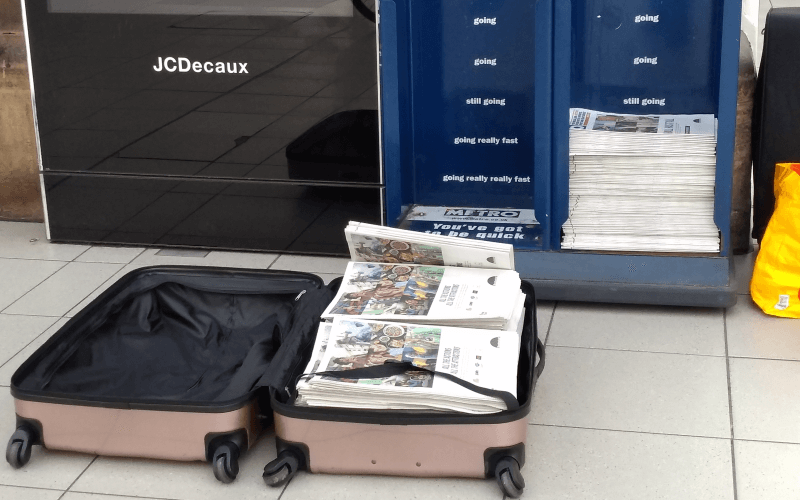 Disabled activists across the country have removed thousands of copies of a national newspaper from their public distribution points after it began publishing a series of advertising features that will air-brush concerns about universal credit.

Members of Sheffield Disabled People Against Cuts (DPAC) are now promising to “step up the campaign” against the Metro free newspaper.

They have even offered a prize of a DPAC tee-shirt for the most creative way in which an activist can recycle or reuse a copy of the Metro, and so prevent the Department for Work and Pensions (DWP) advertising features being read.

Photographs show all the copies of the Metro at Sheffield train station being removed in a suitcase (pictured) – while a similar action took place in Ipswich – with Sheffield DPAC encouraging people to “get to your local Metro newspaper stands and help us by removing the Metros from the shelves”.

It adds: “Re-use them, recycle them, just don’t leave these LIES on the stands.”

And it warns: “This nonsense is going to be going on for nine weeks from this week and each week we will be stepping up this campaign […] we are absolutely not giving up […] if anything it just makes us angrier and more determined.”

Sheffield DPAC has also warned all the companies advertising in Metro that thousands of potential readers would not see the adverts they had paid for because DPAC activists “have removed thousands of copies of the newspaper” from stations, buses, trains and trams around the UK.

A spokesperson for Metro – which is run by the company that owns the Daily Mail – said: “Metro is a non-partisan newspaper, which carries advertisements for a range of clients, including government departments and unions.

“Metro takes advertising standards seriously and requires our advertisers to comply with all laws and the Advertising Standards Authority (ASA) code.

“The Department for Work and Pensions has informed us that the advertising was reviewed by the ASA’s copy advice team prior to publication.

“Metro is happy with this process.”

The protests come as DPAC is set to release a report detailing “the reality of universal credit”, with links to hundreds of newspaper stories from across the UK that have reported on the real damage caused by UC, and were published over a period of just 16 weeks between 20 January and 12 May 2019.

Meanwhile, Disability News Service (DNS) has confirmed that DWP breached Civil Service guidelines when it decided to launch the nine-week series of “unethical and misleading” adverts without including a government logo.

The Government Communication Service’s “branding guidelines” make it clear that “all government campaigns and comms should be government branded to ensure transparency and accountability”.

The guidelines also say: “It is important that the public is easily able to recognise the work of government, departments, their agencies and Arms Length Bodies.”

But the first of DWP’s universal credit advertorials published by the Metro newspaper last week included no government logos.

The second advertisement feature, which appeared yesterday (Wednesday) in the Metro, also failed to include a government logo.

The only reference to the source of the advertorials is a line – which is even less obvious on the Metro website – that states: “ADVERTISEMENT FEATURE FROM THE DEPARTMENT FOR WORK AND PENSIONS.”

A leaked DWP memo, signed by three senior servants – including Neil Couling, director general of the universal credit programme – proves the failure to include a government logo on the advertorials was intentional.

The memo admitted that the nine-week series of advertorials in the Metro were designed to be misleading.

It said: “The features won’t look or feel like DWP or UC – you won’t see our branding, and this is deliberate.”

The Metro advertorials are part of a nationwide DWP campaign to “myth-bust the common inaccuracies reported on UC”.

They will cost DWP hundreds of thousands of pounds, and have already led to complaints being lodged with ASA.

A spokesperson for the Cabinet Office, which is responsible for overseeing the guidelines, said they were “at the end of the day guidelines and this is a DWP campaign”.

She said the Cabinet Office was “content that the materials clearly stated that it was an advertising feature from DWP”.

She pointed to information provided to DNS last week by DWP, which stated that advertising features “are generally developed to give the same look and feel as the publication they are being placed in – while clearly stating who produced the material”.

DWP also said last week that its first advertorial “clearly stated that it was an advertising feature from the Department for Work and Pensions”.

But Natasha Hirst, chair of the equalities council of the National Union of Journalists (NUJ), who also has the disabled members’ seat on NUJ’s national executive council, said: “There appears to be a breach of the government’s own guidelines on communications, as raised by the NUJ last week.

“The advertorials are shockingly poor practice but are not the only problem.

“We are concerned that the integrity of journalism could be called into question by biased and uncritical features in publications.

“It is vital that journalism remains independent of political interference.

“The erosion of trust created by orchestrated visits to jobcentres and government-placed advertorials that dismiss people’s harsh experiences of universal credit is something we must all fight.

“It is incredibly poor judgement for the Cabinet Office to show no willingness to criticise misleading communications from the DWP.”

Linda Burnip, a member of DPAC’s national steering group, said the “disgraceful and fabricated” Metro ad campaign “shows just how much UC is a total failure” and how concerned DWP is about its roll out and consequences.

She added: “However, even for Rudd and her DWP minions this is beyond contempt.”