You are here: Home / Activism and Campaigning / Activists bring ‘no more benefit deaths’ message to Westminster 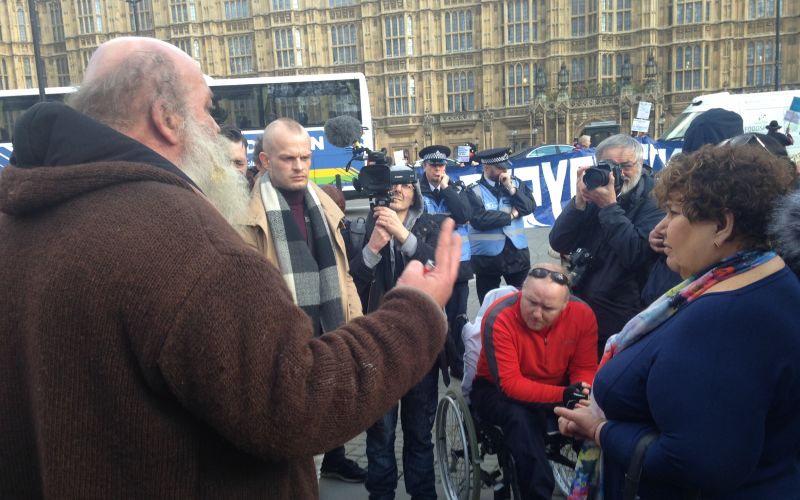 Disabled activists have explained why they took to the streets around parliament to protest at the government’s latest cuts to disability benefits.

The protest, organised by Disabled People Against Cuts (DPAC) and the Mental Health Resistance Network (MHRN), brought traffic to a standstill outside the Houses of Parliament on Tuesday, a day before the spring budget.

It was sparked by fresh cuts to personal independence payment (PIP) that were announced last month by work and pensions secretary Damian Green, following two tribunal rulings, and which will particularly impact on people with mental health conditions.

A Department for Work and Pensions (DWP) equality impact assessment found that an estimated 164,000 claimants will either lose all of their eligibility for the PIP mobility component or see it reduced, as a result of the cuts.

Another 1,500 disabled people who need support to take medication and monitor a health condition will either lose all of their PIP daily living payment or see it cut.

During the protest, activists – and Labour’s new shadow minister for disabled people, Marie Rimmer – posed for pictures in front of parliament with a “#ToryCutsKill” banner.

Scores of disabled people then marched around Parliament Square chanting “no more deaths from benefit cuts”, before staging a sit-in roadblock.

Many of those who joined Tuesday’s action were protesting at the cumulative impact of years of cuts to disability benefits and other support, and its often fatal impact on disabled people.

The latest cuts came only three months after the UN’s committee on the rights of persons with disabilities found the UK government’s social security reforms had caused “grave or systematic violations” of disabled people’s rights.

Paula Peters, from DPAC and MHRN, said the PIP cuts were “an ideologically-designed policy designed to remove support from us” and that the government had “blood on their hands” and “need to be put in the dock for the deaths of disabled people”.

She told protesters: “Raise your voices in anger. This has got to stop.”

MHRN activist Roy Bard said the latest cuts showed the government had “no respect for the United Nations and no respect for disabled people”, and warned that they would lead to more “distressed and traumatised people… on the streets of our cities and towns”.

He disputed the government’s claim that people with mental health conditions were more likely to receive the support they needed under PIP than under disability living allowance (DLA), the benefit it is replacing for working-age claimants.

He said: “That’s not our experience. Our experience is that people who had been on DLA with mental health issues for a long time suddenly find themselves on zero points when they come to their first PIP assessment.

“The people who are the most isolated, the most vulnerable, are the ones who are losing out at the moment.”

Denise McKenna, MHRN’s co-founder, told Disability News Service: “People are living very close to the edge at the moment and they can’t afford any more cuts.

“The government are getting rid of the welfare state and they don’t care who lives or dies.

“In the context of a huge assault that has been going on for several years now, these are particularly nasty. It’s particularly aimed at people with mental health problems.”

Another disabled protester, Jamie McCormack, said: “If you are going to have a prime minister talking about equality, talking abour parity of esteem [between mental and physical health], then you had better match it up with actions.”

He said he had wanted to attend the protest on behalf of friends with mental health problems who could not be there, and to be “the voice of the voiceless”.

Disabled campaigner Faisal Yusuf said: “Are they politicians or are they barbers? Benefits are not a person’s hair that they keep cutting.

“They say they are going to support people with learning disabilities but then they cut the benefit.

“My message to the government is: ‘Stop with the cuts.’ To them it might be some sort of benefit, but to people with learning disabilities it is their lives.”

Richie Boakye said he and his friends were there to “speak up for ourselves”.

He said: “The government taking money from disabled people is wrong. They shouldn’t cut our money because we have a disability. Our money is important.”

Martin Doyle added: “I am only here because I don’t like the way they are cutting all the benefits. I think it’s disgraceful.

“Like Richie, I think we are all entitled to our money, full stop.”

He added: “I am worried about what is going to happen in the future. If they are going to cut our benefits, what else are they going to cut? Our self-respect?”

John Wood, who receives disability living allowance, said he was already struggling with his bills, even though he had not yet been reassessed for PIP.

He said the latest cuts were “disgraceful”.

Victoria Lopez said she had wanted to attend the protest because of the disabled people who had died as a result of the government’s welfare reforms.

She said: “One person is too many, and that is what we are saying, and they are not being held accountable. People should not be dying. How is that right?

“My hope is that we are listened to.”

She said she hoped the government would think again on the imminent cuts of nearly £30 a week for new claimants placed in the work-related activity group (WRAG) of employment and support allowance, and that it would scrap the work capability assessment.

She said she had wanted to attend the protest even though she knew that it meant she would be “paralysed” the next day because of her impairment.

Another disabled protester, Rona Topaz, said she feared that the government would eventually “try to abolish PIP altogether”.

She said that although the current cuts did not affect her personally, she was “here to show solidarity with people who are affected by these cuts.

“I believe they are ideological, they are unnecessary, and they are specifically meant to demoralise the weakest and most vulnerable claimants of PIP.”

Ariane Sacco, from the disabled women’s organisation WinVisible, said that women with mental health problems who were part of the network were “alarmed” at the latest PIP cuts.

Rimmer (pictured, talking to Bard), Labour’s new shadow minister for disabled people, said the PIP changes had been “sneaked through”, and that while the government had promised “parity of esteem” for mental health service-users, the new cut to PIP “flies in the face of parity of esteem”.

She added: “When [the government] have a chance to do something about parity of esteem between mental health and physical health, what do they do? They throw it away.”

She said: “They are dismantling every support service we have. To attack disabled people in this manner is absolutely unforgiveable.”

Rimmer, a disabled person herself, told DNS that the latest cuts would “shove more and more people into poverty”.

She added: “It’s their means of getting out and about. They are going to be sanctioned into their own homes. It really is inexcusable.

“The key message is they should restore it, treat disabled people as human beings and help them to live a life and be included in society.”

She said the government was “absolutely not” doing that at the moment, but instead was “throwing them by the wayside”.

Rimmer pointed out that the UK had been the first to be criticised through a UN inquiry for “grave or systematic violations” of the disability convention.

Jonathan Bartley, co-leader of the Green party, who was also at the protest, accused the government of “moving the goalposts when it suits them” on PIP eligibility, and “over-turning the will of the courts”.

He said the latest cuts were “continuing to imprison more disabled people within their homes”.

And he said they would “segregate” and “remove disabled people from the public consciousness” and make it even harder for them to protest about the cuts they were facing.