You are here: Home / Arts, Culture and Sport / Activists protest outside premiere of ‘disability snuff movie’ 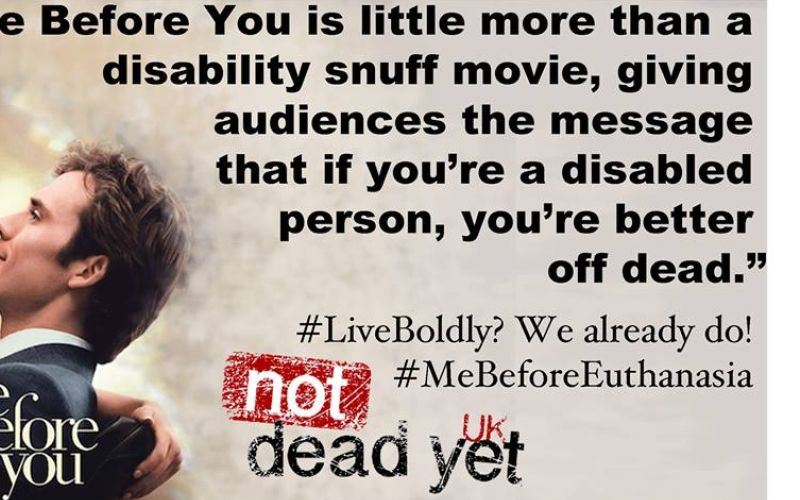 Appalled activists protested outside a London premiere last night after describing the film as a “disability snuff movie” that suggests disabled people are better off dead.

The protest outside the Curzon Mayfair cinema in London’s West End was coordinated by the disabled people’s anti-euthanasia campaign group Not Dead Yet UK (NDY UK) in response to the release of the film Me Before You.

Disabled campaigners have criticised the film-makers responsible for the “emotional and epic love story”, because they say it suggests yet again that disabled people are a burden on society and should opt for euthanasia.

Me Before You caused a storm of protest from disabled people on social media this week, both in the UK and the US, over both its attitude to disability and its choice of a non-disabled actor, Sam Claflin, to play the lead role of a banker left quadriplegic after an accident.

Claflin’s character apparently travels to the Dignitas clinic in Switzerland and has an assisted suicide because he doesn’t want to live as a disabled person and does not want to be a burden on the woman he loves.

But disabled actor Liz Carr, a leading member of NDY UK, who took part in the protest, said: “This film is offensive to disabled people, the vast majority of whom want to live – not die.

“Our lives and those of our loved ones are not mired in tragedy, as depicted in this film.”

Critics of the film include the disabled peer Baroness [Jane] Campbell, co-founder of NDY UK, who sent a tweet to author Jojo Moyes, who wrote the best-selling book on which it was based, asking: “Are you taking on board disabled people’s grave concerns about the film?”

The film is being promoted with the hashtag #LiveBoldly, and Baroness Campbell responded on Twitter: “#MeBeforeEuthanasia #LiveBoldly? We already do! #MeBeforeYou Enough film, drama and docu makers. When are you going to reflect our real lives?”

Some campaigners believe that Claflin was forced to abandon a live question and answer session on Twitter this week after being bombarded with critical tweets from disabled people, most of which he ignored.

One disabled Twitter user asked him: “Why should I have to sit here tweeting about how us disabled people WANT TO LIVE? This disgusts me. #AskSam #LiveBoldly.”

Another asked Claflin: “How do you feel about profiting off the message that death is better than disability? #AskSam #LiveBoldly.”

Jo Verrent, the disabled senior producer with the Unlimited disability arts programme, asked Claflin on Twitter: “Did you consider how damaging the storyline was to disabled people who want to #LiveBoldly and not be killed off? #AskSam @mebeforeyou.”

Another campaigner, tweeting at @PilgrimKitty, asked Claflin: “Is being dependent on others really so bad that the only viable solution is death? #AskSam #LiveBoldly.”

Not Dead Yet UK took the lead in the social media campaign in the UK (pictured), with a series of tweets criticising the film.

It tweeted: “#MeBeforeYouPremiere Where message is disabled people are burdens and should opt for #Euthanasia #LiveBoldy.”

Disabled model Chelsey Jay called on the government to “publicly condemn” the film, and for the media “to stop the suppression of disabled actors and other creatives”.

US Paralympic athlete Lacey Henderson was another who tweeted her anger, describing it as a “tragic and disgusting portrayal of disability”.

The disabled journalist and presenter Mik Scarlet said on Twitter that the film “reinforces stereotypes that led to a suicide attempt when I became #spinallyinjured. Think on that.”

The storm over the film came just days after Scarlet’s union, Equity, saw its motion calling for “greater representation and more accurate portrayal” of disabled people on stage and screen passed unanimously by the TUC Disabled Workers Conference in London.

Lauren West, a member of the Trailblazers network of young disabled campaigners, also spoke out.

She said: “Our members were deeply troubled by the trailer and premise of the Me Before You film.

“It is utterly disappointing to see, again, a non-disabled actor playing a disabled role.

“Then, to have the disabled character choose suicide as an outcome is an alarming and misleading representation of life for many people with disabilities.”

She said that young disabled people were “fed-up of being excluded from mainstream media”.

She added: “When a disability storyline finally happens, it is misleading, inaccurate and sends out the wrong message.

“Disabled people are crying out for fair representation, and accurate portrayals. Me Before You does nothing towards achieving this.”

So far, neither Claflin nor Moyes, nor anyone from the team behind the film, have responded to a request from Disability News Service to discuss the concerns.