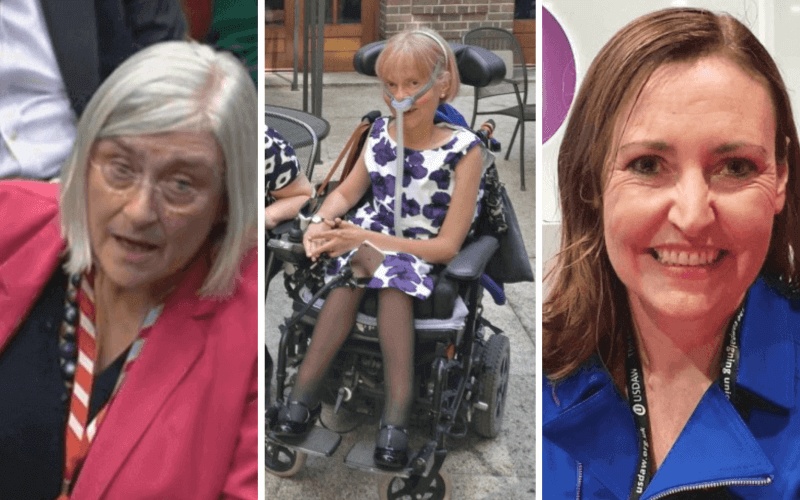 There is growing alarm over the government’s “appalling” and “deeply concerning” failure to show that disabled people who need electricity to run lifesaving medical equipment in their homes will be protected if there are power blackouts this winter.

It is now the fourth consecutive week that Disability News Service (DNS) has attempted – unsuccessfully – to obtain evidence that plans to protect disabled people will be in place in the event of three-hour blackouts this winter.

The power-cuts are said to be unlikely but possible.

Despite the threat, DNS has been told that no national guidance or support relating to how to protect disabled people who use such equipment at home has been sent to the NHS in England by the Department of Health and Social Care (DHSC).

This week, DHSC again passed on all queries about the government’s planning – even questions about its failure to provide guidance to the NHS – to the Department for Business, Energy and Industrial Strategy (BEIS).

BEIS has refused to say anything about the government’s preparations, having previously only expressed confidence in its plans to “protect households and businesses, including vulnerable households”.

It had also refused by noon today (Thursday) to comment on the lack of guidance or support for the NHS.

The disabled crossbench peer Baroness [Jane] Campbell told DNS yesterday that she was alarmed at the apparent failure to plan for the impact of possible winter power blackouts on people who rely on medical equipment at home.

She said: “It does concern me greatly both on a personal level, as someone who depends on electricity to literally survive, and on behalf of my fellow disabled people in similar circumstances.”

She needs electricity throughout the night to run two ventilators, two feeding machines, a ripple mattress (to prevent pressure sores) and her wheelchair charger.

She said: “All of these devices are either life-saving or essential to prevent my health from deteriorating.

“I also require a heated blanket if the temperatures go below five degrees through the night to prevent hypothermia.”

She has investigated buying a back-up generator but the price of one powerful enough for all the equipment she needs to run would cost thousands of pounds, plus the cost of installation.

This week, DNS contacted a sample of local resilience forums (LRFs), the multi-agency networks set up across England and Wales to ensure an area is prepared for emergencies.

Kent Resilience Forum was unable to provide any information about the plans it might have drawn up to protect disabled people who use lifesaving equipment at home.

Instead, it provided general information about their need to sign up to their electricity provider’s Priority Services Register, and promised to “manage appropriate caring interventions to support individuals and communities who may become vulnerable” and carry out “appropriately targeted measures” to support public health and health providers.

It also said it would consider “any appropriate evacuation and shelter interventions”.

Monmouthshire County Council, in Wales, was also unable to point to any plans Gwent LRF has drawn up, although it said that measures the forum could take to support “any known vulnerable people” could include “targeted house visits” and the use of “rest centres or transporting people to specific locations dependent on their need and nature of the emergency”.

Dorset County Council, a key member of Dorset’s LRF, was unable to say what plans were in place, and suggested DNS contact the NHS and the government.

But it said it was working with the forum, which would ensure “all residents have access to the right information for their individual circumstances” and was starting a project that will “encourage our residents to start looking at how resilience needs to begin at home”.

A council spokesperson said: “The government is the lead agency for any response and the LRF will take direction from their advice and guidance.”

Derbyshire LRF also failed to point to any specific plans, although it insisted that it “works closely with partner organisations across the county to ensure arrangements are in place to support residents, including the most vulnerable, in an emergency”.

It said: “If power outages do occur over the coming months the plans we have in place will ensure a co-ordinated response to ensure people who need help and assistance receive it.”

But it declined to give any details of any plans it might have for those who rely on lifesaving equipment in their own homes.

The energy regulator Ofgem repeatedly promised to provide information, and insisted it had “a great deal to say”.

But 10 days after it was first approached by DNS, Ofgem was unable to provide any firm details about the action it was taking, other than working with distribution network operators (DNOs*) – which are responsible for ensuring customers dependent on medical equipment are protected during blackouts – and electricity providers, scrutinising DNOs’ emergency planning, and assessing the support DNOs can offer those in the most vulnerable situations and how they liaise with LRFs.

A spokesperson eventually said this morning: “We are looking into various power disruption scenarios this winter and the potential impact on vulnerable customers, including those with vital medical equipment.

“We are working with the energy industry and other stakeholders to ensure that the needs of vulnerable and medically dependent customers are factored into contingency planning and resilience preparedness.”

The disabled Liberal Democrat peer Baroness [Sal] Brinton, who has been raising concerns about the lack of planning in the House of Lords, said she had now been told that a Cabinet Office minister was coordinating the government’s preparations, despite previously being told BEIS was in charge.

She said: “It’s evident to me that everyone in government and health thinks this is someone else’s responsibility, which is exactly why nothing is happening.

“When ministers have answered my questions in the Lords over the last month, they demonstrated repeatedly the lack of preparation, and worse, confusion, about who has responsibility and what arrangements need to be in place.

“They just don’t understand that these arrangements are needed for life-supporting equipment to work. It’s appalling.”

She said that people “who rely on lifesaving medical equipment and need extra heating should not have to worry about this Tory government’s utter failure to plan correctly.

“The government should have contingency plans to ensure potential blackouts do not impact them.

“Ministers must urgently act, so people have some confidence this winter – failure to act is a dereliction of duty.”

Charities that represent people with long-term conditions told DNS this week that they were also concerned about the lack of information coming from the government and other organisations.

Muscular Dystrophy UK (MD UK) said blackouts could be life-threatening for some people with muscular dystrophy, and that it had heard nothing from the government on whether it had any plans in place.

Rob Burley, MD UK’s director of care, campaigns and support, said: “Many people with muscle-wasting conditions rely on equipment that requires electricity – from powered wheelchairs to life-saving equipment such as ventilators – so the possibility of power cuts will be a cause of great anxiety and concern.

“In some cases, power cuts could even be life-threatening.

“We are already hearing from people who are buying back-up power sources for equipment in case of blackouts; one woman we spoke to has bought back-up power for her bi-pap machine [which helps with breathing], for £400.

“At a time when the rising cost of living is hitting disabled people especially hard, it’s an expense many will struggle to afford.

“We need to see clear plans from the government that will reassure disabled people that power cuts will not leave them at risk or even further out of pocket.”

The MND Association said the lack of clarity from the government was “very much a concern”.

Kidney Care UK has also told DNS of its concern at the lack of planning by the government, NHS and the energy industry.

Fiona Loud, policy director at Kidney Care UK, said: “Thousands of people undertake their life-saving dialysis treatment at home because this works for them and is medically the best treatment option for them.

“Interruption to the power supply would put the treatment itself at risk.

“We are concerned that the needs of kidney patients are not being fully understood or considered in any advance planning that is being undertaken by utility companies, the NHS, the National Grid, and the government.

“We need to know what the contingency plans are for these individuals so that they can be assured that their health and well-being, as well as their life-saving treatment, will not be disrupted by unplanned and potentially dangerous power outages.”

Kidney Care UK is advising all kidney patients to ensured they are signed up to their energy provider’s Priority Services Register, but its latest figures suggest that only a third of its supporters have done so.

Not one of them has been able to offer any evidence that plans are in place to protect people with long-term health conditions who use life-saving equipment in their own homes in the event of widespread blackouts this winter.

Cheshire and Mersey ICB would only say this week that “providers of such equipment used by patients in their homes will manage such situations as part of their business continuity plans”, that NHS Cheshire and Mersey would “work closely with providers to ensure the safety of their patients”, and that “in the event of scheduled power cuts, we will work with all relevant providers and partners to ensure patients are kept safe in their own homes”.

A spokesperson for the NHS in South West London said that anyone receiving funded healthcare should “talk to their healthcare provider or local authority community care team directly for support and advice”.

So far, the only clear advice for disabled people who rely on equipment such as ventilators, home dialysis machines, or fridges to keep medication cold, is that they should sign up to their energy provider’s Priority Services Register.

They may then be given advance notice of a power cut, could have priority support for emergency cooking and heating facilities if their electricity is cut off, and may be signposted to charities such as Red Cross for “hot meals and drinks”.

They should also probably “seek advice from their local health service provider”.