You are here: Home / Transport / Anger after bus giant ‘tries to weasel out’ of Supreme Court discrimination ruling 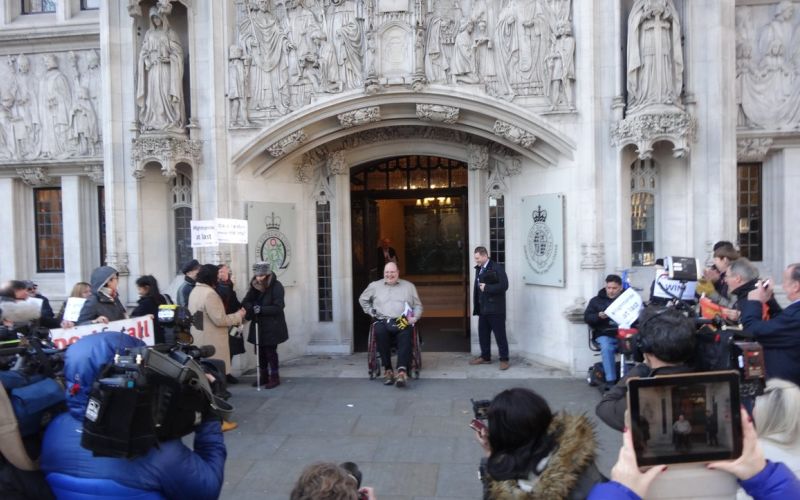 The bus company at the centre of a ground-breaking Supreme Court case has been accused of trying to “weasel out” of the unanimous conclusion that its policies unlawfully discriminated against wheelchair-users.

The ruling was the culmination of a five-year legal battle by disabled activist Doug Paulley, from Wetherby, near Leeds, who took the case against First Bus – part of the public transport giant FirstGroup – following an incident in February 2012.

Paulley had been planning to travel to Leeds to see his parents, but was prevented from entering the bus because the driver refused to insist that a mother with a sleeping child in a pushchair should move from the wheelchair space.

The county court originally ruled that wheelchair-users should have priority in the use of dedicated wheelchair spaces, and that the “first come, first served” policy of First Bus breached the Equality Act.

The court of appeal then over-turned that ruling and said instead that a bus driver needed only to request – and not demand – that a non-disabled passenger vacate the space if it was needed by a wheelchair-user.

Yesterday, in the first case of disability discrimination in service provision to be heard by the country’s highest court, the seven Supreme Court justices unanimously allowed Paulley’s appeal, although they did not grant him damages.

They ruled that FirstGroup’s policy that required a driver simply to request a non-wheelchair user to vacate the space, without taking any further steps, was unjustified.

They ruled instead that if a bus driver who had made such a request concluded that the refusal to move was unreasonable, he or she should consider further steps to pressurise them to vacate the space, but short of throwing them off the bus.

Although the Supreme Court justices did not explicitly state in their judgments that First Bus had discriminated against Paulley, the case centred on whether the company’s policy was discriminatory under the Equality Act.

And a spokesman for the Supreme Court said that, even though he could not comment any further than the judgment, “it is clear that the court has decided that FirstGroup didn’t meet their obligations under the Equality Act 2010”.

FirstGroup claimed that it welcomed the ruling, which it said had provided “welcome clarity for bus operators, our drivers and our customers”.

But it added: “We recognise how important it is that bus services are accessible for all customers… we are therefore also pleased that the Supreme Court found that we did not discriminate against Mr Paulley.”

And he said the Supreme Court had “made no finding as to whether Mr Paulley had in fact been disadvantaged by our policy of requesting other passengers to move from the wheelchair space”.

Paulley said he was angry with FirstGroup’s response, and added: “I think they are trying to argue that black is white.

“It’s a pathetic policy of trying to weasel out of what is clearly the Supreme Court’s intent which was to make it clear that First Bus could and should have done more and that they are culpable for not doing so.”

He had written in his blog: “This case was specifically about whether or not FirstGroup discriminated against me, by failing to make sufficient adjustment to try to ensure that the wheelchair space was available to me, when I needed to travel that day in February 2012.

“It ruled on whether their policies and practices are discriminatory. All seven judges found in my favour.

“So how can FirstGroup, in all conscience, claim that the Supreme Court decided that FirstGroup didn’t discriminate against me?”

Alan Benson, chair of the user-led accessible transport charity Transport for All – which has supported Paulley through his case – said FirstGroup was “wrong” in its refusal to accept that it had been found to have discriminated.

He said: “The appeal was upheld. They didn’t do what they should have done. Their press office, their lawyers, can frame it in whatever language they like.”

Picture: Paulley in front of the media and watched by supporters from Transport for All, outside the Supreme Court yesterday