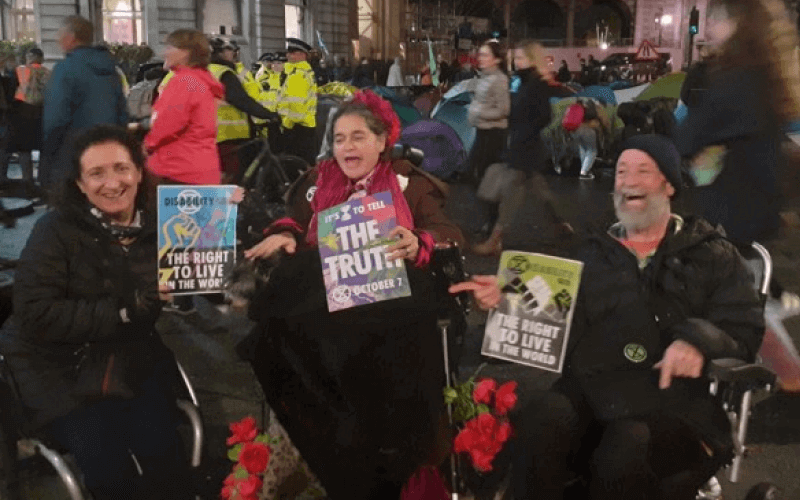 A police force has been accused of discrimination and “abusive” behaviour after confiscating ramps, wheelchairs and even accessible toilets that were intended to make this week’s Extinction Rebellion climate change protests in London more inclusive – and safer – for disabled activists.

Members of the Disabled Rebels group had spent months working with the organisers of Extinction Rebellion (XR) to ensure that the protests taking place this week and next would be accessible and inclusive, as reported last week by Disability News Service.

But the Metropolitan police have sabotaged those preparations by impounding two mobile accessible toilets that had been rented by XR, and arresting two members of staff working for the charity that was providing the equipment.

That police action on Monday near St James’s Park, Westminster, followed a police raid on a building in south London on Saturday, which led to eight arrests and the seizure of independent living aids and other equipment being stored by XR.

Organisers said later that the equipment seized included wheelchairs, ramps, noise-cancelling headphones for autistic protesters, camp beds for those unable to sleep on the floor, and solar-powered charging equipment for wheelchairs and scooters.

As a result of the seizure of this equipment and the accessible toilets two days later, plans for a disability hub in St James’s Park had to be abandoned.

The hub was to have provided a central place for disabled people to gather, rest, receive information, take part in training, provide peer support, and begin to build a movement of disabled people on climate change.

There was further anger over Monday’s police’s actions, after it emerged that – following six hours of negotiations with XR – a senior officer had apparently given permission for the two converted vans, each containing an accessible toilet, a changing bench, shower facilities and a ceiling hoist, to be driven into the occupied protest area.

Two members of staff working for the charity that hires out the vans at subsidised rates – Mobiloo, founded by retired Irish Paralympian James Brown – were then arrested, along with two XR protesters, even though they had been given permission to bring the vans into the protest area and had apparently been following instructions from a police officer on where to park them.

One of the two Mobiloo staff members later had to be taken from a police station to hospital after an angina attack, believed to have been caused by the stress of being arrested and held in custody.

All four are believed to have been arrested for conspiracy to cause a public nuisance and obstructing a public highway.

Sandra Daniels, one of the activists behind XR Disabled Rebels, said the police actions had caused health and safety problems for disabled protesters, and were likely to lead to an official complaint to the force, and possibly legal action.

“We have the right as disabled people to protest. In effect they have stopped that right.”

She said Disabled Rebels had challenged XR to make the fortnight of protests accessible and inclusive, and XR had been “supportive”, but because of the police action that inclusion had not been possible.

She said: “Once again I feel we have been excluded as disabled people, and we have a right to protest.”

Another Disabled Rebel, Nicki, said the police decision to impound the Mobiloos “could have huge implications” for disabled people’s health, wellbeing and dignity.

She said: “It has meant that some people have had to stay away; their right to peaceful protest has been taken away by this decision.

“This has been a huge blow to disabled people wanting to participate, coming just days after so much access equipment was seized from the XR warehouse on Saturday.

“This equipment was crucial for the safety and welfare of sick and disabled people.

“One of XR’s principles states that we welcome everybody and every part of everybody.

“We really hoped to achieve this and XR had been so positive about embracing radical inclusion of disabled activists.”

Alex Howell, Mobiloo’s operations director, has been told that his charity’s two drivers waited for six hours while XR’s liaison team negotiated permission to bring in the two vans.

They were then given permission to do so by a senior officer, and the vans were driven through the police cordon by two XR volunteers, with the Mobiloo staff – who were not part of the protest – in the cabs.

All four of them were then arrested, and taken to Acton police station, with the two vans impounded.

Howell said: “My concern is for my staff, first and foremost. Them being put in a situation where they were following police instructions and were arrested is quite concerning.

“It does make us reticent to be involved in protests in the future.”

He said Mobiloo had not heard from the police about how or when they could retrieve their vans, which had been booked by XR for the two weeks Extinction Rebellion is expected to last.

Howell said: “Taking part in a protest is something someone should be able to do. If someone is disabled, they need accessible toilet facilities to be able to do that.

“We were just providing a service as we would do to anyone.”

Extinction Rebellion said today (Thursday) that it was keeping a record of “abusive police behaviour”, following the forceful confiscation of “shelter, food, water and anything that might allow disabled people to conveniently participate”.

It has called for witness accounts of such behaviour to be emailed to: [email protected].

A Met police spokesperson said all those arrested in south London had been released under investigation, while the property had been searched using powers under section 32 of the Police and Criminal Evidence Act 1984.

He said: “Officers seized a large amount of equipment at the address. The property will be retained while the investigation is ongoing.”

He added: “It is the police’s role to provide a lawful and proportionate policing response to any planned protest, balancing the community impact with the right to protest.

“Officers have powers to seize any equipment which they believe will facilitate unlawful protest.

“This forms part of our robust, proportionate policing plan which we continue to keep under review.

“If protestors break the law, officers will look to arrest those people. Furthermore, those people can expect to be charged, prosecuted, and receive a criminal record.”

The force had not commented on the St James’s Park negotiations and arrests by noon today (Thursday). 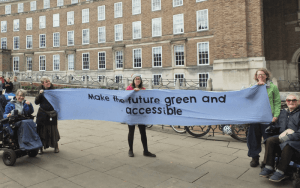 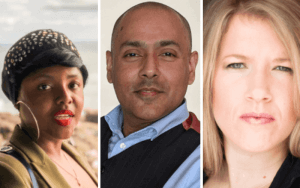