You are here: Home / Arts, Culture and Sport / ‘Assisted Suicide: The Musical’ gets Unlimited seal of approval 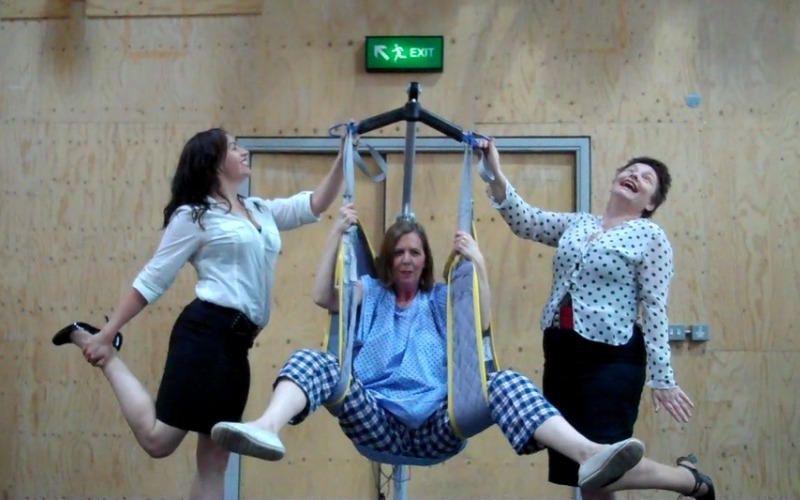 A leading disabled artist and activist is hoping that securing funding to develop a musical about assisted suicide from a prestigious disability arts programme might help “tip the balance” in the continuing campaign to oppose legalisation.

Liz Carr is one of nine disabled artists who will receive a total of more than £500, 000 in funding – and mentoring support – through the latest round of the Unlimited arts commissioning programme.

She has secured funding to develop and produce Assisted Suicide: The Musical, as writer – and, despite what she says is her lack of singing talent – possibly also as a performer.

Carr has been working on the idea – including the “image of a chorus line of people in hospital gowns and hoists singing and being twirled around in a huge choreographed extravaganza” – for about four years.

She told Disability News Service (DNS): “As someone opposed to the legalisation of assisted suicide, for a long time, I’ve wanted to use humour and music to shine a light on some of the complexities of this topic and to present an antidote to the usual view that ‘surely it’s a good thing?’

“When I was doing a lot of stand-up comedy, I saw how those comedians who used music in their acts could get away with saying practically anything controversial or rude.

“It made me realise that maybe that was the way to put across some difficult issues and ideas – through music.”

Her – “a little unrealistic” – dream is that her work could compare with The Book of Mormon, the huge hit musical by the creators of South Park, while at times she imagines a comparison with ‘Springtime for Hitler’ from the film The Producers, or something “less camp and more overtly political”, like the water privatisation musical Urinetown.

Carr, a prominent member of the anti-assisted suicide campaign group Not Dead Yet UK, has worked on the idea in the past with fellow disabled artists in the Big Lounge Collective and the “very talented” disabled writer Alex Bulmer, but admits that previously she was “a little scared that either I couldn’t do this subject justice or that I’d be massively criticised for it”.

She is hoping that her musical will be the first where “the opposition to assisted suicide wins out”, instead of a film or play about someone ill or disabled “who wants to die and whilst one lone voice tries to stop them, everyone else practically sees it as inevitable that they’d want to end their life and thus helps them”.

She said: “I’m fed up about the lack of nuance, lack of discussion, lack of balance, whether it’s in the media or through art.”

But she added: “Anything that is coming from a position opposed to assisted suicide will start to tip the balance but it definitely won’t redress it.

“As an artist and an activist, though, I get so frustrated at the inequality in debate and the fact that many disabled people’s concerns and opposition to the subject is just overlooked and silenced.

“This piece won’t change the world but I think it’s important that it gets made, gets out there, entertains and prompts debate.”

The other commissions announced by Unlimited this week include a 48-hour installation by Noëmi Lakmaier, in which she will attempt to lift her body off the ground through 20,000 helium balloons; an outdoor public performance by Aaron Williamson, in which he will carry out an “absurdly elaborate live reinterpretation of mundane YouTube ‘how-to’ videos”; and Bekki Perriman’s The Doorways Project, a sound installation that explores homeless culture through personal stories, inspired by her own experience of life on the streets.

Jo Verrent, senior producer with Unlimited, said the latest round of work would be “astonishing”, while the selection process had been “extraordinarily difficult”, with 162 applications.

She said: “The commissions are diverse in every way possible – art form, ambition, take on the world – just showing that disabled artists and disability-led companies truly can’t be categorised into just one box.”

Unlimited is being funded by Arts Council England, Creative Scotland, Spirit of 2012 and Arts Council of Wales, and delivered by the disabled-led Shape Arts and Artsadmin.

The nine commissions [click here for a subtitled version of the launch and an audio-described version] were chosen by a panel of 11, including several high-profile disabled artists, and chaired by Ruth Gould, artistic director of DaDaFest.

But this week’s announcement was overshadowed by an angry intervention from the critically-acclaimed deaf artist David Bower.

Bower, formerly best-known for his role in the hit British film Four Weddings and a Funeral, but now just as well-known as artistic director of the music theatre company Signdance Collective, sent a furious email to Verrent after learning that his company’s application for funding for a piece called cartharge/cartegena, written by the award-winning Cuban-American playwright Caridad Svich, had not been successful.

In the email, which he signed “a very angry ostracised deaf actor and art director”, he said: “The Signdance Collective has a huge track record and is one of the leading pioneers in deaf and disability arts practice in the world.”

He said the decision to reject the application was “an attack on the integrity of [our] organisation” and was “completely unacceptable”.

He told DNS that he believed Signdance Collective had been “a victim of gossip and back-stabbing lasting for well over a decade… hence the reason why we find it difficult to get work in the UK”.

He added: “I have never felt excited about a piece of work that the company is working on as much as this one. I believe in my deepest heart that the work is full of potential as a world-class production.”

She said the company “never gets invited to participate in UK-led disability arts events, are ostracized, rejected, and left out” and had to “look to the mainstream to do our work, as there is no support from disability arts at all”.

Avila said she had been concerned for some time about the lack of cultural diversity within disability arts.

She said: “As a mixed race, disabled Caribbean woman, I have always felt under-represented and lonely in the sector.”

Gould said in a statement: “Selecting work is always hard – selecting work for Unlimited is even harder, as the demand for the programme is so high.

“We could have spent three or four times as much without a drop in quality, the standard was so high.

“I know that there are many disappointed artists and companies out there who didn’t get funding this time, but I – and the rest of the Unlimited panel and team – are confident that we have done everything we can to make the process as clear and clean as it can be.”