You are here: Home / Benefits and Poverty / Benefit assessors ‘must be held accountable’ for report failings, MPs hear 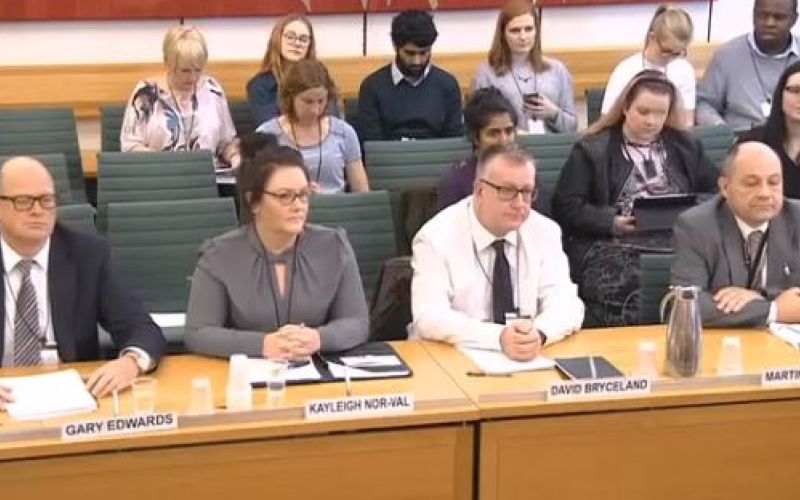 The healthcare professionals who carry out disability benefit assessments on behalf of the government should be held accountable for failing to report what they are told accurately, MPs have been told.

Members of the Commons work and pensions select committee were told repeatedly this week that assessors working for the outsourcing giants Atos, Capita and Maximus were producing reports that did not reflect what they had been told by the disabled people they were assessing.

They were hearing evidence from four welfare rights advisers (pictured) as part of their inquiry into the assessment processes for personal independence payment (PIP) and employment and support allowance (ESA).

Disability News Service (DNS) has been carrying out a year-long investigation into claims of dishonesty at the heart of the PIP assessment system, and revealed last month that complaints about the process rose by nearly 900 per cent last year.

But Atos and Capita – which carry out PIP assessments – and the Department for Work and Pensions (DWP) have repeatedly insisted that there is no dishonesty in the system.

David Bryceland, from Oxfordshire Mind, told the committee yesterday that he and his colleagues saw “many inaccuracies”, including major factual errors such as someone who lived in a ground-floor, one-bedroom flat being described in an assessment report as living in a three-bedroomed house.

Kayleigh Nor-Val, a benefits adviser for Citizens Advice in Merthyr Tydfil, told the committee that she and her colleagues came across “so many” inaccuracies in assessment reports.

Martin Richards, a disability benefits adviser for the charity Involve Northwest, in the Wirral, questioned why healthcare professionals should be telling so many “untruths” in their assessment reports.

He said: “I don’t understand the motivation for the reason behind that, because if I went to see my consultant and he wrote untruths down, then there would be civil actions and things in place.”

Richards said the healthcare professionals “need to be accountable” for what they write in their assessment reports, and he said he believed they were “acting under orders”.

He said that two clients with mental health problems in the last six months had been unable to cope when their benefits were reduced because of “inaccurate” assessment reports.

Both of them had been sectioned because their reduced income meant they had had to reduce their care packages and “they couldn’t cope”.

All four of the experts said they believed that Atos, Maximus and Capita should be held accountable when their assessors include inaccurate information in their reports, while Bryceland said he believed civil servants who make the final decisions on the benefit claims also need to “take responsibility”.

Richards said: “I would agree that the contractor should be the one that gets penalized because I believe the healthcare professionals are acting under orders.”

He said again that he believed there must be some kind of “motivation” for the assessors to record the information inaccurately.

But Nor-Val went further and said she believed that individual assessors should be held accountable.

She said: “There should be fines against healthcare professionals who are making inaccurate statements.

Gary Edwards, from Southampton Advice and Representation Centre, said that “trust needs to come back into this system”.

He said: “The trust is lost between claimants and the providers, the private contractors that the DWP use.”

He pointed to a PIP appeal tribunal he had attended the previous day with a man with complex mental health issues, who claimed that his assessment had lasted just seven minutes.

Atos and DWP had refused to say how long the assessment had lasted.

The claimant had originally been given just two points (a claimant needs eight points to qualify for the standard rate and 12 for the enhanced rate, for both the daily living and mobility elements of PIP).

The tribunal ordered that he should be given 11 points and 10 points. Until this week, he had been without any PIP since June 2016.

Earlier, five disabled people who had themselves been assessed for PIP or ESA had also given evidence to the committee.

All five said they would like to see all face-to-face assessments recorded, and claimants given a copy of those recordings.

Thomas O’Dell said his ESA assessor was “like a smiling assassin”.

She had seen him being pushed into the room in a wheelchair by his father, and then take three steps while holding onto the table, but concluded in her assessment report that he could walk 50 metres.

He said she had touched his leg, and told him she would not continue with further physical tests because he was in too much pain, but then claimed in the report that she had completed a full examination.

O’Dell said she had “fabricated the whole assessment”.

He also said that one of his assessment reports had been altered by another member of staff who had not even been in the room for his assessment.

She said: “At my appeal the tribunal noted that the assessor had been selective in reporting my capabilities and awarded in my favour.”

And Natalie McMinn told how the letter she received after her home assessment “was full of mistakes” and “contradicted itself”.

She said she had been “appalled” by her PIP assessor, and added: “A lot of the information I had given her as well as putting on the forms wasn’t reflected or was wrongly recorded in the award letter after her visit.”

Last week, Disability News Service (DNS) reported how the inquiry has produced more online written evidence from the public than any other investigation ever held by a House of Commons select committee.