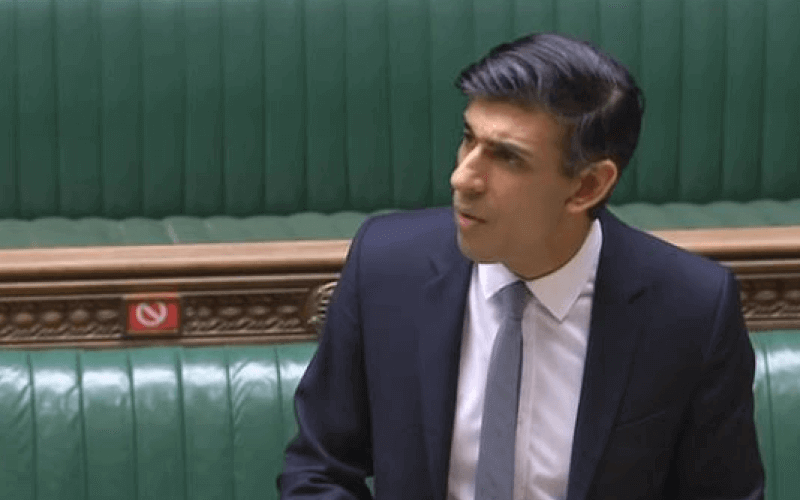 The chancellor has delivered a double blow to disabled people after refusing to extend a vital £20-a-week social security “uplift” to those on so-called legacy benefits, and then failing to take any action to address the social care funding crisis.

In a budget speech of more than 6,300 words yesterday (Wednesday), Rishi Sunak did not mention disabled people, other than announcing he was extending existing funding for thalidomide survivors, and to announce £10 million to support armed forces veterans with mental health conditions.

But he failed to extend the uplift of £20 a week given to universal credit claimants at the start of the pandemic to those on “legacy” benefits such as employment and support allowance (see separate story).

This means that an estimated 1.9 million disabled people will continue to miss out on the £20-a-week payments.

Instead, Sunak (pictured) said he was extending the current uplift for six months and claimed in his speech that the government’s “response to coronavirus has been fair, with the poorest households benefiting the most from our interventions”.

Marsha de Cordova, Labour’s shadow women and equalities secretary, said it was “unbelievable that the chancellor has once again neglected disabled people’s financial support”, and she branded the decision “unacceptable discrimination”.

Dr Rosa Morris, who has personal experience of the work capability assessment and has completed a PhD examining the assessment process and disability benefits, suggested that work and pensions ministers were trying to use the uplift to force people onto universal credit.

She said on Twitter: “It’s an absolute lie that the poorest households have benefited most from the government’s COVID support.

“Those on legacy benefits still aren’t getting the £20 uplift and the government are now trying to use this to force those people to move onto universal credit.”

Stephen Timms, the Labour MP and chair of the Commons work and pensions select committee, also criticised the failure to help people on legacy benefits, including many disabled people and carers, who he said had received no additional support to help them through the pandemic.

He said: “In this budget, the government has once again ignored their needs.

“It cannot be acceptable that people are excluded from support simply because – through no fault of their own – they are claiming older benefits.”

There was also anger at Sunak’s speech failing to include any mention of social care, despite the pandemic further exposing the country’s worsening independent living crisis.

Fazilet Hadi, head of policy for Disability Rights UK, said: “With the National Disability Strategy soon to be published, it is seriously worrying that the government didn’t do anything to tackle the big issues facing disabled people such as poverty, lack of social care and barriers to employment.”

Labour leader Sir Keir Starmer said in his response to the budget: “Although the chancellor spoke for almost an hour, we heard nothing about a long-term plan to fix social care.

“The chancellor may have forgotten about it, but the Labour party never will.”

Last month’s health and social care white paper said the government would bring forward “proposals” later this year, but it has been making such pledges since promising that a social care green paper would be published by the end of 2017.

There was also no mention of social care in the main budget document.

The chancellor did announce a “lifetime commitment” to continue the thalidomide health grant in England beyond 2022-23 when the existing funding runs out.

This means, according to the budget document, an initial payment of £39 million for the first four years after the current grant runs out, with future funding then confirmed every four years “following an assessment of need”.

The funding pays for the cost of personalised support such as personal assistants, adaptations to homes and vehicles, and wheelchairs, for those with impairments caused by the drug being taken by their mothers during pregnancy between 1958 and 1961.

The funding is administered by the Thalidomide Trust, which also manages compensation paid by the firm that marketed thalidomide in the UK.

There are separate arrangements for thalidomiders in Scotland, Wales and Northern Ireland. There are more than 400 people in the UK who currently receive support.

Rowland Bareham, a thalidomider and chair of the trust’s National Advisory Council, said earlier this week, when the Treasury first announced the new funding: “I know that, like me, thalidomide survivors across England will be delighted and relieved that the government has guaranteed funding for their whole lives.

“Since it was introduced in 2010, the government health grant has made an enormous difference to the quality of our lives – helping us to manage our high levels of pain and maintain our mobility and independence without risking further damage.”

Disability News Service asked the Treasury why it had not extended the universal credit uplift to those on legacy benefits, and why the chancellor had failed to address the social care funding crisis in the budget, but it had not responded by noon today.

Meanwhile, outside the budget, regional growth minister Luke Hall announced today what he described as “a new £30 million fund” to increase the number of Changing Places facilities across England.

The funding will be used to install Changing Places toilets in existing buildings in England.

But Graham’s department later confirmed that this was the same Changing Places fund that was announced in last year’s budget, and again last July, when ministers agreed to change the law to ensure that all new large public buildings in England – such as shopping centres, sports stadiums and cinema complexes – would have to include a Changing Places accessible toilet.

The disability charity Muscular Dystrophy UK was quoted in the press release from the Ministry of Housing, Communities and Local Government (MHCLG), and referred to “today’s announcement of £30m worth of funding” as “fantastic news for disabled people across England who need Changing Places toilets”.

The charity later admitted that it knew that the funding had been announced in last year’s budget, but it refused to explain why it failed to mention this in the MHCLG press release.

An MHCLG spokesperson said in a statement: “This is funding that the government originally announced in the March 2020 budget however due to COVID response and lock down it was not possible to deliver it in 2020.”

Changing Places toilets include facilities with extra space and equipment such as hoists and changing benches for disabled people who cannot use standard accessible toilets.