Disabled people have been urged to press their own local authorities to debate coalition plans to close the Independent Living Fund (ILF), after a council voted to demand a rethink, following a campaign led by disabled people.

Councillors in Bristol voted this week to call on their elected, independent mayor George Ferguson to commit to ring-fencing the funding the government plans to pass to local authorities when it closes ILF next June.

They also called on Ferguson to write to the leaders of all the main political parties, asking them to commit to reinstating the ILF, or at least explain how they would provide ring-fenced funding to ensure ILF-users “continue to receive the same standard of care and support they receive at present”.

And they called on Ferguson to work with the leaders of the other eight “core cities” – England’s largest city economies outside London, and Glasgow – to persuade the government “to reinstate a centrally-funded and centrally-administered scheme”.

The motion – passed by 34 votes to 18, with seven abstensions – was put forward by Bristol city council’s Green group, and amended by Labour councillors.

The mayor will now discuss the motion with council officers, before announcing what action he plans to take.

ILF is a government-resourced trust which helps about 18,000 disabled people with the highest support needs – including more than 100 people in Bristol – to live independently, but the coalition plans to close it in June 2015 and pass the non-ring-fenced funding to local authorities.

The success of the motion has been welcomed by Bristol Disability Equality Forum (BDEF), which has campaigned to save ILF and has held discussions with councillors from the Greens, Labour and the Liberal Democrats.

BDEF formed an ILF action group after a conference on the future of the fund that was held in Bristol in September 2013, and was organised by BDEF, with support from the West of England Centre for Inclusive Living, and ILF and council staff.

BDEF said ILF had “made it possible for thousands of disabled people with high support needs to live in their own homes, contribute to family and community life and to take part in work and education”, and warned that its closure would have “a drastic impact on these disabled people, their family members and communities”.

The forum said the closure posed a “very real” threat to ILF recipients in Bristol, who could be forced into “an isolated existence”, or into residential care.

In a statement released before the vote, the forum said: “This all has come at a time when disabled people have already been hit the hardest by welfare reform, cuts to services and [the] combined impact of austerity measures.

“It is for these reasons that we view the closure of the ILF as part of a wider agenda that affects all disabled people.”

The statement added: “The closure of the ILF will shift responsibility to local councils, placing already cash-strapped authorities under more financial pressure.”

Disability Rights UK said it was “delighted” with the vote.

Sue Bott, director of policy and development, said: “It is good to see councillors in Bristol debating what is such an important issue for many disabled people.

“We have been able to contribute to this debate through our FOI [Freedom of Information Act] requests to local authorities on what their intentions are when the ILF transfers to them.

“We urge disabled people everywhere to talk to their local councillors and ask them to debate and pass a motion on similar lines to the one passed in Bristol.” 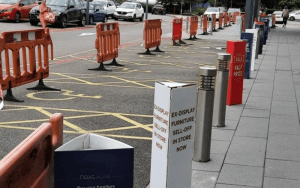