You are here: Home / Transport / Campaign hopes to force improvements to ‘disgraceful’ access to rail travel 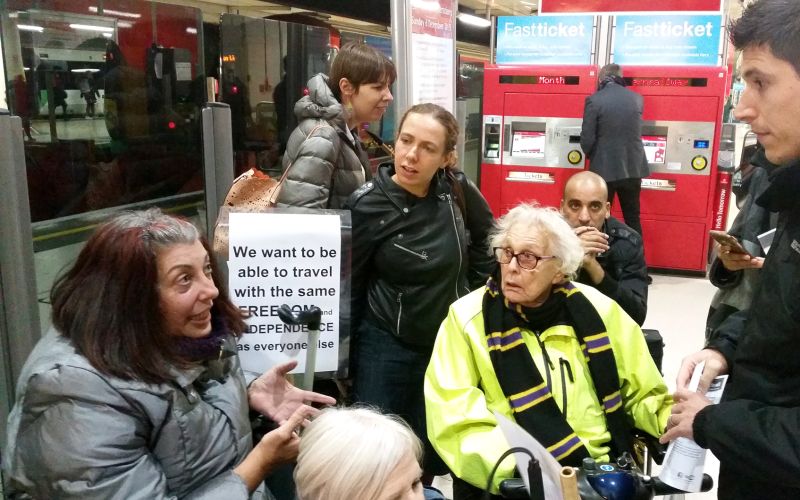 A new user-led campaign is calling on the government to address the “disgraceful” and “unacceptable” treatment experienced by disabled rail passengers.

Transport for All (TfA) has issued a series of seven demands to the government and rail industry as part of its Rail Access Now campaign, and has described the current situation as a source of “national shame”.

Next month, on 5 April, TfA is planning a protest about access to services on the much-criticised Southern Rail network.

The campaign has been backed by Paralympian Anne Wafula Strike and commuter Dave McQuirk, who both spoke this week of the “shocking” treatment they have received when using the rail system as wheelchair-users.

Among TfA’s demands is for the government to reverse the “shameful” decision to defer until at least 2019 nearly half of the planned spending on its Access for All programme, which provides funding to improve access at rail stations.

TfA also wants to see a system that allows disabled passengers to “turn up and go” if they want to travel by train, rather than having to book assistance 24 hours in advance.

McQuirk told this week how he had to book assistance in order to guarantee that he can travel to work on the rail system as a commuter.

But he said that his assistance fails to turn up for nearly half of his journeys, forcing him to drag himself onto the train, despite his frequent complaints.

He said: “I’m an articulate, confident, regular traveller and I still have this incredible stressful ‘will I, won’t I?’ worry every morning.

“Everyone knows commuting is tedious and subject to disruption – I can put up with that.

“What I find infuriating is the difficulty, delay and uncertainty that I face just because I’m a wheelchair-user trying to use the railway network like anyone else.

“That’s why Transport for All’s Rail Access Now campaign is so important.

“It’s time we held the government and train operators to account for their record on accessibility.”

Wafula Strike has backed the campaign after revealing earlier this year how she was forced to wet herself on a CrossCountry train because the accessible toilet was out of order.

She said: “I was robbed of my dignity on one of my train journeys.

“It made me feel like I should just stay in behind closed doors.

“Having access to a toilet is such a basic right and I know I am just one of so many other disabled people who have suffered from this – that’s why I chose to speak out.

“I may have an impairment but the barriers society puts in my path are the only things that hold me back.”

The Department for Transport had not commented on the campaign by noon today (Thursday).

But a spokesman for the Rail Delivery Group, which represents train operators and Network Rail, said: “Rail services are more accessible than ever.

“We don’t have a fully accessible rail network yet, but there have been huge improvements as we work to make it as easy as possible for everyone to enjoy travelling with us.

“We value the contribution of Transport for All, campaigners and disabled customers to our work and plans to improve services, trains and stations – and their help in securing more funding for more improvements.

“Record numbers of disabled people are travelling by train and the vast majority simply turn up and go, but we know we can do better.

“We want to ensure that those who most require assistance get the help they need too.

“A European Commission report (2013) rated Britain’s railway the most accessible in Europe, and all trains must be fully accessible by 2020 [which will include audio-visual announcements].”

He said that more than half (52 per cent) of stations have step-free access, to and between all platforms, to an “acceptable” level – compared to 44 per cent in 2005.

On “turn up and go”, he said: “Customers who haven’t pre-booked assistance will never be turned away.

“There may be a wait, but the train company will make the necessary arrangements for the customer.”

He added: “Train companies have procedures for providing assistance or alternative arrangements when a station is unstaffed.”

And he said that government and Office of Road and Rail policy was that “mobility scooters and wheelchairs must be treated the same.

“For safety reasons mobility scooters and wheelchairs are not allowed on board if they are too big for the wheelchair space.

“Train companies are in discussion about a possible common policy on mobility scooters.”

He said the industry was “always working to improve customer information so that people can make more informed choices”.

But Faryal Velmi, TfA’s director, said: “It beggars belief that in 2017 rail companies, despite making handsome profits, are being allowed to treat disabled people in this way.

“How many more horrific stories of the shameful treatment disabled people experience on a daily basis need to hit the headlines before the government take action?

“It’s time for us to take the fight to the government and the train operating companies and demand that they protect disabled people’s basic right to travel and live their lives like anyone else.

Picture: Transport for All campaigners at a rail access protest in 2015