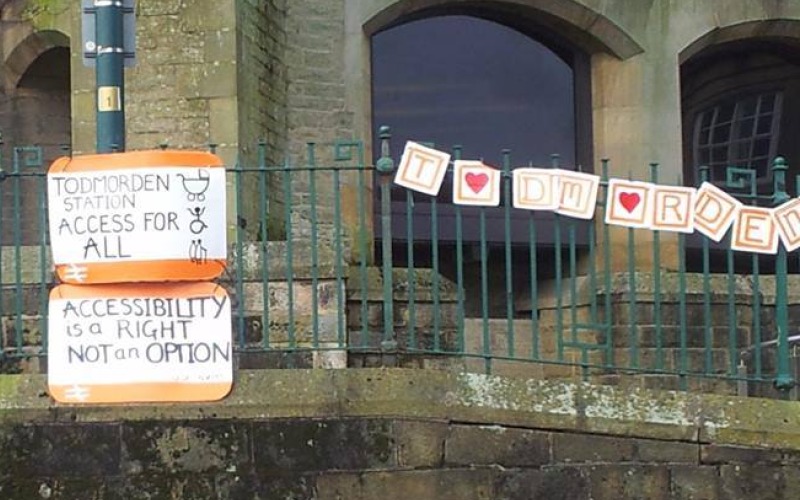 A wheelchair-user has launched a campaign for access improvements to her local train station, so she will no longer have to use an unlit park where she was threatened and harassed by a mugger.

Julie Forshaw’s home town station of Todmorden is accessible to her when travelling in one direction, so on return trips she has to get off at the next station, Hebden Bridge.

To return to Todmorden by bus, she has to make her way through a park, where three months ago she was subjected to an attempted mugging by a man who threatened her with a “bloody death” because she refused to give him money and cigarettes.

Although she was physically unharmed, she was left shaken by the incident and now feels unable to travel by train without a companion.

Passengers in her situation would normally be able to claim a free taxi-ride from the rail company – as long as they phone 24 hours in advance – but Forshaw said there were no accessible taxis in the local area that can take electric wheelchairs like hers.

She once had to wait three hours for an accessible taxi to arrive from Huddersfield, even though it had been booked in advance.

And because she often receives short-notice phone calls about hospital treatment or tests, she cannot always give advance notice of her travel plans.

Forshaw said: “I am now terrified of coming home on the train, which means I get out even less than I did before, and it makes it harder to go to my hospital appointments, which are in both Leeds and Manchester.

“This has made me realise that I really need to do something about the access to the stations, as Network Rail and Northern Rail continue to ignore the need for it.”

She said that dealing with the two companies was like “walking through concrete”, as neither were prepared to take responsibility for the access problems.

Forshaw has linked up with Calderdale Solidarity Federation to launch a Facebook campaign and a petition on Change.org – as well as holding demonstrations at Todmorden station – aimed at persuading Network Rail and Northern Rail to make Todmorden and Hebden Bridge accessible.

Hebden Bridge is set to receive funding through the government’s Access for All programme of station improvements, but no funding has yet been found for Todmorden.

One disabled person who has signed the petition said: “I have tried endlessly to get accessible station platforms for the last 29 years yet little has been done to make this possible.”

Pete Myers, client and stakeholder manager for Northern Rail, which leases the stations from Network Rail, said: “There are no current plans to improve access at Todmorden, however we are happy to liaise with Network Rail and other stakeholders to investigate the possibility of this in the foreseeable future.

“Where access is not available we provide a Passenger Assist service, providing a taxi from the nearest accessible station, and these are booked in advance to arrive to collect the customer from the service they inform us they are travelling on.

“We realise that providing 24 hours’ notice is not always possible. However, it is needed in order for us to liaise with the relevant stations, train crew members and specialist taxi firms and co-ordinate assistance for passengers travelling in wheelchairs effectively.

“We will of course take requests at short (or even without) notice, but this may involve a short wait for the transport to arrive.

“We apologise if the taxis provided have proved unreliable on occasion and this should be reported to our customer relations department so it can be investigated, and put right.”

“We recognise there is room for improvement at certain stations, which is why we work with the train companies to mitigate against this as much as possible.

“We will always work with our partners and third parties to improve access but there has to be the funding available to allow us to do this.”

So far, Network Rail has declined to say whether it believes it is acceptable to force a wheelchair-user to make her own way through an unlit park because of a station’s access failings.