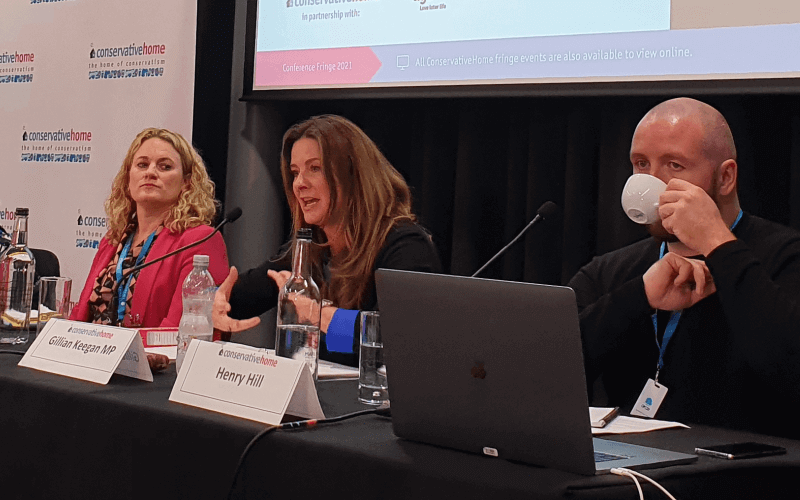 The newly-appointed care minister has admitted that she was completely unaware of disabled people’s criticism of the prime minister’s controversial social care reforms.

Gillian Keegan, appointed to the role only last month, told Disability News Service (DNS) this week that she had “not looked specifically at the disability response” to the reforms.

The Chichester MP has become the latest in a long line of Conservative ministers – and opposition politicians – to ignore the voices of disabled people, their user-led organisations, and service-users, and to focus instead on the views of large non-user-led charities, private sector care providers and local government.

Boris Johnson’s reforms were met with almost universal criticism across the disabled people’s movement over the inadequate level of funding, the failure to address the needs of working-age disabled people, the lack of detail, and the disproportionate impact of the plans on lower-income workers.

Where Boris Johnson called his plans “responsible, fair, and necessary” last month, disabled people’s organisations and grassroots groups, and disabled campaigners, described them as “disappointing”, “regressive” and even “insulting”.

But when asked by DNS about the response of disabled people’s organisations and user-led grassroots groups to the plan, Keegan insisted that “the sector” had so far “responded very positively” because, she said, they saw it as “brave”, “necessary” and realised that “no-one else has done it so far”.

She told DNS: “I don’t know the specific things that have come from that lobby but obviously I will work with the disability rights people to understand those better, but on the whole I think we have had very positive support from the sector.”

Keegan (pictured, centre) was speaking at a fringe event, organised by the older people’s charity Age UK and the right-wing blog Conservative Home, at the Conservative party conference in Manchester.

She had told the meeting earlier that the social care system was “under way too much pressure, we all see that… most of all for the people who are in the care system”.

She said there was “a lot of anxiety” over the funding for the plan “and where it comes from in the future”, and she added: “We have to make sure that that [national insurance] levy continues and it continues to underpin this system that we are going to build.”

Keegan also accepted that there were concerns about the support needs of working-age adults.

The plans focus on the introduction of a new 1.25 per cent national insurance levy and a similar rise in dividend tax rates, ringfenced for health and social care, but with most of the new funding put aside for the NHS, at least for the first three years.

The key social care measure is the introduction of a new cap of £86,000 on lifetime personal care costs and a more generous support system for those with significant assets, particularly older people who own their own homes.

On the decision to source the funding from the national insurance levy, and concerns that it placed too much of a burden on younger people, Keegan said: “It’s about getting the right balance.

She said the public trusted an increase in national insurance more than a rise in “general taxation” because it had been ring-fenced for health and social care.

He said: “What kind of society would that be? Health – and social care – begins at home. Family first, then community, then the state.”

He focused – in his brief remarks on social care – on the support needs of older people, and said the government’s reforms meant that “we can plan with confidence that we and our families will be protected from catastrophic costs”.