You are here: Home / Arts, Culture and Sport / Children begin to receive prostheses that will help them run, swim… or play the violin 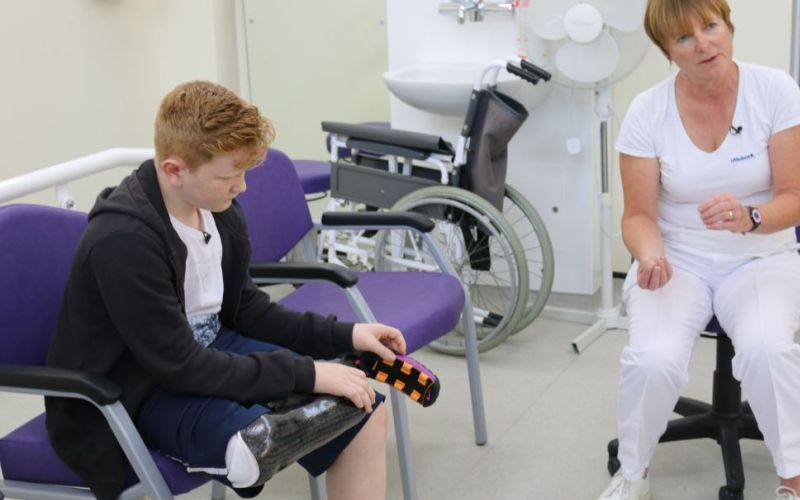 Hundreds of disabled children in England are starting to benefit from a new fund that will provide them with the specialist prosthetic limbs they need to take part in sports and other activities that were previously inaccessible to them.

The Department of Health (DH) has provided £750,000 to fund running blades and other activity prostheses in a trial that will allow under-18s who were born without a limb or have lost a limb to take part in activities such as team sports, swimming, climbing, dancing and playing musical instruments.

The funding is being provided through NHS limb centres, which are being given the money to source and fit the prostheses.

Another £750,000 is linking research centres with expertise in child prostheses with experts from the NHS, industry, and clinical academia.

The £1.5 million fund was announced by health secretary Jeremy Hunt during last summer’s Paralympic Games in Rio, and the first children have now begun to receive their activity prostheses.

Although the trial will only run to the end of 2017-18, there are hopes that – if it proves a success – DH will extend the funding.

LimbPower, the national disability sports organisation for people with limb impairments, is supporting DH by alerting families to the fund’s existence and helping health professionals access it.

Carly Bauert, children’s prostheses coordinator for LimbPower, whose nine-year-old son Oliver had a running blade fitted when he was six, said she hoped that more than 500 children would benefit during the two years of the trial.

She said she believed it would make “a huge difference” to the children who took part.

She said: “These are specialist activity limbs that are not normally available on the NHS.

“If you have a child who has an amputation or a congenital limb disorder, as a parent… not to be able to provide them with what they need to participate in as normal a childhood as possible is very, very hard.

“This is about inclusion and activity. Not all of our children are going to be Paralympians, but they all need to have an active childhood.”

She said the fund was helping one girl who wanted a prosthesis that would allow her to dance and “go up on her points”.

One concern is that if DH decides not to renew the fund next year, children that have benefited from the prostheses could be left without replacements when they grow out of them.

But Bauert said: “What we have got to show is that there is a demand and it is needed.

“As a mum of a prosthesis-wearing child who wears a blade, I am hopeful and very optimistic that with the right research and evidence we can show the government it is needed and required for these children.

“My little boy got his blade when he was six and it changed his life completely.

“It gave him confidence at school, with friends, he joined the rugby and football clubs, his confidence just grew. “

Richard Whitehead, a double leg amputee and double Paralympic 200 metres champion, said: “Having run thousands of miles on prosthetics myself I’m delighted to see the next generation take their first steps in experiencing the freedom of running, whether just for general enjoyment or towards achieving their own Paralympic ambitions.”

Hunt said: “Team GB [sic]* surpassed everyone’s expectations at last year’s Paralympics and this investment will ensure the next generation of children who have either been born without a limb or who have lost a limb will be able to lead an active life.

“It’s wonderful that the first children are now receiving their blades and that they will be able to reach their sporting potential – I hope some may even be selected in the future as members of Team GB [sic]. “

*Britain’s Paralympic team is known as ParalympicsGB. Team GB competes in the Olympics

Picture: 13-year-old Ben, from Brighton, one of the first children to benefit from the trial, being fitted with a running blade at Sussex Rehabilitation Centre at Brighton General Hospital