A technology company has refused to remove an image used as part of a poster and internet advertising campaign which includes “zombies” with features that resemble people with facial disfigurements.

Disabled campaigners have branded the adverts by Powwownow – which sells conference call facilities to businesses – “offensive”, “insensitive” and “disempowering”.

The images are titled “Avoid the Horror”, and feature a group of Zombies with scars, bleeding mouths and exposed teeth, distorted by plastic masks.

James Partridge, chief executive of the user-led charity Changing Faces, contacted Powwownow to ask them to remove the adverts.

One of the zombie characters, he said, even looked similar to how his own face had looked after the car fire that left him with 40 per cent burns.

In a blog posted this week, Partridge said the moment he saw the poster was particularly “disquieting” because it was at King’s Cross station, the scene of a huge fire in 1987 that left 31 people dead, and he knew several of those who had survived but were scarred in the disaster.

He added: “The ad’s call to action to ‘Avoid the Horror’ is just as disturbing, reinforcing as it does the harmful association that people who wear masks as part of their treatment and who have burn scarring, are to be feared and avoided.”

He said Changing Faces had campaigned for many years “against the offensive use of facial scarring, asymmetrical or missing features and facial masks to deliberately incite horror, fear and revulsion in popular culture”, and had drawn attention to society’s tendency to describe scarring as “horrific” and disfigurement as “terrifying”.

Despite Powwownow originally agreeing to remove the zombie image from online versions of the advertising campaign, the company later reinstated it, and refused to remove any of the posters.

Partridge said in his blog: “Changing Faces is determined to challenge any example of prejudicial portrayal, because we are not living in the Middle Ages nor in a fantasy land nor in a horror movie.

“We live in the UK and it is time that people with disfigurements were given the respect and dignity they deserve.”

A Powwownow spokesman said the images used in the campaign – zombies, as well as clowns and demons – were “commonplace in the world of computer games, TV, entertainment and film”, while the campaign headline “‘Avoid the Horror’… reinforces the context of complete fantasy”.

He said the company had originally pulled the advert “as a mark of respect to the charity’s perspective”, before reviewing its advertising strategy.

He said: “After this robust review, we re-instated the advert as a reflection of our belief in the creative concept, its clear reference to the fantasy horror genre and the fact that we are in no way targeting or discriminating against people with facial disfigurement, or indeed any people.

“The adverts focus purely on the horror of the commuting experience and in no way target any individuals.”

He said there was “absolutely no intention to offend anyone at all”, and the campaign was “built around expressing sympathy for all people at the mercy of public transport and providing practical solutions to make their lives easier”. 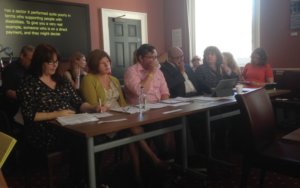 Experts call for focus on Access to Work, adjustments, attitudes… and funding