You are here: Home / Employment / Experts call for focus on Access to Work, adjustments, attitudes… and funding 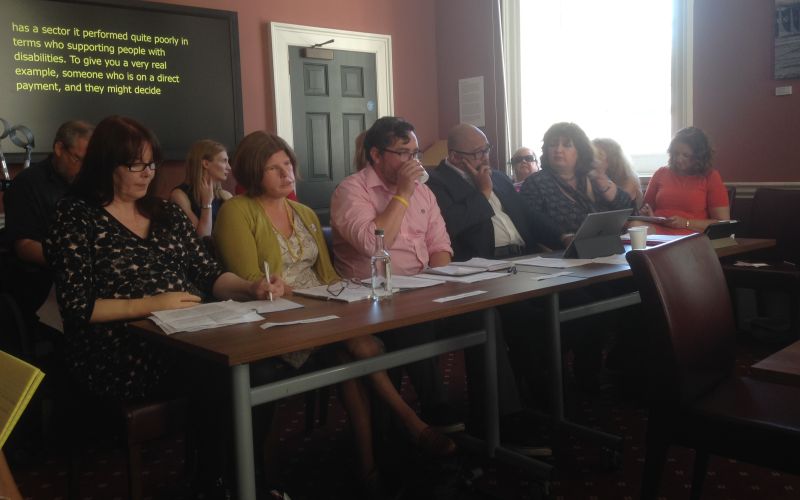 Disabled experts have suggested a raft of ways in which the government could help to fulfil its commitment to halving the disability employment gap.

The ideas came during a public evidence session held at Somerset House in central London, part of an inquiry by the all-party parliamentary disability group into how to increase the number of disabled people in paid work.

The session was organised by Disability Rights UK, which runs the parliamentary group’s secretariat, alongside students from King’s College London, who are working on the inquiry.

Henrietta Spalding (pictured, second from left), head of advocacy for the disfigurement charity Changing Faces, told the inquiry session that she believed there should be mandatory training for managers on disability and health conditions.

She said that people’s attitudes and biases needed to be “re-ordered, re-aligned” so that disabled people can “present the skills, strengths and experiences that they have”.

She described the discrimination experienced by a skilled and qualified nursery nurse with a congenital condition, who has had dozens of interviews but has failed to secure a job. “They don’t give her a fair chance to present who she is. She’s not able to even be heard.

“You have either got to be doubly good or you’re going to be discounted. She is being screened out.”

Spalding pointed out that the reasonable adjustment needed for people with facial disfigurements in the workplace was usually a change of attitude among work colleagues and managers, rather than any change to physical barriers.

She also stressed the importance of having role models for disabled people who are considering their futures and careers, to avoid them having low expectations.

She said: “They are the people who have succeeded, they have found a way to navigate and manage.”

Paul Milton, an artist and ambassador for the British Dyslexia Association, told the inquiry session that there were “a lot of hidden hurdles” facing disabled people seeking employment, including the difficulty of securing qualifications for people with dyslexia.

He called for “nitty-gritty” support for disabled people, and enforcement of the Equality Act.

He said: “It needs to be there in real life because people can just say, ‘No, you’re not suitable.’ We need to enforce the Equality Act. It doesn’t work.”

Graham Price, a member of the management board of Shaping Our Lives, said it was “absolutely absurd” that it was not possible for a disabled person to lodge a claim through the Access to Work (AtW) scheme until they had started their new job, which meant an employer often had to wait months before the support for their new employee was in place.

Price also said it was “nonsense” that the government claimed to want to close the disability employment gap at the same time that it was cutting funding to councils that were supporting user-led organisations “who themselves are offering a lifeline to unemployed disabled people”.

Pierre Marsh (pictured, second from right on panel), of the user-led dyslexia charity AchieveAbility, called for a more positive attitude to reasonable adjustments from employers.

He said: “If you go up to an employer and say, ‘I need reasonable adjustments,’ they will say, ‘I will get someone else.’”

He said that employers usually only provide reasonable adjustments if they are forced to do so by legal threats.

But he said: “When you do start to look at the possibilities of making reasonable adjustments, you start looking at people in a completely different context.

“You look at what they bring to the table to make the organisation better. That’s the concept of reasonable adjustments.”

Marsh, who attended a special school but later secured a degree and a masters, said: “The issue is intellect and how do you capture it and put it into the workplace.”

And he called for the “useless” department that runs the government’s Access to Work (AtW) programme to be scrapped and replaced by an organisation that “captures capability” and allows disabled people’s skills to be matched to the areas that need them.

Kevin Millin (pictured, centre), a quantity surveyor and founder of Disabled People in Construction, said that impairment was seen as a “weakness” in his industry, which was slow to act on equality issues and “unless forced to will not make changes”.

It took him years working in the industry, with its culture of long working-hours, before he felt able to disclose his impairment, he said.

But he told the evidence session that construction companies were capable of “rapidly changing if they are forced to”, and pointed out that the government was the biggest “employer” in the industry, spending hundreds of billions of pounds on projects.

He suggested that companies bidding for government construction contracts should be told that they will only be successful if they employ a certain proportion of disabled people.

Dr Jacquie Nicholson (pictured, left), a member of the founding steering group of the National Association of Disabled Staff Networks, which mainly focuses on the further and higher education sectors, called for funding for networks of disabled employees, which provide vital peer support and an opportunity to talk about “difficulties as well as positives within the workplace”.

She said: “There are benefits for the organisation to hear from disabled staff about policy development but also for the staff in terms of their own confidence and developing their own skills.”

Jacqueline Winstanley, who runs consultancy Universal Inclusion and chairs Fluidity, a charity which facilitates inclusive self-employment, called for the focus of disability employment within government to move away from the benefits-focused Department for Work and Pensions and towards the Department for Business, Energy and Industrial Strategy (DBEIS).

She called for DBEIS to develop a programme to promote inclusive entrepreneurship, in partnership with disabled people, and said there was a need to see disabled people “no longer as tax burdens but as creative citizens who can grow businesses”.

Jane Cordell, a former senior diplomat and now founder of the coaching and equality consultancy Getting Equal, said there needed to be much more publicity about AtW.

Five years ago, Cordell lost her employment tribunal appeal in a disability discrimination case against the Foreign Office over the cost of providing her with lip-speakers.

She said: “I want to see adverts on bus shelters about AtW. Small employers haven’t heard about it.”

And she said there needed to be more support for disabled people to become self-employed.

She said: “A disabled person needs to feel less afraid that they can start something and grow it.”

Cordell said that disabled people needed to be able to access mainstream staff networks and not just those networks set up for disabled staff members.

She said: “Deaf colleagues are not being able to break out of deaf circles. At the moment, most influential people aren’t disabled.”

And she said the government should focus more on social enterprises, which she said were increasing at about nine times the pace of other sectors.

She said: “We don’t believe in tokenism. We believe in real jobs for people.

“Social enterprise is one way we can get people together with a common aim, but it’s really difficult to get funding.

“If you want something to happen you have got to resource it. You think because we are a charity that we can do things for nothing.”

She said that AtW only supports businesses that can turn a profit, and she pointed out the risks of disabled people having low expectations and being pigeon-holed.

She said: “I was unemployed for 20 years because my doctor told me I couldn’t work, and I believed him.”

Dr Mandy Maddock, of the user-led community interest company Disabled Parents and Carers Together, also raised concerns about the lack of funding for user-led organisations.

“They have all got the right words but when it comes to putting that into action and we say, ‘Fund us to do this,’ then they say no, we have not been successful.

Meanwhile, the disability and Deaf arts organisation DaDaFest has been awarded a £275,000 Big Lottery Fund grant to increase the chances of young disabled people finding work as artists and producers in the creative sector, through training, mentoring and placements within arts organisations.

The DaDaFest Rookies scheme, which is led by young people, builds on the organisation’s successful Young DaDaFest programme, which has seen more than 2,500 young people take part in arts events and projects.

Ruth Gould, artistic director of DaDaFest, said: “We are so proud that the young people have led, shaped and developed this programme.

“DaDaFest are excited about being able to support new and emerging talent and confidently believe that in three years’ time the result will see many young people in jobs, on the stage, in galleries and in film and TV and enrich the arts sector to be more reflective of an inclusive and diverse society.”