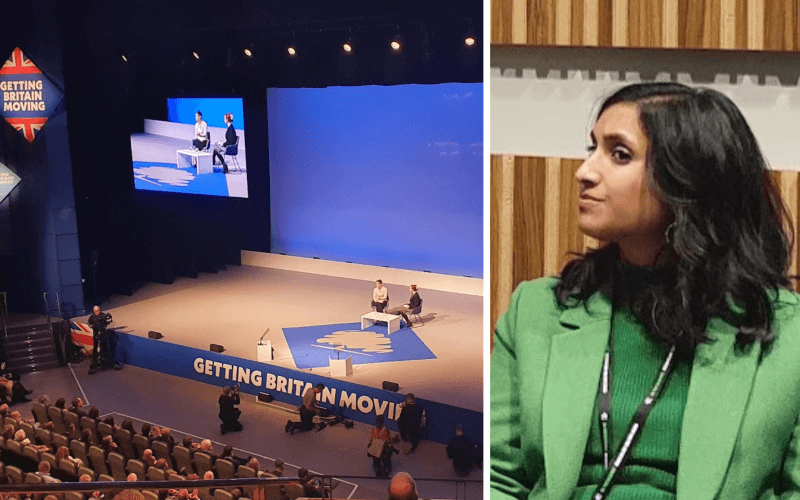 The Conservative party has undermined its new minister for disabled people just days after her appointment, by refusing to back her promise that disability benefits will be uprated next year by the full rate of inflation.

Claire Coutinho (pictured, above right) was making her first public appearance as the new minister at a fringe meeting at the party conference in Birmingham on Sunday when she made the promise.

She had been asked by Disability News Service (DNS) if she could guarantee that disabled people would not pay through real terms cuts to their benefits for the chancellor’s decision to cut taxes for the most well-off.

Coutinho said – correctly (PDF) – that the government was obliged by law to raise some benefits, including personal independence payment (PIP), disability living allowance (DLA) and carer’s allowance, by the rate of inflation*, as part of the annual uprating process.

She also said that increases in other benefits – such universal credit and employment and support allowance – “will be looked at” as part of the “normal process” of uprating, with April’s increases to be announced next month.

When DNS asked her to confirm that benefits such as PIP and DLA would be increased by the September rate of inflation, she said: “Yes.”

And when asked if that was guaranteed, she replied: “Yes, I’ve checked with the department [for work and pensions].”

Although the government has a legal duty to raise benefits such as PIP, DLA and carer’s allowance by the rate of inflation, there is nothing to stop it trying to change the law so that that would no longer be the case.

DNS contacted the Conservative party press office several times this week to try to confirm that what Coutinho said was correct.

The party had refused to comment on Coutinho’s promise by noon today (Thursday), despite being warned that its failure to do so could undermine the new minister.

Instead, a party press officer eventually referred the question to the Department for Work and Pensions, which confirmed – because the conference was a party political event – that it could not comment on the minister’s words.

The refusal to back Coutinho came during a chaotic party conference in which – following an early U-turn on plans to scrap the 45p income tax rate – a series of leading Conservative figures then called on the new prime minister, Liz Truss, to dismiss suggestions from people close to her that benefits would not be increased by the full rate of inflation next April.

Among those calling for the full increase was former work and pensions secretary Sir Iain Duncan Smith, who said that if the government wanted to grow the economy, the best way of doing so was to support people at the lower end of the income scale through the benefits system.

He told a ConservativeHome and Joseph Rowntree Foundation (JRF) fringe meeting: “I would like the government to think of it as a positive. Support the people who need it the most.”

Katie Schmuecker, JRF’s principal policy advisor, had earlier told the meeting that the basic rate of benefits was now “at its lowest in real terms for 40 years” and was close to “destitution” level for single adults without children.

Another former minister to speak out on benefits was John Glen, a Treasury minister for more than four years until July this year.

He told a Centre for Social Justice fringe meeting: “We need to be a united country that recognises that for the poorest, this is going to be an incredibly challenging time, and therefore we need to support people, as the new chancellor set out in the energy support package, through these difficult times.

“We mustn’t revert to a narrative that says there are people who are relying on benefits and they shouldn’t be uprated properly.”

Glen also appeared to criticise Truss for comments she made about the cost-of-living crisis earlier this year, during the Conservative leadership contest, when she told the Financial Times: “Of course I will look at what more can be done.

“But the way I would do things is in a Conservative way of lowering the tax burden, not giving out handouts.”

Glen, who supported Rishi Sunak in the leadership election, said: “What is really clear to me was that there was some talk over the summer about the need to end handouts.

“No there isn’t, there can’t be. There are some people who are in such a vulnerable state there isn’t a growth imperative or outcome that is going to resolve the situation… this coming autumn or winter.”

Meanwhile, the new work and pensions secretary Chloe Smith – until recently the minister for disabled people – avoided making a set-piece conference speech, choosing instead to be interviewed by entrepreneur Eleanor Howie, who set up her business Valiant Lingerie after opting for a preventative mastectomy because of a family history of breast cancer.

Smith, who herself has recovered from breast cancer, told the conference (pictured) that “work is very good for one’s health”.

Many disabled people and others have said repeatedly that that is not always true, and even Public Health England has said only that being “in good work is better for your health than being out of work”.

Although she made no new policy announcements, Smith suggested that she would order a fresh bid to force those on out-of-work disability benefits into the workplace, echoing the comments of her predecessor Therese Coffey at last year’s conference.

Smith told a half-empty venue on Monday: “We do see rising inactivity driven by increasing numbers of people leaving the workforce to health problems and also some different choices being taken by the over-50s. We of course want to retain that talent.”

Her plans are likely to emerge in a new health and disability white paper, which is expected soon.

She also told the conference: “We need as Conservatives to focus on what people can do, not what they can’t.”

The use of that phrase dates back through various Conservative ministers over the last decade and then even further, at least as far as the Labour work and pensions secretary Peter Hain in 2007, who used it to explain the need to introduce the new employment and support allowance and the work capability assessment.

As some had predicted when the legislation was passing through parliament earlier this year, Smith tried to use the passing of the new British Sign Language Act – a private members’ bill she had supported – as a sign that her government was committed to addressing disabled people’s exclusion from society.

She said: “I believe there is much more we can do to help people get the chances that they deserve because of course as Conservatives that is what we believe, and everyone needs the chance of a good job.

“When I was the minister for disabled people, I saw as an example how Deaf people were too often left out, too often excluded from work or in education or in wider society and that was why I was so proud to help lead the changes represented by the BSL Act.”

In fact, although the act recognised BSL as a language in England, Scotland and Wales, British Sign Language-users were warned that it provided them with no new rights and offered no new funding.