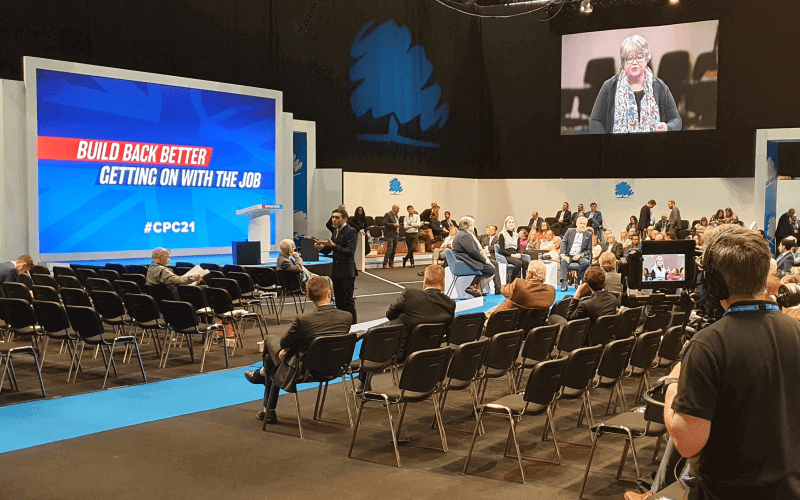 Work and pensions secretary Therese Coffey has strongly signalled that her department will launch a new bid to try to push more disabled people with high support needs into work.

Coffey, speaking at a fringe event at the Conservative party conference in Manchester, said she wanted to focus on those people who were currently seen as not being able to do any work.

She said she saw this approach as “a positive, an escalator, trying to help people”, which would leave the out-of-work disability benefits system as “a welfare net rather than a welfare trap”.

She referred during the event to the need to cut spending on disability benefits, particularly personal independence payment (see separate story).

The focus on those currently in the support group of employment and support allowance (ESA) – and its universal credit equivalent – appears to be a return towards the controversial reforms suggested five years ago in the Improving Lives green paper, which caused shock and anger among disabled campaigners.

That green paper suggested that all ESA claimants with the highest support needs – those in the support group – could be told to stay in regular touch with their local jobcentre, or risk having their benefits sanctioned.

A year later, the government backed down and said that it was now trialling a voluntary approach.

Coffey said this week that she wanted to focus more on “what people can do rather than the benefit system being driven currently by what you cannot do”.

She appears not to realise – or to be hoping that disabled people will not remember – that this was exactly what ministers were saying a decade ago.

In 2013, the then employment minister, Esther McVey, was among many ministers who used the phrase when she wrote in a paper on the developing disability employment strategy that the government’s focus was now “on what people can do rather than what they can’t do”.

Coffey told the fringe event, hosted by The Centre for Policy Studies, the right-wing thinktank co-founded by Margaret Thatcher: “One of the biggest things that I am wanting to try and make sure we focus on in the next few years is for people who right now think they cannot work.”

She said she wanted to “flip our system about welfare benefits in terms of people with health conditions [so] instead of our system basically trying to encourage people to show how they really cannot do any work at all, to actually flipping that and see what is it that you can do and support you to do through some of our programmes, Access to Work and similar.”

In response to a question from The Mirror’s Dan Bloom, she said that ministers were “not trying to demonise people who can’t work”.

She then appeared to refer to some of the many disabled people whose deaths have been linked to DWP’s failings over the last decade, saying: “I know [The Mirror] and the BBC will have many images of people where wrong decisions have been made, quite clearly, but generally I think it is about trying to help people in that direction without having the demonisation you suggested.”

Coffey said that ministers’ original target had been for about 20 to 25 per cent of people on ESA to be in the support group – with the others in the work-related activity group, for those who have limited capability for work but must take part in some work-related activity – but the figures showed that “more like 80 per cent” were now being placed in that group.

She claimed that disabled people tried “to accumulate all sorts of different points in the [assessment] process in order to reach a certain level of support”, and she said she wanted “to see what we can do more to help with that”.

But she failed to point out that these figures are based on the small number of ESA work capability assessments now carried out, because of the move towards universal credit.

DWP confirmed yesterday (Wednesday) that it had yet to publish any data on work capability assessment outcomes for those claiming universal credit (UC), even though it began rolling out UC to replace new income-related ESA claims more than five years ago.

Picture: Therese Coffey speaking later in the conference to a half-empty auditorium