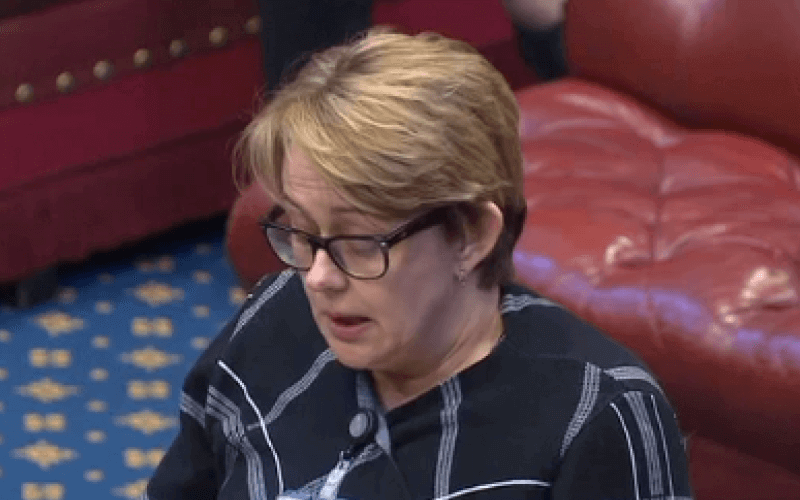 “Draconian” legislation that is set to have a “life-changing” impact on disabled people’s ability to access social care has become law, after being passed by parliament in just three days.

The Coronavirus Act was granted royal assent late yesterday (Wednesday) afternoon after it was passed by both Houses of Parliament, despite being described by a disabled crossbench peer as “a health and social care obliteration bill by a different name”.

In her widely-praised speech, Baroness [Tanni] Grey-Thompson (pictured) also told fellow peers during the bill’s second reading in the Lords on Tuesday that the measures outlined were “draconian” and “life-changing for disabled people”.

She said the bill was “a temporary suspension of most of the duties contained in the Care Act” and asked if it was “any more than just a cost-saving exercise”.

She added: “Decisions will be taken by someone else about our usefulness in the next few months that we will have no control over.

“I am starting to worry that disabled people might be seen as expendable during this pandemic.”

She had driven to the House of Lords from her home in County Durham to take part in the debate on Tuesday, because of the bill’s “huge” impact on disabled people.

Her plans included disinfecting a spare wheelchair before she left and not using it again on her return home, changing her clothes before she left, and planning her route to ensure she touched as few surfaces as she could.

She said before the debate: “If this wasn’t a serious bill with massive consequences I wouldn’t be there.”

Following the debate, she said, she planned to self-isolate at home “because that is what the people who work in the NHS need”, adding: “I’d be dead without the NHS.”

Another disabled crossbench peer, Lord [Colin] Low, also raised concerns about some of the key measures in the bill, which he said posed a threat “to structures of social and community support, already seriously eroded by a decade of austerity”.

He said: “After all, the fact that coronavirus is on the scene does not mean that pre-existing needs for support have somehow gone away.”

Labour’s Baroness Thornton said the government’s plans would “roll back 30 years of progress for disabled people”.

She said: “While we may tolerate this for a short period, we cannot tolerate it for very long.

“All the years that we fought for disabled people’s right to social care are being eroded and undermined, along with their civil liberties and right to support.

“We need to put the [government] on notice that, particularly in this House, we will tolerate this for as short a period as possible.”

Lord Bethell, for the government, said there would be an “absolute and unavoidable obligation” on local authorities to “meet everyone’s human rights as an absolute minimum”.

He said the government was drawing up guidance for local authorities.

The previous day, MPs had debated the bill.

Health and social care secretary Matt Hancock had said the government’s goal was “to protect life and to protect every part of the NHS”, and that the bill had been “jointly agreed with all four UK Governments [and] gives us the power to fight the virus with everything that we have”.

He said the social care measures were to “make sure that when there is a shortage of social care workers, those who need social care to live their everyday life get it and can be prioritised ahead of those who have a current legal right to social care under the Care Act 2014 but for whom it is not a matter of life and death”.

But Labour MP Helen Hayes warned that the bill’s measures created “a significant risk that some vulnerable people will have care withdrawn as resources are prioritised and that some will be left in truly desperate circumstances”.

The most significant watering-down of the government’s original bill meant that there will now be a vote in parliament on whether its measures should continue every six months.

The powers granted by the act could otherwise last for up to two years, with ministers reporting to parliament every two months on how they have used those powers.

But the government rejected other proposed amendments, which were eventually withdrawn by crossbench and opposition peers and MPs, including the need for an independent body to monitor the impact of the legislation on the social care system.

*Sources of information and support during the coronavirus pandemic include the following: