You are here: Home / Arts, Culture and Sport / Countdown to Rio: Nicholls looks for a ‘crowning’ achievement 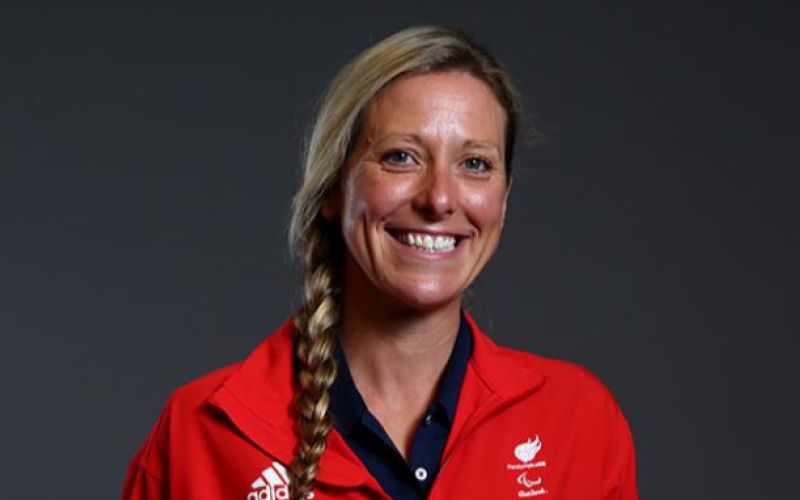 She joined Hannah Cockroft on her lap of honour after finishing seventh behind Britain’s double gold medallist in the T34 200 metres in London 2012.

But four years on, Mel Nicholls believes she has a real chance of causing an upset and beating Cockroft in one of her three events in next month’s Rio Paralympic Games.

She told Disability News Service: “I have definitely got a chance.”

A silver medal in the 800 metres at last year’s world championships was a “great boost”, she said, coming as it did soon after an injury lay-off.

She’s world record-holder at 1,500 metres and loves the tactics of the longer races.

Nicholls (pictured) said: “I am much more of a distance racer, I am not a sprinter. It definitely goes in my favour.

“[The 800 metres] is still a short middle distance but you have got a good lap of time for some tactics, which I absolutely love. That’s my thing.

“I see it as like a game of chess. Once you’re into the rhythm you can kind of see it… I know where people are, I know what I can do, and you just play it out, and that makes it really exciting.

“With the 800, it’s almost anybody’s race. There are about five of us who can medal. I definitely want to be in that top five.”

London 2012 was her first major competition as a wheelchair athlete, and she took part just four years after the last of three strokes which left her disabled.

The build-up to Rio has been completely different to London, when she was “a complete unknown”.

She said: “I wasn’t on the radar [at London]. I am now. I put a lot of pressure on myself, but since London I’ve been on the team and it’s my job, so there is a lot of different pressure.

Nicholls describes herself as a “perfectionist”, both as a person and as an athlete.

She said: “There’s no harder taskmaster than I am on myself. You want to be the best you can be.

“Also, I don’t want to let my team down. I’m really part of the team. My coaches, the country, everybody that’s invested in me and the sport, I feel I owe them back.

She copes with the stress and pressure partly through support from a sports psychologist and mindfulness training, which she said has “probably been my biggest help in my training”.

The mindfulness proved crucial at last year’s world championships, she said, when she had only returned to training a month before, after an injury, and was lacking in confidence.

She said: “I got a silver medal and it was my mind that got me through that race. Your mind is powerful and you can do a lot with that.”

Like many Paralympians, she has had to make sacrifices. She hasn’t seen her mother, who lives in France, since last year.

“They understand that. It’s a short time and a small price to pay, I think. I know that they are there backing me and afterwards it will be worth it.”

She is looking forward to the “vibrance and the colour” of Rio – “I am a fan of bright colour, everyone knows me for always being in pink” – and to being part of a team environment again.

She said: “That was the main thing I noticed from London. I had never been in a team environment before and it felt like a big family.

“The people supporting you back home and the team around us, it was a big family, and everyone was there for the highs and the lows.”

She said that putting on the Rio 2016 ParalympicsGB team kit for the first time was “wonderful”.

She said: “Putting on the kit is something really special. I can imagine putting on a wedding dress, it’s that kind of experience… I will take this over getting married any day.”

She added: “We have this amazing crown design, which I absolutely love. It’s very regal. I love the royal family, I absolutely love the Queen, so I think it’s fantastic. If I could wear a crown to race, I would.”

Like many Paralympians, she is hoping to inspire the next generation of athletes, as she was inspired herself by watching the 2008 Beijing Paralympics.

She remembers joining Cockroft on her 200 metres lap of honour in London.

She said: “It was the children, their faces, and they all wanted to high-five you. You could see the magic in their eyes, and that was really special, and that was disabled children or able-bodied children.

“For me, if one person is going to take up sport, that’s such a positive, that’s what I want to do.”

Nicholls put her wish to inspire the next generation of Paralympic athletes into action five years ago by starting an academy with her coach, basing it at the Coventry Godiva Harriers athletics club.

There is now a core group of at least 10 athletes at every session, three times a week, and another 40 people who drop in and out; some of those who attend the sessions are amateurs and some of them professional athletes.

She said: “Some of the children do it because it’s a social thing, they have friends there, but they are getting better and better.

“The older guys want to come and get fit because they haven’t had the opportunity before.

“So we have Paralympic athletes training with everyone else; everyone just mixes in.

“It’s a social thing, it’s a confidence thing, a health thing and a competitive thing as well.”

One of those training with her at the academy is 15-year-old Kare Adenegan, who watched Nicholls and Cockroft race four years ago in London and made headlines last September after becoming the first athlete to beat Cockroft in her senior career.

Adenegan will be racing alongside and against both Nicholls and Cockroft in Rio.