You are here: Home / Activism and Campaigning / DAN returns to London streets with message that ‘disabled people are not disposable’ 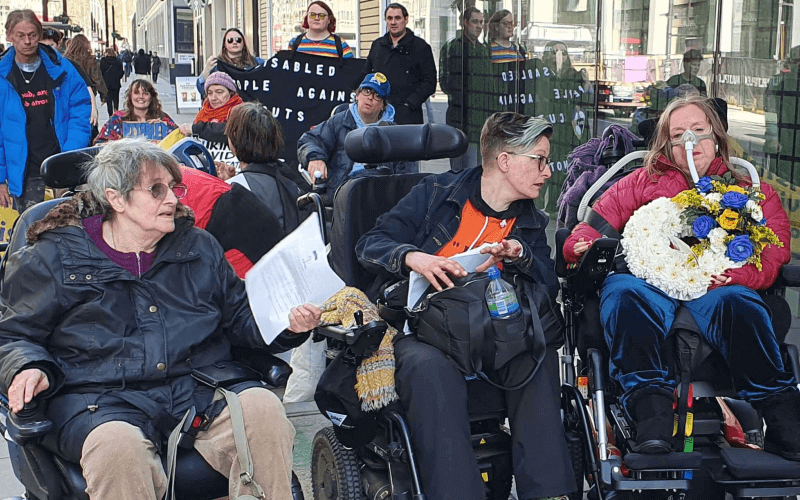 Members of the Disabled People’s Direct Action Network (DAN) were back on the streets on Friday, delivering demands to the government and protesting at the ongoing “hostile environment” facing disabled people, more than 10 years after their last demonstration.

At one stage, they were blocking all three entrances to the Department of Health and Social Care in central London as they called for a meeting with health and social care secretary Sajid Javid.

They laid a wreath in memory of the estimated 100,000-plus disabled people who died due to COVID-19, and the tens of thousands more they say lost their lives during the pandemic because of failings in the health and social care systems.

One of DAN’s demands, included in a letter handed to a member of DHSC staff, was for an independent inquiry into the deaths of people in care settings during the pandemic, as well as for a statement instructing all clinical commissioning groups not to impose “do not attempt resuscitation” notices on people without consent.

One DANNER, Simone Aspis, called outside the building for the government to “take responsibility for the deaths of disabled people”.

She said: “For all those people who are dying in these institutions, dying in assessment and treatment units, dying in psychiatric hospitals, dying in their own homes because they have not got enough support – we need to demand that inquiry, we need action right now.”

Among the key messages – and chants – was that disabled people “are not disposable”.

Other chants included “Do Not Resuscitate This Government” and standards from DAN’s 1990s heyday, such as “Free Our People Now” and “Rights Not Charity”.

Those taking part in the action included veteran DAN activists, younger disabled activists, including members of Disabled People Against Cuts (DPAC) and WinVisible, and allies.

Elsegood said the countless needless deaths during the pandemic, particularly those in residential institutions, were “giving out the message that the government thinks we are disposable, but we are here to say loud and proud that our lives are not disposable”.

She said: “They should be ashamed of how they have treated our community with such disregard. It’s shocking.”

And she said that, because those disabled people who lived in the community fared much better in the pandemic than those in institutions, it provided fuel for the call for “properly funded independent living in the community”.

Among DAN’s other demands to DHSC were for an end to all care charges; an action plan on independent living that sees an end to “mass care”; and a promise that “no local authority will force people into residential care”.

Holdsworth, who moved to the USA in 2004, told Disability News Service (DNS) on Friday that holding such actions was “a call to arms” and that DAN was likely to continue to work with DPAC on future demonstrations.

He said: “It’s about time we started organising again and getting out on the streets and kicking some arse.

“We used to have a saying 20 years ago that the only bad action is no action.

Brown, who was a member of both DAN and the earlier Campaign for Accessible Transport, said the protest had “made us feel we can get somewhere again”.

She said she had “felt so sick” when she learned that 60 per cent of those who died COVID-related deaths in England had been disabled people.

She said: “We have all actually lost friends, fellow DANNERS, loved ones, people I have spoken to today have lost their partners.”

But she also told DNS that she was protesting at how the government had gradually taken away disabled people’s “ability to pay for our own care and employ who we want to”, including through the decision to close the Independent Living Fund.

The action took place just three days before the long-awaited broadcast of Then Barbara Met Alan, a BBC2 fact-based drama which focuses on the relationship between Holdsworth and DAN co-founder Barbara Lisicki, and how they and fellow DANNERS fought for disability rights through direct action.

Among those at Friday’s action was Lisicki and Holdsworth’s kid Jasia, who attended many DAN actions as a child and brought along their own daughter.

They said: “I am so happy to bring my daughter. I grew up on demos.

“I hope the film can get some momentum because it’s a call to action. Now more than ever there needs to be some action.”

Saunders said: “We are here to make a difference and to say as disabled people that we are not disposable, our lives do matter.

Like Holdsworth, he focused much of his anger on the fight for a right to independent living.

He said he pays £100 a week in care charges, but only receives 12 hours of care.

Aspis said it was “like heaven” to be demonstrating again after the restrictions of the pandemic.

She said she was there to “show solidarity, get back out, get back to the activism. I am a disabled activist.

“It’s just really important for us to get back out there as a group.”

Among the allies who attended the action was 91-year-old writer, feminist and social activist Selma James, co-founder of the International Wages for Housework Campaign, which this year is celebrating its 50th anniversary.

She told DNS that “remembrance” was “an important part of our movement” and that “winning is power”, and “not only what you win then but what you point to as what you accomplished”.

“The people who started it, who had to make a breakthrough… that’s who we have to thank and remember.

“We don’t have much, but we would have had a lot less without what they did.”

Asked for her message to the government, she said: “I have no message that they will hear because their ears are full of money.”

Among the younger disabled activists who joined the action was Martha Foulds, who told DNS: “I am here because as a young disabled person I learned about DAN as I grew up and saw videos and pictures of people like Liz Carr chaining themselves to buses.

“I always felt pretty gutted that I didn’t get to be part of that.”

Her social care direct payments were cut “massively” during the pandemic “as a reminder that disabled people’s equality is tied to profit in every way possible and I have had enough of it”.

And she said it was “really important” that disabled and trans activists worked together, adding: “We are all fighting for bodily autonomy, against medicalisation and for freedom from discrimination.”

Another young disabled activist, Julia Robbins, said she had studied history at university and had learned about both DAN and DPAC, and was “just so excited that DAN is reviving itself”.

She said the pandemic had shown disabled people like her that “your life seems to be disposable to everybody else”, while calls for “herd immunity” and “living with the virus” were just “eugenics” by another name.

Asked for her message to the government, she said: “It isn’t that hard to give disabled people human rights and a proper living wage.”

Another young disabled activist, blogger, writer and film-maker Matthew Goodsell, said he had come to the demonstration out of curiosity as it was “the first DAN action in quite some time and I was interested to see how the movement is developing”.

But he said he was also driven by loathing of the current government.

He said: “Care charges [are] rising and their cuts are undoing the small progress we had made towards equality.”

DHSC had failed to comment on the demonstration and DAN’s list of demands by noon today (Thursday).

Aspis said she believed her last DAN action had been a protest in October 2002 at the Renaissance Hotel in Manchester, where the charity Leonard Cheshire had been hosting a ball to raise funds to build a new institution.

She and others had thrown stink bombs that caused the event to be abandoned.

Saunders said it was “surreal but lovely” to see that disabled people were “still here, still campaigning and still protesting about disabled people’s rights”, although many DANNERS had sadly died in the last 20 years.

He spoke about why DAN had been founded.

He said: “For years and years and years we had been going to council meetings and talking to politicians and [organising] petitions and [this led to] absolutely nothing, and we decided as a group that we were going to go out and kick some arse – non-violent civil disobedience. And we did.”