You are here: Home / Activism and Campaigning / Deaf activists on 200-mile trek to bring ‘Where’s the Interpreter?’ message to ‘callous’ PM 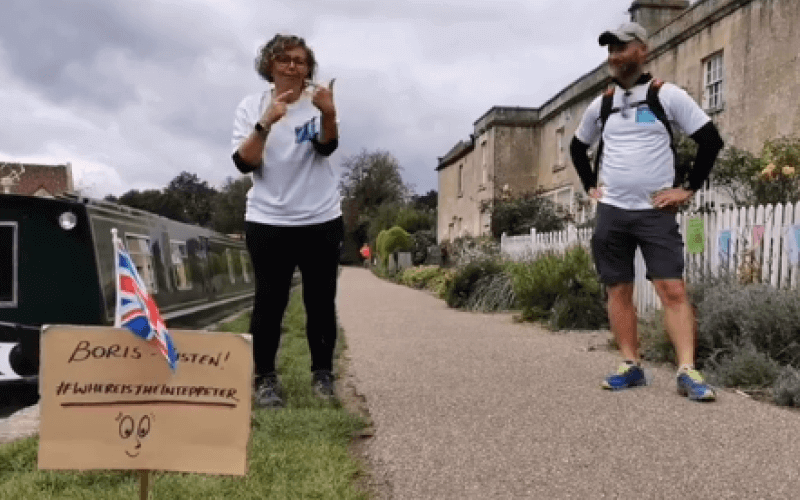 A Deaf activist is walking from Gloucester to Downing Street to draw attention to the government’s “callous and heartless” refusal to provide a British Sign Language (BSL) interpreter at its coronavirus TV briefings.

They set off on Saturday from the offices of Gloucester Deaf Association and have already passed through Bristol and Bath, and will travel through Reading, Maidenhead and Richmond, before reaching Downing Street next Friday (16 October).

They are raising funds for a potential judicial review of the government’s refusal to provide an interpreter at the briefings, which they say has breached the Equality Act, the Human Rights Act and the UN disability convention.

The legal action, led by discrimination law experts Fry Law, could also look at the government’s failure to provide COVID-related advice in BSL on its website.

Stewart-Taylor, a consultant, writer and researcher from Bristol, told Disability News Service yesterday: “We have spent six months trying to negotiate with the government and being fobbed off.

“The risk to Deaf people’s health is too great to delay any longer.

“Only a callous and heartless government would push Deaf people to the point of having to sue them for their rights under the Equality Act of 2010.”

She said Deaf people in England were asking: “Why does this government continue to ignore our demands for equal access to information about COVID-19?”

She said the daily briefings during the early months of the pandemic had been “crucial in helping people understand what is happening, and thus minimising illness or death.

“For us Deaf people, when we sat down to watch the news, we were shocked to see that there was no interpreter provided (whether next to [the prime minister] or in-vision).

“Imagine, at the time of crisis, no access to information, seeing public panicking, seeing the news flashes on TV, newspapers, Deaf people were unable to access local services because it was closed – how does that make Deaf people feel?

“It is not only the lives of Deaf people. It is also our friends, our families, our employees, our colleagues – if we do not know how to adequately safeguard against the virus, we may be accelerating its spread unknowingly.”

She said Deaf people had been left scared, confused, excluded and panicked.

After high-profile complaints about this exclusion, she said, the government left it up to individual broadcasters to ensure access to BSL-interpreted versions of the briefings through an interpreter provided on the BBC News digital channel.

Stewart-Taylor said this was a flawed solution, partly because many people were not aware of this service, including older Deaf people without access to social media, those living isolated lives, or those living in residential homes or in other shared housing.

She said: “The duty to ensure that all information released by the prime minister’s office is accessible lies with the government, not media broadcasters.

She added: “Deaf people have been telling me that the government’s refusal sends a message to them to say, ‘We don’t care if you Deaf people live or die.’

“This is really impacting their mental health and wellbeing.

“Enough is enough, so that’s why I’m walking to London.”

A parallel legal action, also led by Fry Law, is seeking damages from the government for breaching the Equality Act by failing to provide an interpreter for nine separate daily briefings by prime minister Boris Johnson at the beginning of the pandemic crisis, between 3 and 19 March.

These nine briefings took place before the BBC provided an interpreter for COVID-19 briefings on its BBC News channel.

These first few televised briefings provided vital information to the public, including informing them that they should avoid pubs and restaurants, that schools were closing, and advising them how to protect themselves from the virus.

Nearly 300 Deaf people have signed up for this legal action, with protection from the costs they could face if they lose provided through a new insurance policy being pioneered by Fry Law.

The government is set to begin holding daily televised COVID-19 briefings again this month, but there has been no suggestion that it will offer an interpreter alongside ministers.

Deaf campaigners and allies highlight the contrast with other countries, including the devolved Welsh, Scottish and Northern Ireland governments, and Norway, France, Japan, Italy and New Zealand, which have all been able to provide BSL interpreters for their COVID briefings.

A government spokesperson said: “We are committed to supporting disabled people through every stage of this pandemic and have established BSL interpretation at the No 10 press conference via the BBC News channel and iPlayer, available on all TV packages as part of Freeview.

“The BBC has also made their video feed for the BSL interpreter available to all other broadcasters and for use on No 10 social channels.

“We continue to work across government to ensure that information and guidance is fully accessible.”