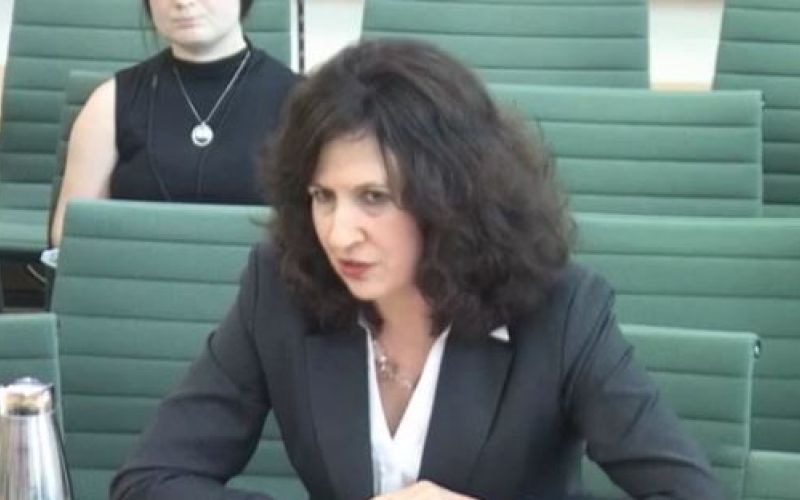 The government must do more to research the benefits of disabled people finding work, according to a former diplomat who was forced to quit after the Foreign Office refused to fund the lip-speakers she needed to do her job.

Jane Cordell was giving evidence to the Commons work and pensions committee as part of its inquiry into the government’s pledge to halve the disability employment gap (the difference between the employment rates of disabled and non-disabled people).

Five years ago, Cordell (pictured giving evidence), who became profoundly deaf as a young woman, lost her employment tribunal appeal in a disability discrimination case against the Foreign Office over the cost of providing her with lip-speakers.

She had been offered the job of deputy ambassador to Kazakhstan and Kyrgystan, but the offer was withdrawn because the government said the cost of providing lip-speakers would be too high (estimates varied from less than £200,000 to more than £300,000 a year).

Cordell, now a director of the coaching and training company Result CIC, told the committee this week that the government should do more to collect evidence of successes, of disabled people “who are in work, people who have done well”, and create a database of “inspiring stories”.

She said that a cross-departmental evidence base should look at not just the costs of supporting disabled people into work but also the benefits, and added: “I don’t feel like a cost, I feel like a capable woman who happened to become deaf.

“I have coached 200 deaf and disabled people who have gone on to get work themselves and to be able to support their families, etc. That kind of evidence is needed.”

She said the committee’s “over-arching” priority should be to “get clear about what is a reasonable adjustment”, and she joked that her own case “did not really help to clarify that”.

And she called for guidance on reasonable adjustments that was “straightforward, accessible, positive and clear for employers”.

Cordell said that becoming disabled was “tough” and so people who acquired an impairment can “rise to the challenge” and often gain new skills, such as persistence, time management, resilience and people skills.

She said: “I am not being Pollyanna-ish; it is true, I have worked with those people.”

Tory MP Heidi Allen, a member of the committee, was critical of her own government’s Disability Confident scheme, which was launched three years ago by the prime minister, David Cameron, and has since come in for repeated criticism from disabled campaigners, managing to sign up just 40 mainstream private sector partners in its first three years.

Allen said she was not convinced that the scheme “does very much”, and asked Cordell whether the Disability Confident events that many MPs have been hosting in their own constituencies could be developed to make them more useful.

Cordell suggested that they could become more of a “networking” type of event, giving disabled people the chance to sell themselves to potential employers.

Allen said this made sense because the current model promoted by the disabled people’s minister Justin Tomlinson of having “reverse job fairs” saw employers meet with organisations such as Jobcentre Plus and Remploy for advice about how to be more “confident” about taking on disabled employees, while not involving disabled job-seekers themselves.

Cordell said that anything that encouraged the two sides – employers and disabled job-seekers – to be “less fearful” of each other was worth trying.

Liz Sayce, chief executive of Disability Rights UK, told the committee that about 300,000 people leave work every year because of a health condition – and many of them do not want to or need to – often because nobody knows what adjustments could be made in the workplace to allow them to continue.

She said this was “a terrible waste to the employer and the economy”, and suggested that the government could consider a legal obligation on employers to keep a job open for at least 12 months if an employee becomes ill or disabled.

And she said that a key improvement would be for the government to be able to provide instant advice to employers when an employee acquires an impairment.

She said: “What employers need is advice at the point that they need it. If government could offer bespoke advice… that would make a massive difference.”

Among other suggestions for a cost-effective government strategy, Sayce called for more emphasis on the benefits of peer support; for Access to Work to be used to fund paid cover for people with fluctuating conditions when they were not well enough to work; for a “much more personalised service” for unemployed disabled people; and for more involvement of disabled people and disabled people’s organisations in planning future employment support.

She also called for less government emphasis on sanctions and compulsion.

Sayce said that many disabled people on benefits were left “scared” by the current element of compulsion in their support, and added: “It has become such a topic of fear that people are not in the mood for taking a risk and trying something new.”

She said that if the future “carrot-stick balance was very weighted towards the stick”, some disability organisations would not want to be involved in the government’s plans, and so it would be good to come up with something that disability organisations “could sign up to that has got high expectations but is evidence-based in what will motivate people”.

Mike Adams, chief executive of the Essex disabled people’s organisation ecdp, said the government needed to target its strategy more towards smaller companies rather than the large “corporates”.

He also said that there was still a “huge anxiety” around “etiquette and how to approach a disabled person”.

He said: “On the side of disabled people, I do believe there is a perception, particularly if you have a hidden impairment, that disclosure is still an issue and there is a fear that the more you disclose the more likely you won’t get a job.”

And he said the issues for SMEs were often around “how do I retain staff who acquire an impairment while working for me?”

He added: “It’s incredible in this day and age, the amount of information that is accessible at the touch of a button but simply how many people and businesses are not aware of that information.”

Meanwhile, the latest figures – according to a briefing note published by the House of Commons library – show that the disability employment gap has actually risen since the 2015 election, despite the government’s manifesto commitment to halve it.

This is because the levels and rates of employment for both disabled and non-disabled people have been increasing since 2013.