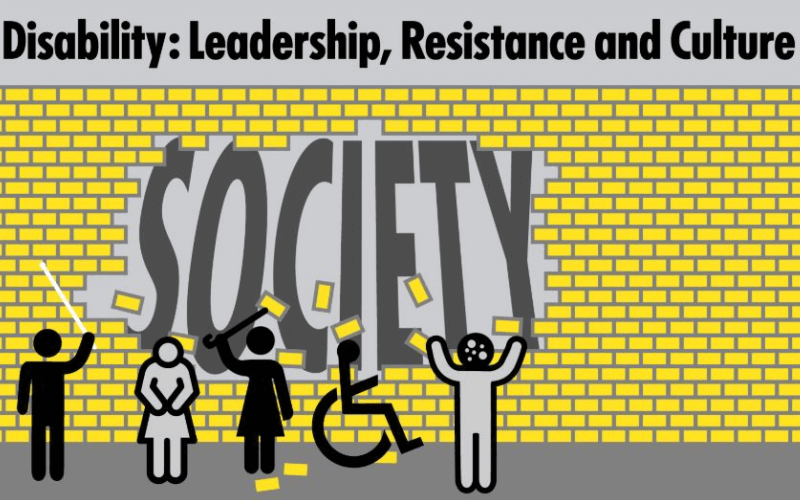 Two leading disabled campaigners have delivered stark messages about the impact of a decade of austerity on disabled people, including the deaths of countless benefit claimants and the “unprecedented” loss of user-led organisations.

Professor Peter Beresford, co-chair of Shaping Our Lives, and Richard Rieser, founder and coordinator of Disability History Month (DHM), were speaking at DHM’s launch event in central London on Monday.

This year’s DHM, the 10th annual celebration of disabled people’s history and culture, is focusing on disabled leaders and resistance.

Beresford told the event that organisations led by disabled people and service-users, and mental health survivor organisations, were “under threat as never before” and closing “at an unprecedented rate”.

He said: “The Minds and Rethinks cosy up to government and accept their regressive policies, yet say they speak for us, and our own organisations and initiatives are increasingly being made insecure, closing and lost.

“Our voices are being taken from us, our chances for resistance and change closed off.

“We must fight together to resist this, we must make this a public issue, we must band together.”

He said he was proud to be involved in both the mental health service-user/survivor movement and the broader disabled people’s movement, and said that it was important to build the links between the two movements because of the “shared discrimination and oppression that we have faced”.

But he said it was not possible to address discrimination and the devaluing of disabled people in society “without addressing the appalling consequences of so-called welfare reform”.

He said this had affected all disabled people but had hit survivors of the mental health system “in a particular way and [had driven] many to think of killing themselves, and too many to actually do so”.

Beresford also said that the emergence of the “mad studies movement” had provided the survivor movement with its own expression of the social model of disability and the philosophy of independent living.

He said: “We have stood the medical model of mental illness on its head, we have rejected it and all its biomedical and genetic trappings. Instead, we are highlighting the social oppression and exclusions that we face.

“We have taken over the language of madness that has so long been used to oppress us.”

He said this felt like “a break with the medicalised past” and the reliance on “sledgehammer drugs” and pressure to “force us into any paid work, however damaging it may be” and the emphasis on control, compulsion, coercion and institutionalisation.

Rieser told the event that there was a “wall” between disabled people and the rest of society.

He said: “That wall is what we are about in Disability History Month, looking at the lessons of the past and how people have challenged it, where we are now, what we need to do in the future to get rid of that wall.”

He compared the events that took place in Nazi Germany – which, under Hitler’s Aktion T4 programme, led to the murder of as many as 275,000 disabled people – with the impact of austerity on disabled people.

He said the Nazis’ view of disabled people as a “burden” was on a par with the events of the last decade, which have seen countless deaths due to austerity cuts.

He said: “Where’s the difference from actually setting up camps to do it or allowing people to die by withdrawing their benefits?

“There’s not that huge gap and there should be. In a civilised society it should not be allowed to happen.”

He said the UK was a rich country and yet treats disabled people “like rubbish”.

Rieser also said that many disabled people, because of their personal struggles, had “come forward as leaders”, even before the start of the disabled people’s movement, through a “determination… that there needed to be social justice, not just for themselves, but for wider society”.

Baroness [Jane] Campbell, the crossbench peer, independent living campaigner and co-founder of Not Dead Yet UK, told the event: “No one person can claim that they were or are the leader at any time in our history.

“The success of our movement is because we are a connected enterprise.”

She spoke of how she first became involved in the disabled people’s movement in the 1980s after attending a conference of the British Council of Organisations of Disabled People (BCODP).

At that conference, she heard Mike Oliver – who died earlier this year – speak about disability pride, the social model of disability, exclusion and disabled people’s emancipation.

She said: “I was completely captivated… in 15 minutes, he unblocked a world for me that offered so much more than I ever imagined possible.”

She described the various stages that the disabled people’s liberation movement had had to go through in the UK, and said that it was the latest stage – being included in mainstream society – that had proved to be the most difficult.

She said: “This has been our hardest step, which we are still fighting and losing in equal measure now today.”

For this year’s Disability History Month – the 10th since its launch in 2010 – nine interviews have been filmed with present-day disabled leaders, including Baroness Campbell, Professor Beresford, Jaysaree Kalathil and Micheline Mason, on the subject of leadership and resistance (pictured).

Gary Bourlet, co-founder of Britain’s first People First group in 1984, spoke at Monday’s launch event about the early days of the self-advocacy movement in this country, and how he had had to use his benefits to buy envelopes and stamps to send more than 400 hand-written letters to promote the idea of People First.

He said: “There was resentment in those early days from providers and families.

“They weren’t used to people with learning disabilities speaking up in the 80s.

“People with learning disabilities themselves weren’t used to the idea. They didn’t have the confidence.

“We just had to keep spreading the word and holding conferences.”

Bourlet, now membership and engagement lead for Learning Disability England, said: “Self-advocacy, to me, is about speaking up for yourself, deciding what you want to do, now and in the future, and understanding your strengths and weaknesses and developing personal goals and standing up for your rights, making decisions instead of others making decisions for you.”

She said: “It was important to me when I came into the disabled people’s movement that I was able to identify with other black disabled leaders.”

She chose the nineteenth century author and abolitionist Mary Prince; Barbara Stewart, a poet, artist and disabled activist who worked in east London on hate crime and volunteered as a benefits adviser; and Nasa Begum and Millie Hill, who wrote about the importance of intersectionality.

Daley said: “Nasa and Millie [wanted people to understand] that change for disabled black people is unlikely to be achieved in a meaningful way while there remains inter-sectional oppression.”

Actor and activist Ellen Goodey spoke of the schools and college that had supported her through a mainstream education and of how she co-wrote, co-produced and co-directed Princess of the Graveyard Palace, a play about the history of people with learning difficulties, which examines issues such as pre-natal testing, abortion and eugenics.

Judy Hunt, the author of No Limits: The Disabled People’s Movement, A Radical History, spoke about her late husband Paul, who played a significant role in the development of the movement.

She described how he had been living in the Leonard Cheshire residential home Le Court, in Hampshire, in the early 1960s, and had embarked on a political journey which would lead to the formation of the Union of the Physically Impaired Against Segregation (UPIAS) 10 years later.

In his journal, he described the autocratic and patronising behaviour of the warden and matron, the management committee, the trustees and Leonard Cheshire himself, and how residents struggled to respond to that.

He believed the residents had to win representation on the home’s management committee “to be both heard and respected”.

She said: “Paul and a few others were also battling against the constant attempts by Cheshire and others to treat them as the passive, chronic sick dependants of charity.”

Louise Regan, membership and equality officer for the National Education Union, which hosted the DHM launch, told the event that the education system was “going backwards” on inclusion as a result of austerity.