You are here: Home / Activism and Campaigning / New ‘radical history’ of disabled people’s movement ‘has lessons for today’ 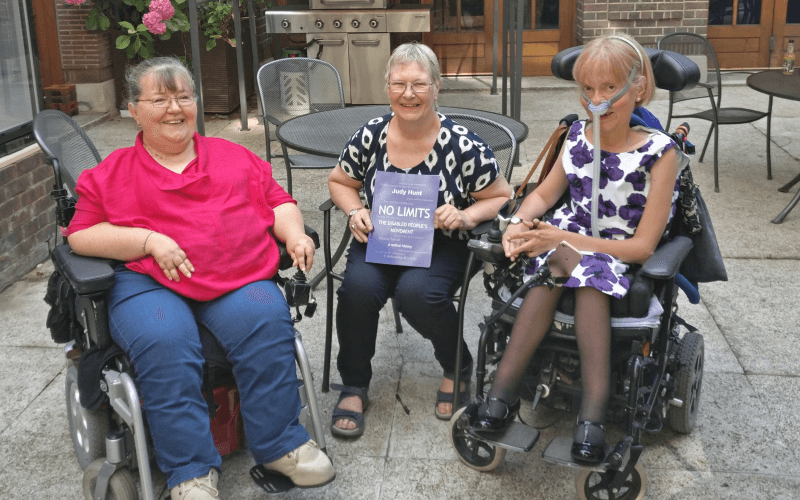 A new “radical history” of the disabled people’s movement is set to throw new light on the contribution made by one of its most influential figures.

The launch of No Limits: The Disabled People’s Movement, A Radical History, took place last Friday (12 July), and was attended by its author, Judy Hunt, on the 40th anniversary of the death of her husband, Paul.

It was Paul Hunt’s letter to the Guardian in 1972 which led to the formation of the Union of the Physically Impaired Against Segregation (UPIAS), which itself was to play a crucial role in the development of the movement and what was later known as the social model of disability.

Hunt had originally lived in the Leonard Cheshire residential home Le Court, in Hampshire, where he and other residents rebelled repeatedly against the regime, before he left to marry Judy in 1970.

In the Guardian letter, he wrote of how disabled people with high support needs were forced into “isolated unsuitable institutions where their views are ignored and they are subject to authoritarian and often cruel regimes”.

He proposed a new “consumer group” that would “put forward nationally the views of actual and potential residents of these successors to the Workhouse”.

No Limits tells how a series of “historic conflicts” between disabled people – including Paul Hunt – and service-providers in the 1960s laid “important groundwork for the emergence of a widespread social movement to end the segregation and second class citizenship of disabled people”.

It describes how the development of a social model of disability – including the key roles played by Hunt and fellow UPIAS founder Vic Finkelstein – led to a “heightened determination by disabled people to achieve emancipation from the oppressive social conditions in the UK”.

The book also describes how institutions began to be replaced with independent living settings, and it follows the evolution of the disabled people’s movement from the 1950s to the present day.

It also aims to “contribute to the ongoing struggle disabled people now face to maintain some control of their lives” after years of austerity have “battered many of the gains made through past campaigns”.

At the launch event in London last week, Judy Hunt said: “I hope the book will show how in the beginning when people were very oppressed, very cut off from society, that despite that, some people managed to find a way to struggle back, and they developed something powerful through the power of collective action which was terribly important.

“I’m hoping that by drawing on the lessons of before it may still provide some hope for people, some ideas they can build on.”

She said that her husband had been “an amazing and a lovely person” who was “looked to by many for his very caring support and his guidance” and had “worked tirelessly and like there was no tomorrow, literally”.

She said: “He had been given a very short life expectancy when he was young. He lived that life of urgency all his life.”

She spoke of how her husband edited a book of essays by disabled people – Stigma: The Experience Of Disability – which was published in 1966, but is now out of print.

In his contribution to Stigma, he wrote about how disabled people were an oppressed minority, which she said was “the first time really that that word was used in the context of disability”.

She said: “It was like he lobbed a very weighty stone into the pond and it set off ripples which kept getting bigger and bigger.”

An archive of UPIAS material has been deposited by Judy Hunt in Manchester Central Library, alongside other historic documents that cast light on the birth, growth and impact of the movement, which have been collated by Greater Manchester Coalition of Disabled People (GMCDP).

Sian Vasey, a member of UPIAS in the 1970s, told the launch event that Judy Hunt’s book was “very important”, with its discussion of the “extraordinary revolution” of viewing disabled people as an oppressed minority.

She said that disabled people were still oppressed today, for example through the “really scary” dismantling of support systems, such as the cuts to care packages.

Asked whether disabled people were still oppressed, she said: “Yes, I think we are, as women are, as black people are. I don’t see any difference.”

She spoke of how reading Paul Hunt’s letter to the Guardian, years later, as a young disabled woman, led her to contact the Spinal Injuries Association and then to attend the second annual meeting of the British Council of Organisations of Disabled People (BCODP).

It was at this conference in the early 1980s that she heard disabled activists Mike Oliver and Ken Davis talk about the social model of disability and the concept of independent living.

She remembers “feeling goose bumps all over my body” as “suddenly everything just fell into place”.

She told last week’s launch event: “If I hadn’t read that letter and I hadn’t phoned the Spinal Injuries Association, I would probably not have gone down the road that I did.

“That is why today is so, so important to me.

“Paul, even though I never knew him, was probably one of the most important men in my life, which is a very strange thing to say about someone you never knew.”

She told DNS afterwards that disabled people are still an oppressed group, but that she “would never say we are more oppressed than other groups that have had very similar struggles to stay alive and be treated equally”.

She said: “Becoming liberated through understanding the nature of their oppression is one of the most important things a disabled person can do.”

She said she had struggled more trying to be “normal” and fit in to a “normal world” than she ever did after she was liberated.

Free copies of the book in pdf format are available through the GMCDP website, with other formats available soon. To order a paperback version at £19.99, email: [email protected]