You are here: Home / Activism and Campaigning / Disabled activists are prepared for prison after clampdown on right to protest 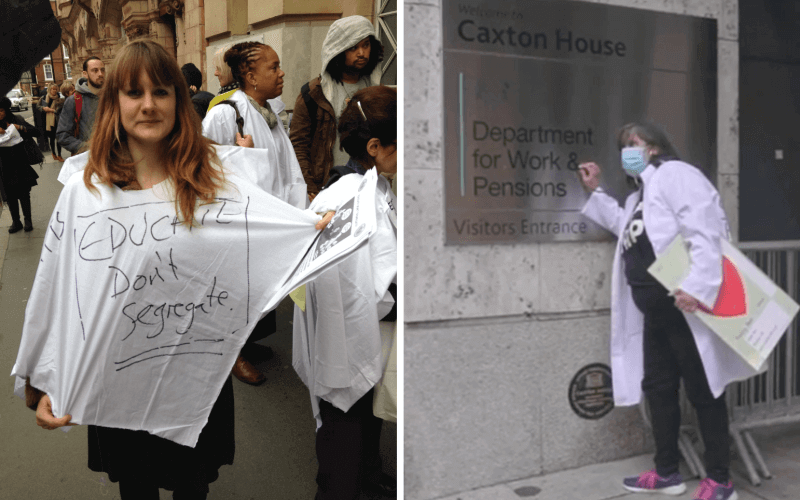 Disabled activists have said they are prepared to break the law, and even go to prison, if the government succeeds in bringing in new legislation that will crack down on the right to protest.

Dolly Sen and Ellen Clifford were speaking at the online launch of Sen’s new documentary, Broken Hearts for the DWP, which exposes the role of the Department for Work and Pensions (DWP) in countless deaths of benefit claimants over the last decade.

Sen told those at the launch that she was “expecting to go to jail” for her fight against injustice, due to changes being introduced by the government through the police, crime, sentencing and courts bill that she said would have a worrying impact on the right to protest.

She said: “I do have plans to protest and resist the policing bill.

Clifford, a member of the national steering group of Disabled People Against Cuts (DPAC), said the bill was one of the ways the government was finding to shut down disabled people’s attempts to protest its actions, which also include its attacks on the use of judicial reviews to over-rule ministers’ decisions.

Clifford said: “Judicial review has been one of the only tools where we have managed to get wins against the government over the last 10 years.”

She said the clampdown on judicial reviews was linked to the criminalisation of protest.

She said: “Every way we are successfully using, they are shutting down.

“We know from history that the only way to achieve fundamental change is from the grassroots up, when we all collectivise and we forcefully demand the change that we want to see.

“Unfortunately, there aren’t any easy or comfortable ways to do that, and I just think we absolutely cannot be afraid of criminalisation. We have to take it on as our next battle.”

She told Disability News Service (DNS) after the launch that disabled activists “have to not be afraid to risk prison, we have to protest and go to prison to get our voices heard.

“We can’t look for ways around it – softer options that might be more comfortable and convenient for us, but which will fail to get our message across or to raise awareness sufficiently, and most importantly present a challenge to those in power.

“Rights are being taken away rapidly from the entire working class, with disabled people at the sharp end.

“Those rights will never be given back without active struggle.

“It was only active struggle and sacrifices that won them in the first place.”

Clifford had told the launch: “There are people [in the disability sector] who think that the way that you engage and influence the government is to be reasonable.

“But you don’t. First of all, if they don’t want to listen, they are not going to listen however you put across your evidence.

“But also [the government] are unreasonable, they are violent, they create injustice, they have created a system that is deliberately designed to push people into poverty because our lives are worth less to them than other people’s.

“It’s right that we meet them with a level of anger that is completely justified.”

As part of her new film, Sen held two actions outside DWP’s offices in Whitehall.

In one of them, she and other campaigners – including Joy Dove, the mother of Jodey Whiting – held up heart-shaped boards, on which had been written the names of four disabled men and women who had lost their lives because of DWP’s benefits assessment regime.

In the second action, Sen attempted to “section” DWP for being a danger to benefit claimants.

Sen, a writer, performer, activist, artist and film-maker, told the launch event: “People say, ‘What’s the point of doing this if you change nothing?’ but even if you do change nothing – and I hope I do change things – I am offering in this film evidence of what has happened to human beings.”

Paula Peters, another DPAC steering group member, who took part in Sen’s film, told the launch about two of her friends who took their own lives – because of DWP reforms – in the years following the Labour government’s introduction of the work capability assessment system in 2008.

She said: “Protests like this are so massively important to make visually aware what’s going on but also to raise awareness of the wider public who are still completely unaware of the devastating consequences policies like this are having on disabled people’s lives and people in mental distress.”

“It’s deliberately, intentionally cruel, to wear us down, to stop us claiming, and their attitude is the more of us who die the better, but what is important is we are living witness to what they are doing, via the artwork, via the films, via the photography.

“The truth will fully be known in time and history will judge them for what they have done to us.”

More than 100 people attended the online launch, one of the events planned to introduce Deaths by Welfare, a project from Healing Justice London (HJL), which works with marginalised communities.

The project, co-designed by members of HJL’s user-led Litany for Survival group and led by researcher and lecturer Dr China Mills, is building an evidence base for the links between welfare reform and people’s deaths.

A core part of the project is to co-produce a timeline that documents evidence of the cumulative harm caused by DWP, and the actions of the disabled activists and bereaved families who have fought its fatal reforms*.

The timeline is likely to be launched through a new website in February or March 2022.

Mills told the launch event that DWP has claimed that it does “not accept the argument of those who seek to politicise people’s deaths by linking them inaccurately to welfare policy”.

But she said that the Deaths by Welfare project sees all welfare reform-related deaths as “political”.

She said the timeline was “a story of pervasive, cumulative devastation” but also of “unrelenting, incredibly creative resistance” by disabled activists and bereaved families.

*DNS editor John Pring is co-creator of the timeline, alongside Mills and welfare rights expert Nick Dilworth, with input from Clifford, Sen, disabled activist Rick Burgess and others