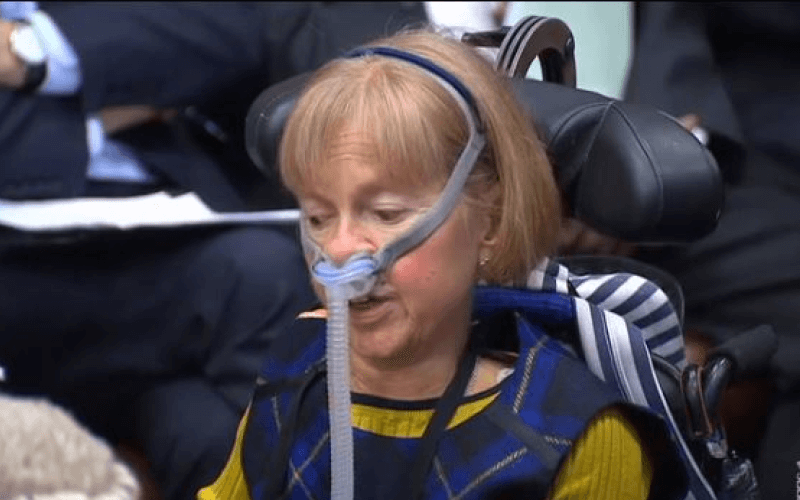 A disabled crossbench peer has called on the government to start handing out “heavy fines” to the air travel industry when it fails to ensure that its services are accessible to disabled passengers.

Baroness [Jane] Campbell asked the government on Monday what action it was taking to encourage all UK airports to provide appropriate facilities for disabled people.

Another disabled peer described how she was left in tears after being dumped in a corner facing a concrete wall while airport staff tried to find her wheelchair.

Baroness Campbell (pictured) pointed to the Civil Aviation Authority’s (CAA) third annual report into the assistance provided at the UK’s biggest airports, which said that one in 10 of those surveyed had described the quality of assistance provided in 2017-18 as “very poor”.

“In the light of this, can the minister assure the house that the government’s aviation strategy will contain more stringent ways to address this outrageous discrimination with more than just guidance and regulations that we know do not work?

“Will she also tell me how many disabled people were involved in developing the strategy?”

Baroness Sugg, the junior transport minister, failed to say how many disabled people were involved in the strategy, but she said it was due to be published “in the coming weeks”, and promised that it would address these issues.

She said the CAA survey results were “obviously not good enough”.

She added: “The green paper will propose a passenger charter, which will clarify what can be expected from airlines, airports and airside services, including on wheelchair damage and waiting times, and will improve the standards of service for passengers with reduced mobility.”

Within three hours of asking her questions, Baroness Campbell had been contacted by the Airport Operators Association, seeking a meeting to discuss the issues she had raised.

She said on Twitter: “Is a ‘government charter’ enough? Surely it’s time to enforce the regulations with heavy fines?”

Another disabled peer, the Liberal Democrat president, Baroness [Sal] Brinton, told the minister how when she arrived on a flight from Heathrow to Madrid last month she was told her wheelchair was missing.

She said: “I was then passed from pillar to post and was dumped in a corner facing a concrete wall by staff who were trying to sort out what was going on.

“I ended up in tears while they tried to find my wheelchair.

“If this were an unusual occurrence, it would be horrific, but it is not.

“What is even more horrific is that this happens every day to air passengers.

“Charters butter no parsnips: when will the regulations be enforced to stop air travel being a ghetto for disabled people?”

Baroness Sugg told her: “She is absolutely right that these occurrences happen far too often, and that is what we need to change.

“Today is the United Nations International Day of Persons with Disabilities, and it is important that we as a country continue to work with international forums to promote greater accessibility to air travel for those with reduced mobility.”

She said the government was “working closely with the aviation industry, the CAA, wheelchair manufacturers and disability organisations to achieve the long-term goal of enabling wheelchair-users to travel with their own airworthy wheelchair on a plane”.

Following the questions she asked in the Lords, Baroness Campbell was contacted on Twitter by a string of other disabled people sharing their own experiences of airport and airline inaccessibility and discriminatory attitudes.

One fellow disabled peer, Baroness [Tanni] Grey-Thompson, told her: “I’ve had the pilot tell the plane that we’re leaving late because of ‘having to board a wheelchair’.

“Thanks. Actually I was there early. It was the assistance team that wasn’t.”

Another to share her experience was Sophie Christiansen, the eight-time Paralympic gold-medallist, who shared an experience from last week.

She described how she arrived at an airport at the end of a flight, and said: “Every time recently I’ve had to ask someone for my chair back as they’ve been sitting in it. This is like a stranger wearing your shoes.”

And Anna Severwright, co-chair of the Coalition for Collaborative Care, told Baroness Campbell: “Let’s hope they are willing to listen and change.

“Both my experiences of flying with my electric wheelchair were negative and very stressful. Puts me off wanting to fly. Thanks for trying to improve things.”