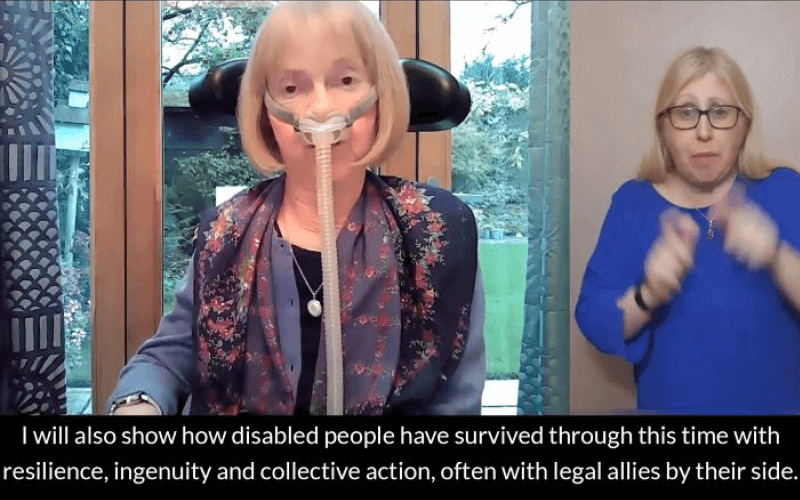 Disabled people’s equality and human rights have been “deeply undermined” during the COVID-19 pandemic, a disabled activist and peer has told an annual lecture.

But Baroness [Jane] Campbell also told the online audience for the annual Caroline Gooding Memorial Lecture that disabled people had survived the pandemic with “resilience, ingenuity and collective action”.

She said she had been left “bewildered, astonished and terrified” by the pace of change to disability and wider civil rights, because of the pandemic, Brexit and other cuts and reforms in recent years.

And she said the rights of disabled people had become “very easy targets” for the government in the era of austerity.

The annual lecture was set up as a memorial to the disabled lawyer and activist Caroline Gooding, who played a leading role in bringing about the Disability Discrimination Act, and in then securing improvements to disability rights legislation.

Gooding was director of legislative change at the Disability Rights Commission throughout its eight years. She died in July 2014.

Baroness Campbell (pictured) told the audience how the UK government had ignored guidance published in April by the UN’s Office of the High Commissioner for Human Rights on how to protect disabled people’s rights during the pandemic .

Instead, the government spoke of protecting “the vulnerable” and the NHS and stressed that most deaths were among people with underlying health conditions.

Baroness Campbell highlighted Office for National Statistics figures which showed that disabled people had made up at least three-fifths of COVID-related deaths in England and Wales.

And she said the “shocking” death rates of people with learning difficulties – those aged 18-34 are 30 times more likely to die than non-disabled people in the same age group – showed that measures to minimise the risk to them had been “ignored in national contingency planning with devastating effect”.

And instead of taking note of the UN advice to engage disabled people in its COVID-19 response, she said, the UK government had put “the vulnerables” on a shielding list, sent them guidance “without any means to follow it” and ensured they became passive, “othered” and “victims”, instead of treating them as “actively involved citizens”.

Personal assistants were left with no personal protective equipment, sourcing food became a challenge for millions of disabled people, and support was cut, leaving disabled people’s lives “in great danger”, while the situation for those in care homes was “even more treacherous”.

She told the audience: “This was not a human rights response to the government’s duty of care to its so-called ‘vulnerable citizens’.

“One began to feel there was little difference between being labelled ‘the vulnerable’ and ‘the expendable’.”

She also highlighted the widespread experiences of disabled people asked to agree to have a “do not attempt resuscitation” note placed on their medical records, and the use of an NHS-branded “COVID-19 decision support tool” that suggested that “frailty” scores would be used to enable doctors to decide whether a patient should be treated in intensive care.

But she said that disabled people had fought back and had gone “into overdrive”, through their campaigning networks, organisations and social media.

This included drawing up a statement signed by 160 disability organisations which reminded the government of its duty to “uphold the equality and human rights of disabled people”, and which led to a statement endorsing those principles from senior NHS figures.

It also led to NHS England setting up a working group, involving disabled people, that drew up a set of principles to guide clinicians on how older and disabled people should be treated during the pandemic.

She told the online audience: “This campaign… demonstrates the power of disabled people’s self-advocacy and our ability to challenge, with the support of allies, potential grave violations of the Equality Act and the Human Rights Act.

“The right to NHS treatment and, in essence, the right to life itself, was, in the early months, a small but significant achievement.”

She pointed to other ways in which disabled people have fought back during the pandemic, including the Deaf-led campaign demanding a British Sign Language interpreter for the government’s pandemic television briefings, and the campaign to persuade the government to switch off the Care Act “easement powers” that had been introduced through the Coronavirus Act.

Baroness Campbell told the audience that the examples she had given were “just a few examples of disabled people and their allies demonstrating astounding resilience in the face of both the virus and social injustice.

“Many haven’t survived, but we are surviving, as a movement, despite enormous barriers to our inclusion.

“Despite the threat from a deadly virus and despite an assault on our fundamental disability rights, disabled people have not been passive victims throughout this pandemic, and we won’t be in the future.

“Along with our allies, we have organised and fought from the very beginning of the pandemic.

“However, we are still at great risk. Our fundamental rights to live with dignity, respect and equality have been deeply undermined.”

The lecture was sponsored by the School of Law at the University of Leeds and co-hosted by the university’s Centre for Disability Studies and Centre for Law and Social Justice.