You are here: Home / Human Rights / Disabled people in Wales have final chance to give UN testimony 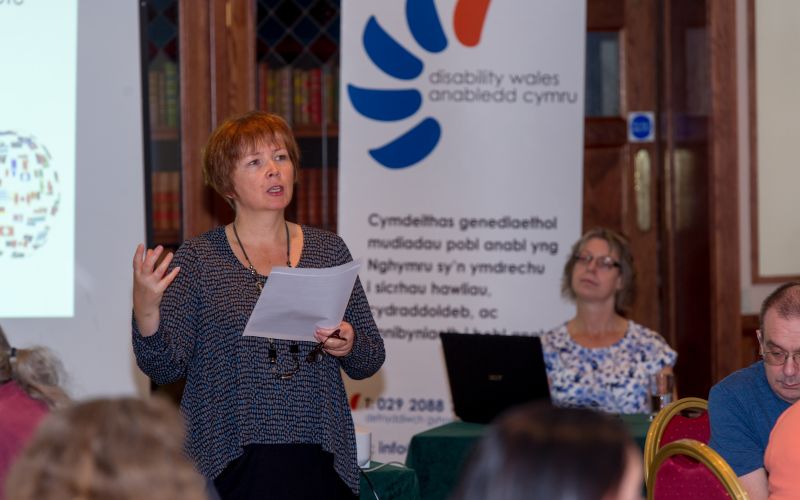 Disabled people in Wales will have a chance this week to provide crucial testimony on whether their human rights are being protected, for a report that will be sent to the United Nations (UN).

The forum in Llanelli on Thursday (13 October)* is the third of three events being held by Disability Wales in which people can explain their experiences of the rights they should have under the UN Convention on the Rights of Persons with Disabilities (UNCRPD).

Disability Wales – the national association of disabled people’s organisations (DPOs) in Wales – is working with Disability Rights UK (DR UK), with funding from the Equality and Human Rights Commission (EHRC), to put together a “shadow report” that will be submitted to the UN’s committee on the rights of persons with disabilities (CRPD).

A separate report on Scotland, by Inclusion Scotland and other Scottish DPOs – also funded by EHRC – will be combined with the Disability Wales and DR UK report to form a single report on implementation progress across Britain.

The Reclaiming Our Futures Alliance (ROFA) is also putting together a shadow report, drawing on about 40,000 disabled people linked to its member organisations, which include Equal Lives, Disabled People Against Cuts, Inclusion London and Sisters of Frida.

These and other shadow reports will be considered by the committee alongside the UK government’s own report, and those of the devolved governments.

Miranda French, policy and programmes manager for Disability Wales, said: “By putting our views on an international stage, it will give greater force to them, and make the government listen.

“Only then might things improve for the thousands of people living in desperation over changes to disability living allowance, and the back-to-work assessments.

“But the report can only have that effect if disabled people attend the events to give their views.”

The first of three forums organised by Disability Wales took place in Cardiff on 22 September, while another was taking place today (6 October) in Wrexham.

The Cardiff forum was attended by about 50 disabled people, and issues they raised included access to housing, public transport and the built environment; independent living; employment; cuts to legal aid; and being treated with a lack of dignity.

David Sage, from Bridgend Coalition of Disabled People, said he had spent his life savings on adapting his home, and had now had his benefits cut.

He told Disability Wales at the forum: “There’s just not enough money there for us to get on with life.

“I haven’t been upstairs in my own home for three years – since the day I had my stroke.”

Craig Channel, also from the coalition, told Disability Wales: “Some people need help with the work, with the reading, with the writing. There’s no help out there for that. It’s been cut.

“And there’s no adult education out there for people with learning disabilities, disabled people in general. The access to certain places is not very good.

“The stress of it all is making people unhealthy, making them miserable, upset.”

In a blog published this week, Sue Bott, DR UK’s deputy chief executive, said that many disabled people had not been able to attend these events because “personal support is no longer available and they are virtually confined to their own homes”.

She said the events have felt like “going back in a time warp”, with issues such as poor access to public transport, limited access to new buildings, lack of jobs, shared space street developments, lack of access to health screening programmes, and significant increases in the use of compulsory treatment orders for mental health service-users.

Bott said: “Some of the issues that are undermining our equality in society are the result of old battles that we thought we had won resurfacing again, like access to the built environment, some are the result of cuts in resources, such as inadequate support packages, others are issues that have been there a long time and refuse to go away, such as the employment gap between disabled people and everyone else.

“Perhaps article 8 of the UNCRPD [on awareness-raising] holds the key in placing responsibility on government to raise awareness of disabled people’s right to equality and the value of the contribution we make to society.

“Without that basic commitment and lead from government we really are facing an uphill task in realising our rights.”

Disabled people and DPOs unable to attend the evidence sessions hosted by DRUK and Disability Wales can fill in an online survey.

The survey asks for the priority issues they believe should be included in the report to CRPD; why these are priorities; and what evidence they can provide to show an adverse impact on the rights of disabled people.

CRPD is set to hold its delayed public examination of the UK government’s progress on implementing the convention next year, the first time the UK has been examined since the Labour government ratified the UNCRPD in 2009.

The examination has been delayed partly by a separate inquiry by the committee into allegations of “systematic and grave” violations of disabled people’s human rights in the UK.

The committee’s initial report on those alleged violations is believed to have been sent to the UK government.

*To book a free place at the Llanelli forum, visit the Disability Wales website