You are here: Home / Activism and Campaigning / Disabled protesters’ anger at Conservatives over spending cuts 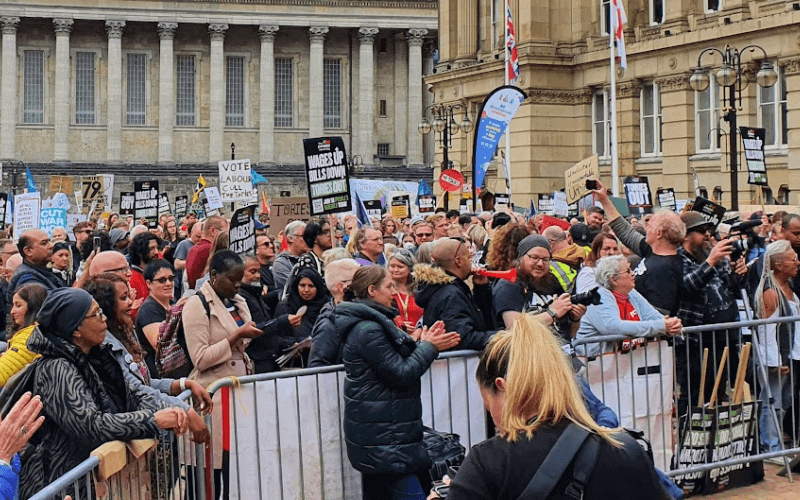 Disabled people from Birmingham who attended a protest near the Conservative party conference this week described their anger at the government’s tax-cutting announcements and fears of further spending cuts.

They were among those who gathered in the centre of Birmingham to “protest the Tory conference”, in a demonstration organised by the TUC and the People’s Assembly.

The protest took place before the announcement that Tory chancellor Kwasi Kwarteng would not after all abolish the 45 per cent top rate of income tax, which would have helped those with incomes over £150,000.

But the government also announced that it was scrapping the cap on bankers’ bonuses, and there have been mounting reports of plans for further real terms cuts to public services, including social security, following soon after the decade of austerity that led up to the pandemic.

Jo Winter, one of the disabled people from Birmingham who attended the protest, told Disability News Service (DNS): “There aren’t even words to describe what they could have done.

“What they did was just give tax cuts to rich people and lift the cap on bankers’ bonuses.

“People are freezing and unable to eat. People are just going to die, and they seem completely untouched by that.

“During the last 12 years of Tory government, the gap between rich and poor has just got wider and wider.

“There is no way forward unless there is a change of government because the level of poverty in this country and the stripping back of public services is so entrenched.”

Another disabled protester, Rebecca Jukes, said the government was clearly “not listening” and had even ignored the Bank of England and the International Monetary Fund.

She said: “Some of the stories that are coming through [from disabled people] are horrific.”

She said that those disabled people who need electricity the most are those who will pay the most, such as people who have to use medical equipment 24-hours-a-day.

Jukes said the future of the NHS was a “major worry” for her, particularly as she has type one diabetes and has heard of people in the US dying because they are having to ration their insulin.

She said: “The thought of an American-style system terrifies me.

“I think if I was struggling, I cannot imagine how terrified I would be.”

Jae Robinson, who spoke on the stage about the lethal impact of the social care crisis and government spending cuts, said that Kwarteng’s mini-budget was “totally obscene”.

She told DNS: “How many people are going to die, because that’s what it has come down to?”

She said she would protest by refusing to pay any more than she is at present for her utilities.

She said: “I will just continue to pay what I am paying for my bills, because I can’t afford to pay any more. 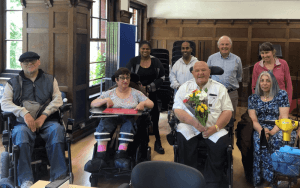