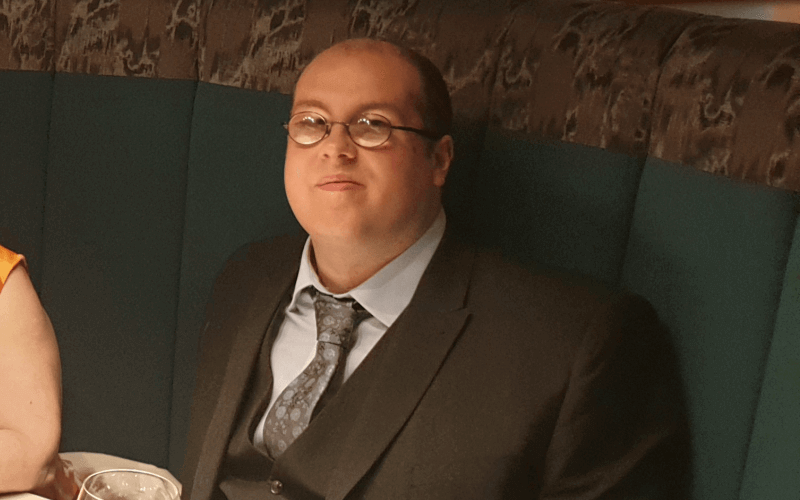 A disabled law student has spoken of the “sheer hell” he has been put through by the repeated and prolonged discriminatory actions of his university over the last five years.

So far, an ombudsman has upheld nine separate complaints made by Gary Copland against the University of Glasgow, with another 11 decisions pending.

Most of the complaints made by Copland (pictured), who is visually-impaired and autistic, concern a failure by the university to make reasonable adjustments under the Equality Act, and they now involve failings by nearly 100 members of staff.

They include a failure to ensure that books and articles he needed to read for his course were put in digital format – he says he was provided with just one of 600 legal texts he needed to read in his first year in an accessible digitised format, and in the second year just four out of 500.

One upheld complaint related to the university ushering Copland’s support worker from the room just as an exam was about to start, which left him humiliated, confused, and angry.

The university then refused to interview the support worker when Copland lodged a complaint.

During his five-and-half years at the university, he has had to respond to about 20,000 emails about his attempts to secure the reasonable adjustments he needed, and complaints of discrimination, while still having to manage his law studies.

He has often been forced to spend eight hours a day just reading and responding to the university’s emails.

And despite the ordeal, he still cannot graduate because of ongoing appeals over his results.

He has only been able to survive with the support of his uncle, Professor Simon Harding, a lecturer in criminology, who has spent 20 hours-a-week on his nephew’s case for the last five years.

Copland won a place at the prestigious university because of the A grades he secured at Motherwell College – now part of New College Lanarkshire – which had provided him with “fantastic” support that allowed him to show his full potential.

But from the beginning of his law course at Glasgow, the support he had been promised did not materialise.

He told Disability News Service: “It has just been awful, really, really awful.

“It has been a very, very difficult, stressful experience. It has been completely unbearable.

“I wouldn’t wish it on anyone. It has been a completely horrendous experience from start to finish.”

Copland said the university had appeared to be “more interested in being defensive and covering their backs and not actually solving the problems.

“It has taken an enormous toll on everyone who is involved. Even for the university it has been quite challenging.”

He said: “My uncle is aware of other students who have had problems with disability support at Glasgow University. It’s not just me.”

He said the university needed to “take the issue seriously” and admit: “Yes, we accept we have got it wrong and we want to try and fix it.”

He said: “We accept that sometimes they will get things wrong, but they should be able to listen to criticism and put things right.

“I don’t think they are that familiar with the Equality Act because we keep telling them, ‘You need to do this and that and if you don’t you’re in breach of the Equality Act,’ but they don’t seem to really care.

“They are more interested in protecting their own reputation.

“I think they need to completely review how they manage disabled students and how they provide all their reasonable adjustments.

“It’s an ancient university, they are stuck in the past, not wanting to catch up with modern times.”

Copland was not able to graduate alongside his class-mates last year because the university had failed to provide him with a laptop and the necessary software for 33 weeks of his final year.

On one occasion, he attended a jobs fair for law students, and asked the university to put eight leaflets he had collected from potential employers into digital format, so he could apply for jobs.

Staff refused to digitise the leaflets and then failed to return them to Copland.

This resulted in one of the many complaints that has been upheld by the Scottish Public Services Ombudsman.

Copland began his law degree in September 2015 but since then his efforts to secure the reasonable adjustments he needs to complete his degree have taken over his life.

Harding said: “I cannot understand or fathom their behaviour, other than to think it is absolutely personalised and malicious from start to finish and that it is under-pinned by a cavalier culture towards disabled people. They are just thought to be trouble-makers.

“I think the university has a culture of denial. They have just had published a review of provision of support for disabled students.

“It shows there are multiple areas to fix and many, many issues that have been raised by the students who responded.

“There is enormous cultural failure here, systemic failure that comes from the top all the way down.

“They pay lip-service to many of these issues around disability and reasonable adjustments.”

He added: “Staff behaviours go unaddressed and unchallenged even when it amounts to bullying and harassment and victimisation.

“They seem to be complete strangers to the Equality Act.”

Over the last year, Copland has lost nearly five stone in weight because of the ongoing struggle with the university, and is experiencing post-traumatic stress disorder, as are his mother and uncle, as well as anxiety and panic attacks.

Harding said: “My sister will drive miles out of her way when driving across Glasgow, because she feels physically sick when she passes the university.

“She will run from the room when somebody mentions the university.

“That’s the impact it has had on her. It has impacted the entire family.

“It is the worst experience of our adult lives. It is absolutely devastating.”

A University of Glasgow spokesperson refused to say what so many upheld complaints demonstrated about the university’s treatment of disabled students and its understanding of the Equality Act; and whether it was embarrassed at such prolonged and repeated discrimination.

But the spokesperson said in a statement: “The University of Glasgow is committed to promoting and implementing equality of opportunity in the learning, teaching, research and working environment.

“Our students are able to draw on the expertise of our disability advisers and IT professionals, along with a team of dedicated support workers.

“We are able to and do make bespoke adjustments to both teaching and assessments with the needs of our students in mind.

“The University’s Disability Service and its distributed network of disability co-ordinators, who are operational in each of our academic areas, provide a dedicated service for students with disabilities and/or impairments, assessing and putting in place appropriate provision to assist with their learning.

“We do all we can to support our students to be effective learners and continually seek to improve.

“Since Gary successfully completed his degree programme last year, we have undertaken two reviews of our disability provision for students with disabilities – one by external advisers and one led by a vice-principal. We are implementing the findings of both.”

The university has this week refused to offer an apology to Gary Copland.

As a result of the discrimination he experienced during his degree, Copland is not sure if he will be able to continue on the path towards a legal career, as the next step is another year at university, and his experience at Glasgow has damaged his confidence.

He said: “It has kind of messed up my ambitions.

“At the start I was really, really keen to do this. Now I just feel I am not actually that motivated anymore.

“What if these problems re-occur? And if I come back to Glasgow, it would be another year of sheer hell.”