You are here: Home / Benefits and Poverty / DWP snubs coroner’s call for change after severely-ill patient was told to visit jobcentre 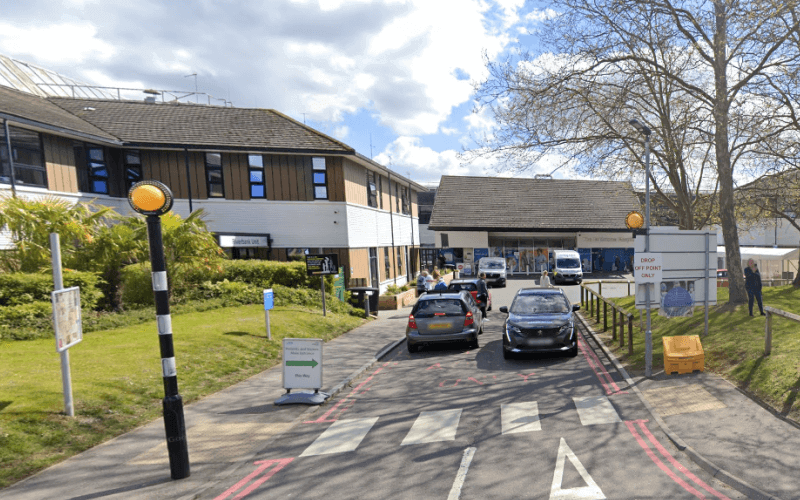 The Department for Work and Pensions (DWP) has refused to “make any changes”, despite admitting that a disabled patient was told to leave hospital to visit a jobcentre when he was severely ill with a condition that later killed him.

The admission by a senior DWP executive came in response to a call for DWP to take urgent action by Sonia Hayes, assistant coroner for Mid Kent and Medway, after the death of 58-year-old Terence Talbot.

Health professionals had told an inquest into his death that they had never heard of such a “severely ill inpatient” being told to leave hospital to make a benefit claim in person.

Talbot, who was also being detained under the Mental Health Act, was being treated at Maidstone Hospital (pictured) for drug hypersensitivity syndrome (also known as DRESS syndrome), because of a rare reaction to medication that had been prescribed for his mental distress.

The severe allergic reaction had left him “very vulnerable to infection” and at risk of death, but he was told by DWP contractor Serco to leave the hospital and attend Maidstone jobcentre to confirm his identity as part of a new claim he had made for universal credit (UC).

The letter to Hayes from the senior DWP executive reveals that Talbot had made an online application for UC on 24 January 2020, with the help of a nurse, and told DWP he had been in hospital for more than six weeks, that he was receiving moisturising treatment to his whole body four times a day due to DRESS, and that he had bipolar.

He was instructed to phone a helpline, run by Serco, so he could book a face-to-face appointment in the local jobcentre to verify his identity, and the Serco adviser told him to attend the appointment four days later, on 28 January.

Following that visit to the jobcentre, which he attended in a wheelchair, a note was added to Talbot’s file to show that his next appointment should be by telephone.

The next day, on 29 January, a nurse told DWP of the hospital’s “concerns surrounding his mental health and ability to participate in appointments”.

Five days later, another phone call led to his commitments to being available for work, and to search and prepare for work, being “switched off” by DWP.

On 11 February, DWP decided he was eligible for universal credit.

Terence Talbot died in Maidstone Hospital, less than two months later, on 9 April, from multi-organ failure caused by the lung conditions pneumonia and empyema, which themselves were caused by DRESS.

Following the inquest last year, Hayes wrote a prevention of future deaths report to work and pensions secretary Therese Coffey to warn her that other claimants could die if she did not make urgent changes to how DWP deals with such cases.

This week, DWP’s response to Hayes’s letter was published on the Courts and Tribunals Judiciary website.

But DWP says in its letter to Hayes that it does not plan to make any changes to its policies or practices in response to the concerns she raised.

It claims that the department had not been aware of the “severity of Mr Talbot’s illness” at the time of his UC application and had not “held any evidence” to suggest that he had been sectioned under the Mental Health Act.

It adds: “This information was not included in his online application form and we hold no evidence which suggests that Mr Talbot’s physical condition was considered to be potentially life-threatening at that time.”

The DWP letter also stresses that it had not been aware the inquest was taking place and that the coroner had “made no findings that DWP’s actions in any way caused or contributed to Mr Talbot’s death within her conclusions”.

The letter to Hayes also reveals that DWP’s processes around UC identity verification changed last November so that there is now a “remote option to verify ID where possible and safe to do so”, which “reduces the number of customers that we ask to come into the Jobcentre”.

Because of DWP’s “audio recording retention policy”, the recording of the 24 January call with Serco has been deleted and it is not clear what the Serco helpline adviser was told or what he told Terence Talbot.

DWP insists in the letter to Hayes that “on the information currently available to the DWP, we received no evidence to suggest that Mr Talbot was unable to attend that appointment on account of his illness, or otherwise”.

In the letter’s conclusion, the DWP executive says the department is “committed to ensuring that claimants are given the right support at the right time” and that if a claimant cannot attend a DWP jobcentre “due to a disability or health condition, reasonable adjustments can be made”.

It claims that it made reasonable adjustments for Talbot once it was aware of his circumstances, and that because of the November 2021 changes it is “satisfied that the appropriate support is available to allow vulnerable claimants with complex needs to access benefits”.

It adds that “on that basis, we do not propose to take any specific actions or make any changes at this time in response to the concerns raised by HM Assistant Coroner”.

A spokesperson for Serco, which still has the DWP appointment booking contract, said: “Due to GDPR* requirements and in accordance with our contract with DWP, all recording of calls are deleted after 14 months so we have no records of any calls with Mr Talbot.”

He said that Serco – as with DWP – had not been aware the inquest was taking place and that the coroner had made no findings that its actions had caused or contributed to Talbot’s death.

But he had declined by noon today (Thursday) to say if Serco had any information about what details were shared by Talbot with its adviser during the phone call on 24 January 2020.

He also declined to say if the company was comfortable with the actions it had taken, and whether it carried out its own investigation into the phone call.

The coroner was also highly critical of Kent and Medway NHS and Social Care Partnership Trust (KMSCPT) – which provides mental health services across Kent and Medway – and Maidstone and Tunbridge Wells NHS Trust (MTW) for their failures.

She told KMSCPT that it had failed to subject all the decisions about Talbot’s care and treatment to formal Mental Capacity Act assessments at a time when he was “refusing medical interventions that were in his best interests”.

She had also concluded, in relation to MTW: “The absence of regular dermatology review, lack of application of emollients for whole body severe exfoliative dermatitis and food and fluid not being adequate to meet his needs leading to malnutrition amounted to a gross failure to provide basic medical care that would have prolonged but probably would not have saved his life.”

Both trusts have written to the coroner and – in contrast to DWP – have detailed a series of measures they have taken in response to the concerns she raised after the inquest.