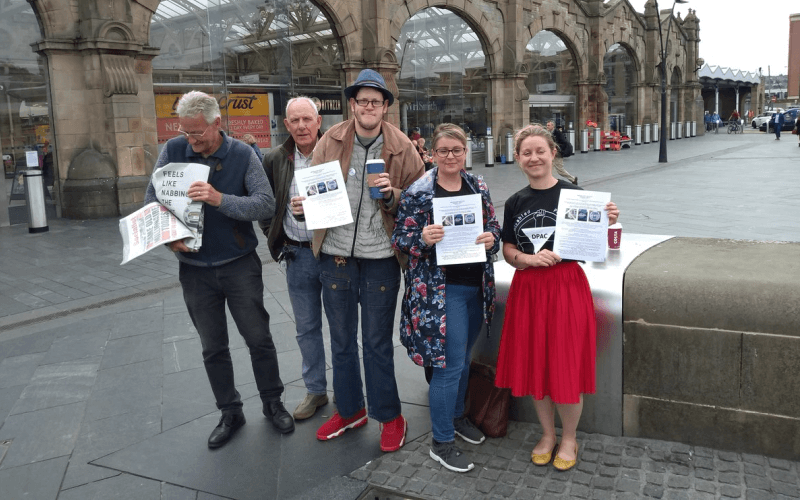 A Department for Work and Pensions (DWP) advertising campaign that is now being investigated by a watchdog has backfired by helping to create a national network of campaigners opposed to its new universal credit benefit system, say disabled activists.

The advertising watchdog this week launched an investigation into what critics say are “misleading” DWP adverts that have attempted to “whitewash” the truth about universal credit (UC).

Disabled activists have repeatedly warned that UC – which combines six income-related benefits into one – is “toxic” and “rotten to the core”, with “soaring” rates of foodbank use, and repeated warnings about its impact on disabled people.

The Sheffield branch of Disabled People Against Cuts (DPAC) said it was “encouraged” to hear that the Advertising Standards Authority (ASA) had confirmed it was investigating concerns about the DWP adverts, which appear every week in the Metro free newspaper.

But Sheffield DPAC said there were now hundreds of activists around the country who were “actively dumping the Metro newspaper”, and praised a Labour city councillor in Sheffield, Francyne Johnson (pictured, right), who supported the campaign yesterday (Wednesday).

Sheffield DPAC claimed that hundreds of thousands of copies of the free newspaper have been removed from distribution points around the country and sent for recycling.

It was Sheffield DPAC which first raised the alarm about DWP’s plans to launch a nine-week series of advertising features in the Metro.

Senior DWP civil servants had said in an internal memo, first leaked to the Guardian and then to Disability News Service (DNS), that the adverts would “myth-bust the common inaccuracies reported on UC” and “explain what UC is and how it works in reality”.

A Sheffield DPAC spokesperson said transport workers were now alerting activists to let them know when and where Metros were being delivered so they could be removed and recycled.

She said: “The campaign has grown from a small protest in Sheffield to a well coordinated and incredibly effective national campaign that has seen hundreds of thousands of copies of the Metro now removed from stands and sent for recycling in just a matter of weeks.

“Initially we were removing them by hand, which was exhausting. Now we’ve got hired vans and large numbers of people removing huge amounts relatively effortlessly.

“Although we’re obviously very angry and upset that these ads are still appearing (they were in Metro today) we’re confident that we can now achieve more and reach farther than ever before as we have such excellent communication between a huge number of unions and groups now, thanks to this campaign.

“The DWP, through releasing this propaganda, have unwittingly created a huge national anti universal credit campaign network. That backfired a bit, didn’t it!”

The latest advertorials appeared in the Metro yesterday, even though ASA announced this week that it has launched a formal investigation into the DWP adverts.

ASA said it has received more than 40 complaints about the adverts.

One of the concerns it will investigate is whether some of the adverts were “obviously identifiable as ads”, rather than being disguised as an investigation carried out by the Metro.

Last month, DNS sent ASA an image of the Metro website’s home page which showed a series of images and claims about universal credit which failed to state that they were actually DWP adverts.

The leaked DWP documents revealed that these adverts were always designed to be misleading and not to “look or feel like DWP or UC”.

ASA will also investigate whether three key claims made in the adverts were misleading and if they could be substantiated by DWP.

These claims relate to criticisms of UC that have been made by welfare rights experts, claimants and activists, based on years of evidence, but which DWP has branded as “myths” in its adverts.

A DWP spokesperson claimed that all the advertising contains the words “Advertising Feature from the Department for Work and Pensions”, even though DNS pointed out that the adverts on the Metro website home page had not done so.

She confirmed that ASA had been in touch with the department and that DWP was “working with them to respond to the points raised”.

She said: “It is important people know about the benefits available to them, and we regularly advertise universal credit.”

She added: “We have consulted the Advertising Standards Authority throughout the partnership and our advertorials reflect their advice.”