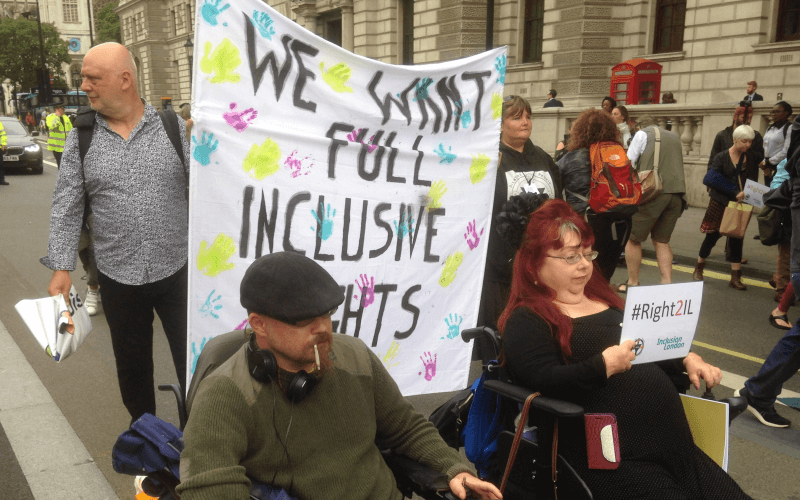 The equality and human rights watchdog has described six key elements that it believes would be needed to enable disabled people in the UK to have a legal right to independent living.

The Equality and Human Rights Commission (EHRC) has been examining whether there needs to be a legal right to independent living since at least November 2017.

Last year, a barrister commissioned by the watchdog concluded that there did need to be such a legal right.

EHRC has been developing a working paper describing how this could be achieved, although it is still “refining” its proposals.

Two years ago, the UN committee on the rights of persons with disabilities called on the UK to recognise disabled people’s right to live independently, and said it was “going backwards” on independent living.

The committee has recommended that article 19 (on independent living) of the UN disability convention should be incorporated into UK domestic law.

In the working paper, EHRC says it agrees with this recommendation, but believes there is “no single way” to do this.

Instead, a “mixture of provisions with duties and rights of varying strength, levels and breadth is likely to be required”.

It believes there would be six “key elements” to how this could be done.

The first would be to create a new duty on certain public bodies, such as local authorities and NHS clinical commissioning groups, to act with the aim of meeting the requirements of article 19.

Secondly, there would be a legal presumption that accommodation should be provided in the community, with care and support to enable community or home living, as long as this was in line with the disabled person’s wishes.

Disabled people should also be able to decline care (or elements of that support), “even if others may think those care elements are best for their well-being”, and they should have that wish respected.

There should also be a ban on the building of new “institutional” accommodation, although the working paper does not currently recommend that existing institutions should be shut down.

The fifth element is for local authorities, and central government, to carry out a regular assessment of unmet need for accommodation, support and care in the community, probably every two years.

The final “key element” would be to set up a new independent body to enforce the right to independent living and decide if local authorities have “discharged their obligations”.

The working paper also attempts to define institutional accommodation, suggesting that it is a setting where residents are isolated from the broader community; or live with people other than those they have chosen to live with; or where they do not have control over their day-to-day lives and the decisions which affect them; or where the interests of the organisation itself “tend to take precedence over the residents’ individualised needs or wishes”.

Although the working paper has not yet been published on the commission’s website, it was submitted quietly in April as evidence to the parliamentary joint committee on human rights, for its ongoing inquiry into the inappropriate detention of young autistic people and young people with learning difficulties.

Leading figures in the independent living movement have given the proposals a generally positive welcome (see separate story), while some of them have been working with the commission on its proposals.

David Isaac, EHRC’s chair, said: “The evidence shows that the rights of disabled and older people to live in their communities are at risk.

“Disabled people often feel like second-class citizens, and many are sadly faced with little choice but to move into institutions. They are often left feeling ostracised.

“We need a transformative solution that reaffirms our commitment to ensuring that everyone can live as part of their community where no one is forced out of the place they call home.

“We are confident that our solution will protect the right of many more people to live in their communities and we would welcome a national conversation to take our proposal forward.”