You are here: Home / Politics / Election 2017: SNP calls on next government to follow Scotland’s lead on benefits

The SNP has called on the next UK government to follow Scotland’s lead in protecting disabled people from social security cuts.

The SNP general election manifesto, published this week, says the party will fight to end the “appalling Tory welfare policies” that have damaged disabled people and other groups.

The manifesto calls on Westminster to follow the SNP Scottish government in removing private sector companies from having any involvement in disability benefit assessments, and scrapping the work capability assessment and replacing it with a new system that “treats everyone with fairness and respect, helping people into employment rather than crisis”.

It also says SNP MPs will push for the UK government to reverse its £29-a-week cut to new claimants of employment and support allowance who are placed in the work-related activity group – introduced earlier this year despite widespread opposition – and that it will vote against any further cuts to social security.

And the party will continue to push for the Scottish government to have full control over all social security benefits.

It points out that the Scottish government already plans to use its limited social security powers to abolish the bedroom tax, extend the winter fuel payment to families with disabled children with high support needs, rule out means-testing disability benefits, and reintroduce long-term benefit awards for people with long-term conditions.

Elsewhere in the manifesto, the party calls for action to address the disability pay gap, which the Equality and Human Rights Commission said in April was “persistent and widening”.

The party wants to see equal pay audits covering disability, race and gender – they currently only cover gender – and to have them extended to all firms with at least 150 employees, rather than the current level of 250, as well as “sanctions, including fines, for employers that fail to comply with the law”.

It also wants all public authorities with more than 20 employees to provide equal pay statements every four years, in which they would provide their policies on equal pay and report on disability, gender and race.

The manifesto also promises that SNP MPs will “oppose any attempts” by the UK government to scrap the Human Rights Act and withdraw from the European Convention on Human Rights.

And it says that SNP MPs will support cross-party efforts at Westminster to give legal recognition to British Sign Language (BSL), and strengthen the rights of BSL-users.

The manifesto also pledges that the party will “work to ensure that there is as much support as possible for disabled people, and people of all classes, races and gender identities to stand for election to the House of Commons”.

An SNP spokeswoman confirmed later that the party wanted the UK government to reopen the Access to Elected Office Fund, which provided funding to help disabled people with the extra costs they faced in standing for Westminster and local elections, but was shut down by the Conservatives after the 2015 election.

As many areas of policy are devolved to the Scottish parliament, issues such as accessible transport and housing are not covered by the SNP manifesto.

But an SNP spokeswoman said that those issues are covered in the Scottish government’s five-year plan, A Fairer Scotland for Disabled People, which lays out the 93 actions it believes will help Scotland meet its obligations under the UN Convention on the Rights of Persons with Disabilities.

These include ensuring that each local authority sets a “realistic target” for building wheelchair-accessible housing, and reports annually on its progress, and that the Scottish government will abolish fees for employment tribunals, and will ensure that the seven main criminal justice organisations carry out audits of their buildings to “identify any physical access barriers that need to be removed”.

The SNP manifesto says that the UK government should “work towards” incorporating the UN convention into UK law.

The manifesto includes 23 mentions of the words “disability”, “disabled” and “disabilities”. 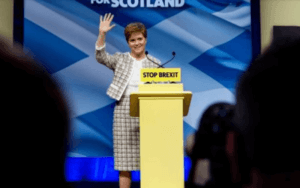