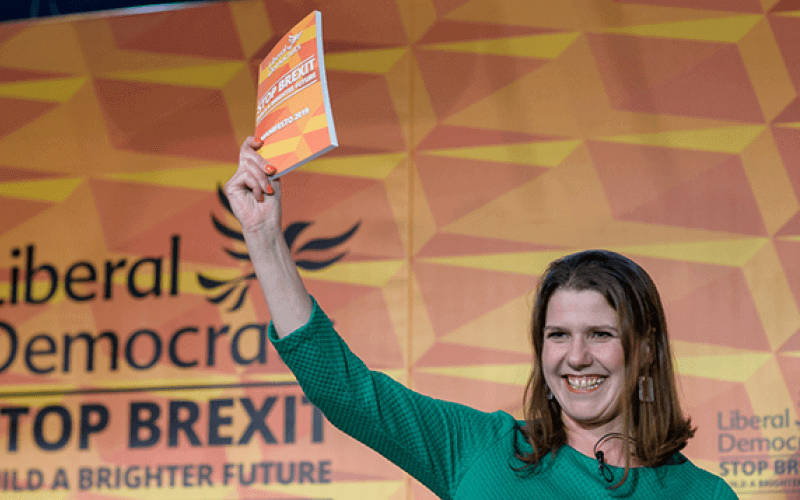 The Liberal Democrats have been unable to explain why several of their general election policies on disability were copied word-for-word from their 2017 manifesto.

Last week, Disability News Service (DNS) reported that the party had refused to explain why it had omitted disabled people from key measures in its equalities manifesto, and had failed to provide any detail on other measures.

Now, nearly two weeks after the equalities manifesto was published, the party has tried to provide further clarity, but has only succeeded in revealing that it has copied several of its disability policies word-for-word from its 2017 manifesto.

One of those measures is “banning discrimination by private hire vehicles and taxis”.

The party explained this week that this referred to a pledge to bring into force section 165 of the Equality Act 2010, which ensures that drivers of taxis and minicabs can be prosecuted for discriminating against wheelchair-users.

But this measure came into force more than two years ago, even if its implementation was subsequently heavily-criticised.

It emerged yesterday (Wednesday) that the policy has simply been copied from the party’s 2017 manifesto, albeit with slightly different wording.

This appears to be the reason for the out-of-date policy, with the wording of a section of the 2017 manifesto replicated almost word for word in this year’s manifesto.

The 2017 manifesto (PDF) made the following disability-related pledges: “Increase accessibility to public places and transport by making more stations wheelchair accessible, improving the legislative framework governing blue badges, setting up a benchmarking standard for accessible cities, and bringing into effect the provisions of the 2010 Equality Act on discrimination by private hire vehicles and taxis.”

There is further confusion over the “benchmarking” policy, with the party suggesting this week that the measure would ensure that 80 per cent of the bus routes a local council has responsibility for would have to include at least one that was wheelchair-accessible.

The party has been unable so far to explain why this measure would be necessary when all buses now have to be wheelchair-accessible under the Equality Act.

Meanwhile, the party said that it wanted to ensure that all major rail stations with step-free access are staffed from first to last train to ensure there is always assistance on hand for passengers who need it.

In smaller stations, where it is too expensive to provide permanent staffing, the party has told DNS that there should always be guards on the trains that stop at those stations to ensure that help is available.

The party also says that all rail staff should be trained to use the ramps that allow wheelchair-users onto trains.

It is not yet clear, though, whether these staffing measures would be mandatory.

The party has told DNS that it would also ensure that new developments near stations include planning conditions that provide funding for an upgrade to the station’s accessibility, and that local authorities should be provided with increased capital funding to improve the accessibility of railway stations.

The party has also clarified that disability hate crimes are included in its manifesto pledge to make all hate crimes aggravated offences.

It also says that disability would be included in measures to force all large companies with more than 250 employees to monitor and publish data on gender, BAME and LGBT+ employment levels and pay gaps.

The party has blamed a “typo” for the failure to include disability in its original manifesto pledge, and it said this was now being amended in the online versions of the manifesto.

The party also admitted that it should have included disabled children and young people in its plans to address bullying in schools, in addition to bullying on the basis of “gender, sexuality, gender identity, or gender expression”, which it said had been “an illustrative rather than an exhaustive list”.

It also appears to have admitted that it should have added people with mental health conditions and learning difficulties to measures to address over-representation of people from BAME in the criminal justice system.

The party said it recognised the over-representation of people with learning difficulties and mental health conditions in the system and said that to reduce this it would “invest substantially” in mental health services, “improve the way in which the police handle mental health crises” and improve mental health support in the criminal justice system.

It would also invest in education to help people with learning difficulties, and bring in measures to minimise school exclusions.