You are here: Home / Transport / Equality Act has ‘let down’ disabled people on public transport 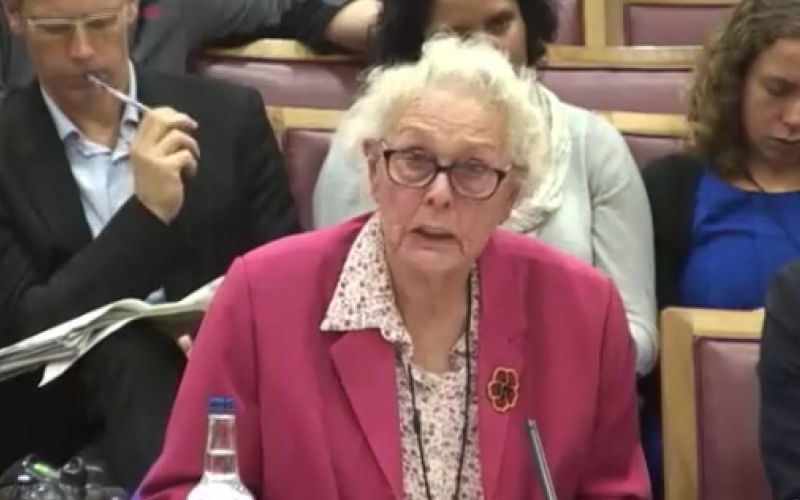 Some disabled people have been “let down” by the Equality Act when it comes to access to public transport, a disabled campaigner has told members of the House of Lords.

Gwynneth Pedler, a member of the user-led campaigning organisation Transport for All, told peers that wheelchair-users were often “helpless” in trying to access wheelchair spaces on buses when they find them occupied by pushchairs or non-disabled passengers.

She said that many members of Transport for All had “given up the struggle” and no longer access transport because it was “too great a risk”.

She told the committee examining the impact of the Equality Act 2010 on disabled people that she had once been refused access to buses four times in one week because there were pushchairs in the wheelchair space.

Pedler (pictured, giving evidence) said: “Everyone takes possession of our wheelchair space. That’s the greatest problem. We are helpless to get this put right. It happens all the time.”

She added: “I am talking as a disabled person. I haven’t got fine words for you. I am talking to you as I experience it, along with all the other members in Transport for All.”

Told by Graham Pendlebury, the Department for Transport’s director of local transport, that the bus industry had made progress in providing accessible vehicles, she said: “I don’t argue that these buses are accessible, but if we cannot get on them and we cannot access the pavements because they are too dangerous for us, having access is of little importance to us.

“Progress has certainly slowed – this is the opinion of Transport for All – since the Equality Act.”

The disabled crossbench peer Baroness [Jane] Campbell asked the three-person panel whether it was fair that disabled passengers had to phone up 24 hours in advance when they wanted assistance to use a train.

She said: “This is the blight of disabled people’s lives, that they cannot be spontaneous.”

Pedler said that TFA saw the requirement for disabled people to book assistance 24 hours in advance of a train journey as a “great injustice”, while some companies asked for 48 hours’ notice.

She said: “It stops us from being flexible. We can’t change our mind and go out to lunch with a friend. It takes away our independence and our freedom of choice.”

And she said she had often been unable to board a train even after booking assistance in advance.

Keith Richards, chair of the Disabled Persons Transport Advisory Committee, said having to give notice two days in advance was “not equality”, and that it should be possible to send a text or use a smartphone app just a couple of hours beforehand to alert the relevant rail operator.

Pedler also told the committee that the Liberal Democrat transport minister Norman Baker had promised five years ago that laws on access to taxis, originally included 20 years ago in the Disability Discrimination Act – and later in section 165 of the Equality Act 2010 – would be implemented, but the promise was “taking a very long time to come to fruition”.

Richards said it made “absolute sense” for section 165 to be implemented.

He said: “There are many, many stories that we hear of people who are charged extra, who aren’t assisted or who aren’t even provided with the service because the taxi-driver will see them in advance and drive somewhere else. That is completely unacceptable.”

Pendlebury told the committee there were “a number of reasons” why section 165 had not yet been implemented, and he said it was “under constant review”.

He said: “The concerns were around burdens on drivers and whether this particular provision would actually fully meet the varied needs of different types of disabled people.

“I don’t believe that taxi-drivers or minicab drivers are bad people and threatening them with enforcement and fines – whether that is the right way to bring about a change in procedure.

“I think that government is keen to try to avoid a very heavy-handed implementation and to make sure that enforcement is a last resort.”

But he added: “Clearly we have seen much evidence about how catastrophic it can be for people when they are either mistreated in this way or denied access.”

Baroness Deech, the crossbench peer who chairs the committee, said it had been the “will of parliament” that section 165 should be introduced.

She said: “The burden is now being borne by those people who need those taxis and can’t get them. There can be no questioning of this.”

She added: “I still haven’t heard a decent reason why section 165 should not be brought into effect, so we note that.”

And she asked Pendlebury to ask his minister to write to the committee to explain why section 165 had not yet been implemented and when that would happen.

Baroness Campbell asked Pendlebury to show the committee the research on which the government had based its position that implementing section 165 could be a “burden” on drivers.

Rail industry and government under attack over ‘outrageous’ access exemptions