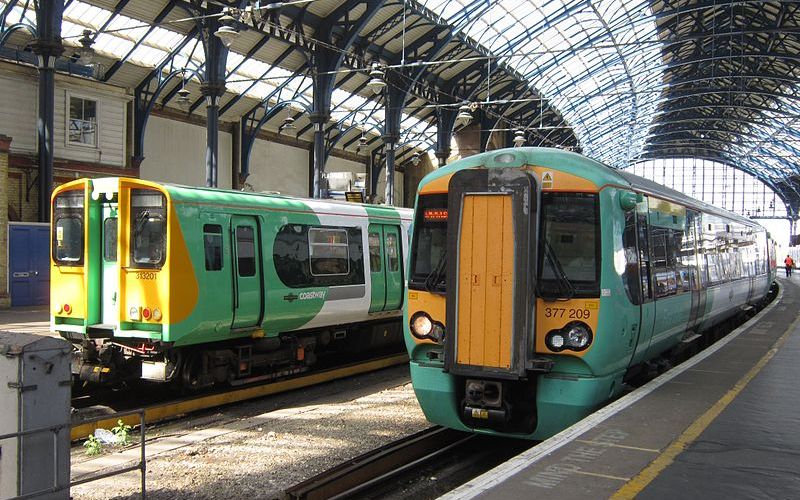 The equality watchdog is considering legal action against the government over its failure to ensure an accessible rail service, according to a leading disabled expert.

The potential legal action emerged in the wake of anger directed at rail operator Govia Thameslink Railway (GTR) – which runs Southern (pictured), Thameslink, Gatwick Express and Great Northern – after it issued “grossly insulting” guidance to staff on how to deal with disabled rail passengers.

Among the advice in the Pit Stop guidance was that staff should not attempt to place “persons of reduced mobility (PRM)” on a train “if there is a possibility of delaying the service”.

It also tells staff that any PRM wishing to travel by train to an unstaffed station should be taken to the nearest staffed station to their destination and then “assisted into a taxi”.

And it says that “ill passengers need to be removed from the train as quickly as possible” because “not taking action will cause thousands of other passengers to be stuck on trains”.

For people “who are fitting”, the guidance says, staff should “wait for the convulsions to stop and be ready, if appropriate, to move them once they have started to wake up”.

Marsha de Cordova, Labour’s shadow minister for disabled people, said the guidance was “shocking” and “grossly insulting to disabled people, who are being treated as second class citizens”.

Although other disabled campaigners were outraged at GTR’s guidance, they also said it was an inevitable consequence of government rail policies.

Ann Bates, a leading transport access consultant and former rail chair of the Disabled Persons Transport Advisory Committee, said she blamed both the government and GTR for the guidance.

She believes the guidance is a direct result of government policies that force companies to cut staff and run driver-only operated (DOO) trains – with no second member of staff on board to help disabled passengers on and off trains – and run more services with fewer delays.

Bates said she has been discussing the discrimination faced by disabled rail passengers with the Equality and Human Rights Commission (EHRC) and has been told it is considering legal action under the Equality Act against the government.

She said: “I think we have more than enough [evidence]. They have not provided the right reasonable adjustments. It is blatantly prejudicial.”

Asked whether EHRC was considering legal action against both GTR and the government, she said: “I think the EHRC were going towards the government as opposed to GTR because [the problems that have been seen at GTR have also] moved to other franchises.”

It was the government, she said, that had written the franchise agreements with the train companies, although the [GTR] guidance would be useful evidence for any legal action.

She said legal action against the government would be justified because its policies had forced rail companies to run train services without a second member of staff.

She said: “If there’s nobody on the train and an unstaffed station you have virtually told me I cannot travel on three-quarters of the network.”

Bates, who has previously worked as a consultant for Southern, said the GTR guidance was “insulting” and “the most ridiculous piece of guidance I have ever seen”.

She said: “Never before has there been such awful attack on PRMs and ill people.

“I should have the same right to get on a train as some nimble, middle-aged man with a briefcase.

“I have fulfilled my half of the bargain, they have to fulfil theirs. It [should be] a level playing-field.”

Bates was at London Bridge station last December, having pre-booked assistance and arrived early, but was told by a member of staff at the station that she could not board the train because he could not contact the station she was travelling to – East Croydon – to confirm there was someone there to help her off.

Bates said that paying for a taxi was not a “reasonable adjustment” under the Equality Act, partly because of the shortage of accessible taxis in many parts of the country.

She added: “Why would I get a taxi to join the same traffic queue I had paid to avoid?”

An EHRC spokeswoman said: “We cannot comment on on-going cases, but we are working to ensure transport companies are aware of their responsibilities under the Equality Act, and to improve access to transport for disabled people.”

She added: “Access to public transport is something that many people take for granted, but for disabled people it is crucial to their ability to live independently.

“Transport service providers have a duty to make reasonable adjustments to ensure that everyone is able to use those services.

“We are closely monitoring access to transport for disabled people to ensure that this is happening.”

But he said it was important not to focus only on GTR because the attitude to disability across the industry was “appalling and unacceptable”, while the use of DOO services was “discriminatory”.

Brookes said he believed the regulator, the Office of Rail and Road, needed stronger powers to “take a proactive approach” to ensuring that rail companies comply with their disabled people’s protection policy (DPPP), which describes the assistance they provide disabled passengers.

He said that the “increasing disaster of rail company DPPP guidance” demonstrated the need for “far better regulation” rather than just “advice”.

He added: “For older and disabled people the impact of changes, reduction in train staff and new but still badly designed frequently inaccessible trains is making rail travel almost a ‘no go’ scenario for many disabled people, never minding the restrictive costs.”

Disabled People Against Cuts (DPAC) said the guidance showed that the journeys of disabled passengers “can be disrupted for no more reason than that the GTR cannot ensure a decent level of staffing”.

DPAC said GTR believes it “has the right to refuse access, remove passengers or alter their mode of transport provided these passengers are of reduced mobility” because the company “holds Speed, Efficiency and Shareholder’s Profits supreme”.

DPAC took part in a protest against the guidance on Monday outside London Bridge station, alongside campaigners from the Association of British Commuters (ABC).

Transport for All (TfA), the user-led organisation which campaigns for an accessible transport system in London, which had members at the DPAC/ABC protest, backed the idea of legal action.

Alan Benson, TfA’s chair, said the leaked GTR document “clearly establishes that the priority is to run trains on time, which is understandable given the fines incurred and the criticism GTR have faced over recent years”.

But he added: “That this comes at the expense of passengers requiring assistance to overcome the barriers inherent in British railways is completely unacceptable.”

He said the guidance was “explicit” that disabled passengers should be “left stranded” if the short time the train had while stopping at a station did not provide enough time to deploy the ramp or escort a blind person to a seat.

He said: “The impact is most keenly felt on the frequent occasions when things don’t go as prescribed, when staff forget you’re waiting, when the destination can’t be contacted.

“As staff disappear from the railways it is becoming increasingly clear that disabled people are the ones that suffer. The revelations in this document reveal why.

“Disabled people are not asking for special treatment. We are asking for reasonable support to overcome the barriers we face using the railways and that when the system fails we are not let down or scapegoated.

“When we turn up on time we expect to be able to board a train of our choosing. This is no more or less than every other passenger.”

A GTR spokesman said: “We place a high priority on making our services accessible to all and actively encourage people with restricted mobility to use our trains.

“Our policy remains the same, which is to offer assistance to all passengers to help them with their journeys.

“We have a responsibility to make sure each service leaves on time to avoid knock-on delays, skipped station stops and cancellations to other services which would affect thousands of other passengers, many of whom may also have mobility difficulties.”

He said the term PRM included all passengers who need assistance, including those with heavy luggage, bikes and buggies.

The spokesman said that since GTR “modernised the role of around half of our conductors in January 2017” there were now “more staff on more trains, with more time to help passengers, especially those with mobility difficulties”, and there had been “improvements to punctuality, reliability and passenger satisfaction”.

He said: “In the very rare instance where a train without its on-board supervisor calls at an unstaffed station where a passenger with restricted mobility needs help to board or alight, we have tried and tested procedures in place to help the passenger make their journey.

“All of our policies and procedures meet fully all disability discrimination laws and regulations.

“We take our obligations seriously and continue to focus on improving customer experience for all our passengers, including those that may need more assistance from us on their journeys.”

The Department for Transport (DfT) refused to say whether it believed the GTR guidance showed that disabled passengers would be the victims of the push for more trains, fewer delays, and fewer on-board and station staff.

Asked about the government facing possible legal action, a DfT spokeswoman said: “We expect all train companies to do everything possible to make travel easy for those with disabilities.

“It is vital that all passengers, including disabled passengers, can turn up and go when using public transport and train companies have a legal obligation to provide the same access to the disabled.”

She said DfT was working with the transport-user watchdog Transport Focus on research to identify the challenges facing disabled rail passengers, which will be used to improve services.