You are here: Home / Independent Living / Failed legal bid ‘shows UN was right to call for a right to independent living’ 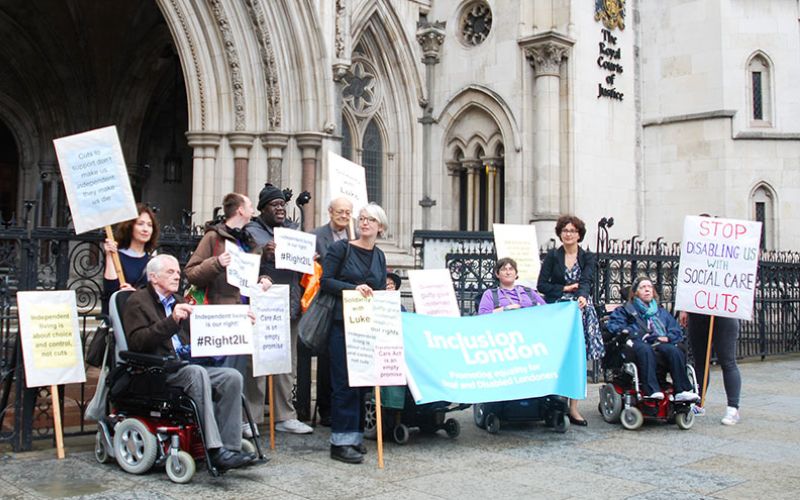 The case of a man who lost his legal bid to reverse a drastic cut to his support package shows the United Nations was right to call on the UK government to introduce a legal right to independent living, say disabled campaigners.

Luke Davey was seeking a judicial review of the decision of Oxfordshire County Council to cut his personal budget from £1,651 a week to just £950, following the closure of the Independent Living Fund in June 2015.

But Davey’s claim was dismissed by a high court judge in February and that decision has now been confirmed by three court of appeal judges, although he could still seek to appeal to the Supreme Court.

The court’s decision to dismiss Davey’s appeal came just 24 hours after a UN committee warned the UK was “going backwards” in respect to its independent living obligations under the UN Convention on the Rights of Persons with Disabilities (UNCRPD) (see separate stories), and called on the UK government to introduce a legal right to independent living.

The court had heard that Davey, who is 41, leads an “active and engaged life”, but that that had been put at risk by the proposed reduction in his care package.

Davey’s lawyers argued that the council had therefore breached its duty under the Care Act 2014 to meet his assessed needs, and would breach its duty to ensure his “wellbeing”. It was the first time a case about the act had reached the court of appeal.

The council argued that he could spend more time alone without a personal assistant (PAs), and that he should reduce the amount he paid his PAs, but Davey said this would increase his anxiety due to spending unwanted time alone, and would increase the risk of losing part of a long-established team of PAs.

But the three judges ruled that the council had acted lawfully in the way it had reached its decision to reduce his personal budget.

Inclusion London and the Equality and Human Rights Commission both intervened in the case.

Svetlana Kotova, co-ordinator of Inclusion London’s disability justice project, said the case confirmed the need for a legal right to independent living, as called for by the UN committee on the rights of persons with disabilities.

She said it demonstrated a “misunderstanding” of the meaning of independent living, with the council arguing that Davey should spend more time alone and reduce his dependence on his PAs as a way of becoming more independent.

Kotova said the case also demonstrated that the government should “urgently” bring in an appeals system – as provided for by the Care Act but not yet implemented – to allow disabled people to challenge the decisions of their local authorities when deciding the size of their care packages.

She said the judgement illustrated the “devastating impact” of the government’s policies, with many disabled people like Luke Davey who had been supported by the Independent Living Fund having their support packages “cut to the bare bone” after it closed.

She said: “With those cuts went their independence, choice and control and the opportunity to live a normal life.

“Today the court of appeal confirmed that local authorities can get away with doing this.”

She added: “Without adequate levels of support, more and more disabled people are existing, not living.”

She said this was one reason why the UN committee said last month that cuts to disabled people’s support in the UK had caused a “human catastrophe”.

Kotova said: “This case has destroyed any hopes that the Care Act 2014 will transform our experience of social care.”

She said it also showed how easily local authorities could “override” the wishes of disabled people about what was good for them.

She said: “It is time the government recognises and urgently addresses the huge crisis in social care, through ensuring adequate funding and the introduction of an appeals system, which would give disabled people a fair chance to challenge the views and decisions of social workers.”

Sue Bott, DR UK’s deputy chief executive, said: “The outcome of this case is very disappointing, although perhaps not surprising given the weaknesses of the Care Act.

“It demonstrates that the UN committee are correct in recommending that the UNCRPD needs to be brought into UK law.

“Only then can disabled people enjoy our right to independent living as set out in Article 19 of the convention.”

Yogi Amin, a lawyer at Irwin Mitchell, the legal firm representing Davey, said: “Luke and his family are disappointed that the council has cut his care package and is insisting that his longstanding carers should have their wages reduced to minimum wage, which he fears will force them to leave from the job they were doing to support him.

“They are now very concerned about the possible detrimental impact on his future care.

“Luke would like to have the support to meet his independent living needs which arise as a result of his disabilities.”

Ben Wilson, EHRC’s executive director, said: “For disabled people, the ability to live independently is one of their greatest concerns.

“We are disappointed for Mr Davey, especially in light of the UN’s damning assessment of the UK’s failure to protect disabled people’s rights.”

A spokesman for Oxfordshire County Council said: “We will continue to work with Mr Davey and his family to ensure he gets the provision of essential services he needs.

“The court of appeal has confirmed that the council’s assessment of Mr Davey’s care needs and the allocated amount for his personal budget is appropriate and lawful.

“All local authorities who provide adult social care services against a background of financial constraints in the public sector are having to make difficult decisions.”

Picture: Campaigners at an Inclusion London vigil outside the Royal Courts of Justice last month, on the day of the appeal