You are here: Home / Activism and Campaigning / Friends pay tribute to tenacity, wit and wisdom of Sir Bert Massie 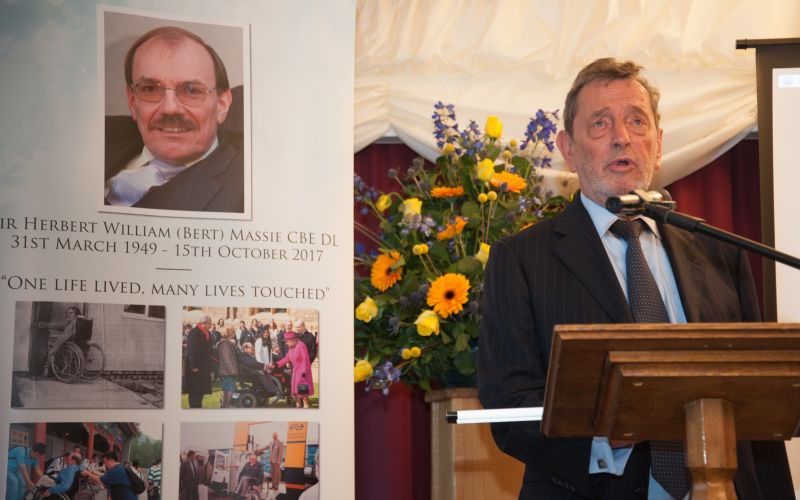 Disabled campaigners, MPs and peers have come together to celebrate the “wise counsel, charm and achievements” of the “remarkable” Sir Bert Massie, the former chair of the Disability Rights Commission (DRC) throughout its seven years, who died in October.

The memorial event in the House of Lords heard from a string of disabled friends and colleagues of Sir Bert, and other leading figures who had worked with him during his decades fighting for disabled people’s rights.

Many spoke of his work on the DRC, while others remembered his role in helping to secure civil rights for disabled people through the first Disability Discrimination Act in 1995.

The disabled crossbench peer Baroness [Jane] Campbell, who hosted the reception on behalf of Sir Bert’s wife Maureen, said they had not been able to find a room large enough for everyone who wanted to attend, which she said was “a huge testament to Bert’s friendship and formidable influence in the universal campaign for disability rights”.

She said she had “learned from his influencing style. Bert always had a game plan, pulling it off… sometimes without a trace of his fingerprints.

“He was a consummate strategist and was deeply flattered when I told him he would make a first-rate master criminal.”

Baroness Campbell said Sir Bert had taught her “a great deal about how to survive in the corridors of power and make positive changes”.

She said: “Negotiating and toying with ministers and prime ministers was his favourite sport.

“What’s more remarkable was that they became his greatest admirers.”

The disabled Labour peer Lord [David] Blunkett (pictured) said Sir Bert had made “an enormous contribution, not just to disability rights, but to ensuring that the voice of people with disabilities was heard in ways that it hadn’t been before”.

He told the reception that “navigating through all the organisations that speak for, on behalf of and with people with disabilities is an absolute nightmare”.

He said: “Speaking as someone who has a disability, you find that while the nation as a whole is full of awkward buggers, those working within the sector that deal with disability have an edge on everybody else.

“Bert had the temerity and courage to take on the task of working his way through this.”

Lord Blunkett said that the memory of “Bert’s expertise and his excellent way of persuading people to do things they didn’t want to do” and his “tenacity in keeping going over those years” should “light a candle and keep us all going”.

Sir Bert’s wife, Lady Massie, told the event that her husband had “never wavered fighting for the rights of disabled people”, and she paid tribute to his “wonderful achievements”.

Ann Frye, former head of the Department for Transport’s mobility and inclusion unit, and one of the event’s organisers, said Sir Bert had almost completed his memoirs, which she and Bob Niven – DRC’s former chief executive – had promised to complete and ensure were published.

She said it was a “very, very funny book as well as an emotionally moving book” and she promised to “make it a best-seller”.

Joe Hennessy, who worked with Sir Bert on the Disabled Persons Transport Advisory Committee, as trustees of the original Independent Living Fund, and as governors of the Motability scheme, paid tribute to his “wit and charm, his stubbornness, because you need to be stubborn when you’re campaigning in this business”, and his “quite remarkable contribution”.

Phil Friend, former chair of Disability Rights UK, told the reception: “How many of us now are living lives independently as a result of his campaigning [including for accessible taxis and buses]?

“He wasn’t alone, he was a great team player. He worked with a lot of other people.”

Friend paid tribute to Sir Bert’s “irreverent” sense of humour, and added: “I remember him with enormous affection, his journey was not dissimilar to my own [they both had polio as children] and I really do miss him.

“I think all of us in this room who had anything to do with him will be feeling both happy for him, in the sense that I think he is somewhere very accessible now, but for what he gave us when he was around.”

Labour MP Maria Eagle, who worked with Sir Bert when she was minister for disabled people and he was chairing DRC, praised his “wise counsel, his long memory and his great sense of humour and understanding”.

She said: “He was a fantastic Scouser, first and foremost.

“Given his upbringing and the way in which he was viewed… as a disabled person who had no potential when he was very young, the fact that he came through that to be the person that he was, to be so wise, to be such a people person, to be so completely able to understand and relate to anybody, to crack jokes, to have a laugh, and to understand precisely what was going on and what was the best way through difficult problems, was nothing short of utterly remarkable.

She said Sir Bert was “an absolute joy to know” and “a very accomplished man” and “never ever had a shade of upset or bitterness or negativity in his approach to anything, when he would have been perfectly entitled to have all of those things, given some of the unprepossessing ways in which he was treated because of his physical disability when he was very young”.

She contrasted his leadership and DRC’s “fine achievements” with the less impressive performance of the Equality and Human Rights Commission in supporting disabled people and advancing the cause of equality.

The Conservative MP Sir Peter Bottomley told the reception: “Bert really summed up things the way that I believe in them, which is that if you can do enough good, have enough fun, and [with] the things you fail at initially, just keep going and eventually they will give way. Well done Bert!”

Andrew Braddock, former head of access and mobility at Transport for London, who worked with Sir Bert on introducing low-floor buses for wheelchair-users, said Sir Bert was “undoubtedly a great man”.

Lord Sterling, the Conservative peer and co-founder of Motability, praised Sir Bert’s “pragmatic common sense”, and added: “It’s been a privilege and an honour to have somebody like a Bert Massie, part of us, ongoing, who will always be talked about.

“You never die when you’re a Bert Massie.”

Lord Borwick described how Sir Bert helped him make the London taxi the first wheelchair-accessible form of public transport in the UK, when the Tory peer was chief executive of Manganese Bronze Holdings.

He said Sir Bert had helped him “navigate the complex world of disability”, and he said he was “a remarkable chap and a great friend” and “a most astonishing man, a great man”.

He said: “Bert had this extraordinary ability to be the second most militant person on any subject.

“He would always make certain there was at least one other person who was much more extreme than him so that he was not only the second most militant person but the second most reasonable as well.

“He actually defined reasonable. By persuading somebody to make the taxi wheelchair-accessible, he was able to argue for accessibility to all other forms of public transport.”

John Hougham, former chair of ACAS, who was DRC’s deputy chair, said Sir Bert’s appointment of commissioners meant DRC was able to “hit the ground running” because of their “calibre” and “wealth and depth of experience”.

He said Sir Bert had been “pre-eminent” in ensuring DRC had taken the right legal cases, with the commission taking an average of 55 a year throughout its seven years, many more than the other rights commissions.

He said: “We managed to influence legislation in a whole range of fields, employment, access to transport, goods and services, and education.

“Bert never let us forget that running like a thread through all of our work – and this was a rock-solid belief – was that equality for disabled people was something that people should want to do, should want to aspire to, rather than be forced into it through compliance.”

He also paid tribute to the importance of Sir Bert’s leadership in driving forward DRC’s work on the new disability equality duty, which made it necessary to build equality into public sector policies and procedures “from the outset, rather than reacting to coercion or people bringing up complaints”.

This included an emphasis on disabled people being part of developing public sector policies, and not just being consulted on them but “being actively involved”.

Hougham said that an independent evaluation of DRC at the end of its seven years found it to be “a highly active commission which has achieved a great deal”.

He said: “All of us who were part of those achievements of those seven years felt and still feel extremely privileged to have had that opportunity of working with Bert, getting all those different achievements brought out into the open for the benefit of disabled people.”