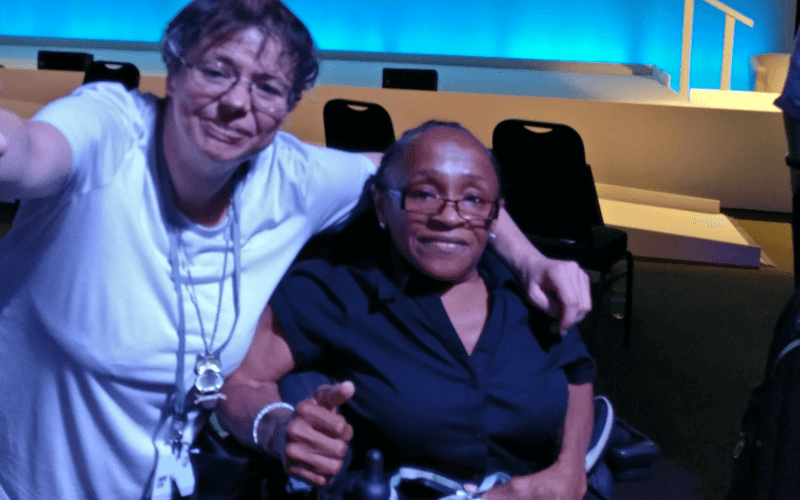 International development secretary Penny Mordaunt has been labelled a hypocrite and an embarrassment after attempting to redefine inclusive education at the international disability summit she was hosting in east London.

Penny Mordaunt’s government was already facing criticism from across the UK disabled people’s movement for its “blatant attempt to divert attention from its own disastrous record on human rights” by co-hosting the Global Disability Summit in east London.

The UN has made it clear that inclusive education means that all disabled children and young people are educated in mainstream settings and that the right for disabled students not to be discriminated against “includes the right not to be segregated” into special schools.

The UK government’s opposition to an inclusive education system dates back to the Conservative party’s 2010 election manifesto, in which it said its policy would be to “end the bias towards inclusion of disabled children in mainstream schools”.

Five years later, its general election manifesto boasted of how it had “created 2,200 more special schools places through our free schools programme”.

And last autumn, the UN committee on the rights of persons with disabilities was highly critical of the UK government’s approach to inclusive education, and the “persistence of a dual education system” that segregates increasing numbers of disabled children in special schools.

The day before Mordaunt’s comments, Laura Kanushu, executive director of Legal Action for Persons with Disabilities Uganda, told the Civil Society Forum – a sister event held the day before the Global Disability Summit, in the same venue – of the “challenges of governments still investing so much in special needs schools”.

She said: “Why don’t you make the mainstream schools inclusive rather than investing in building special needs schools? For us that has been a challenge.”

The UK government’s refusal to support inclusive education – at least in its own country – was always likely to be exposed during the summit after the Department for International Development decided that one of its four main themes would be “inclusion in education”.

The prime minister, Theresa May, in a video played to the summit, even called for “truly inclusive” education as a way of helping disabled people “play a full role in their communities”, although she was apparently only referring to disabled young people living in developing countries.

And in her closing speech, Mordaunt announced a new Inclusive Education Initiative – led by the UK – a “multi-donor partnership to support developing countries realise the promise of truly inclusive schools, teaching and learning”.

Michelle Daley (pictured, right) and Simone Aspis (left), interim director and policy and campaigns coordinator for The Alliance for Inclusive Education, said that Mordaunt’s comments were embarrassing and hypocritical.

Daley and Aspis said in a statement: “It is not just an embarrassment but also an hypocrisy for our government to tell the Global Disability Summit anything about inclusive education, especially when we are terribly failing many of our disabled children.”

They said it was “very concerning” that Mordaunt appeared to have redefined the definition of inclusive education in a way that did not comply with the UN’s definition.

They said: “The convention comes with an obligation to develop and implement an inclusive education system.

“However, our government continues to have a dual education system, refusing to make inclusive education a right, with an increase in the number of children being forced into segregated schools.

“It is time that our government starts to properly implement inclusive education as a human right.”

Richard Rieser, a leading inclusive education and international disability rights expert, who chaired a session at the summit, said the government was “clearly finding this an embarrassment”.

He said: “It is well-established under article 24 [of the UN Convention on the Rights of Persons with Disabilities] that inclusion is education in the local school in your community.

“What the minister [Mordaunt] said leaves the door open to segregated special schools.”

He pointed out that the UK maintained a reservation against article 24 of the convention, reserving the right for disabled children to be educated outside their local community, and an “interpretive declaration”*, which explains that the UK believes that the convention allows it to continue to operate both mainstream and special schools.

Only two other countries – Suriname and Mauritius – have placed reservations against article 24.

Rieser said: “This is the problem and the fear about the Department for International Development leading this [event] when they don’t understand the things we are arguing for as a world disability movement.”